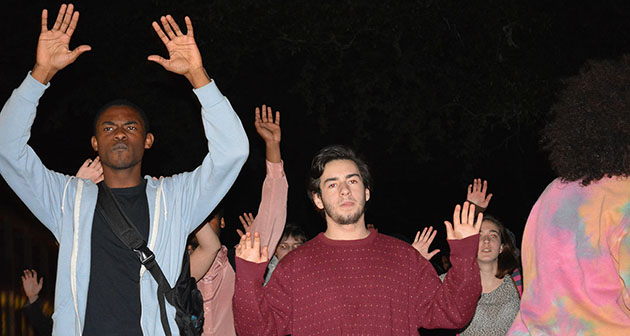 Shortly after the announcement that Officer Darren Wilson would not be indicted in the Michael Brown case, Loyola student and Ferguson native Etefia Umana began processing around campus with students chanting “Hands up, don’t shoot.”

The crowd, which started as 20 students, grew to over 100 as it passed through Tulane’s campus.

The protestors then marched back to the Marquette Lawn at the front of Loyola where, around 12:30 a.m., they knelt and took 4.5 minutes of silence just as Michael Brown’s family had requested from Ferguson protestors. This represented the four and a half hours that Brown’s body laid in the street after he was fatally shot.

On the Marquette lawn, Umana spoke to the crowd, thanking them for their support and urging them to work for social justice in economically disadvantaged neighborhoods nearby, like the Freret neighborhood near the two universities.

Umana urged the students to “challenge your institutions to live up to the mission statements they print in the pamphlets.”

After this, the protestors marched to Tulane’s Howard-Tilton Memorial Library.

“I’m down to march all night,” Umana said.

When the students reached the library, the workers did not allow the students to enter. The library officials called the Tulane Police Department, who blocked the doors even when protestors from Tulane held up their IDs amid shouts of “No justice, no peace.”

The standoff lasted ten minutes until Umana was allowed into the library, where he negotiated for another ten minutes with TUPD. Finally, students were allowed to process silently through the library’s entrance and around the third floor with their hands up.

After the protestors left the library, they applauded and continued to McAllister Drive, where they held a “die in,” tracing their bodies in chalk on the pavement and writing messages about the decision.

One of the protestors, music freshman Amber Oglesby, said that she wanted to protest because “the least we can do is give honor to Mike Brown’s life.”

Protestors proceeded to the new Tulane freshman dorm, around The Boot Bar and Grill and back to the university area, where the protest ended after 2:00 a.m.