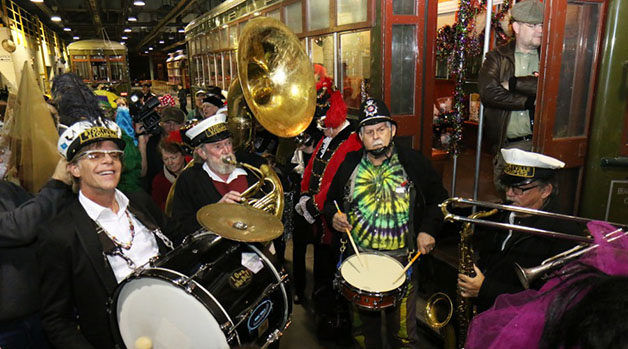 Storyville Brass Band plays at the Phunny Phorty Phellows parade on Twelfth Night. Crowds gathered around the streetcar line on St. Charles Ave. to see the band kick off the 2015 carnival season.

While the crowd on St. Charles Avenue was sparse, two new Loyola staff members braced the cold to watch the Phunny Phorty Phellows bring in Carnival season on Twelfth Night.

“I am just expecting craziness and wildness. I have heard so much about the parades and how the city just shuts down,” Oaks said.

With Twelfth Night starting Carnival, also known as the Mardi Gras season, the new year also brought in a new set of rules and amendments that the New Orleans City Council hopes will make Mardi Gras safer and more enjoyable for everyone.

The first set of rules sailed unanimously through City Council on Jan. 23, 2014 followed by the amendments on Aug. 14, 2014. Councilwomen LaToya Cantrell and Jackie Clarkson co-sponsored the new legislation that resulted in the tightening of pre-existing restrictions.

David Winkler-Schmit, spokesman for Cantrel, said that the new rules are meant to enhance the parade experience, not detract from tradition.

“Keep in mind that these new ordinances were developed in cooperation with the krewes and neighborhood associations as well as other concerned citizens,” Winkler-Schmit said.

A few members of the community expressed concern with how these new rules will be enforced. However, Winkler-Schmit said one of the benefits of the new rules is that it increases public safety during parade season.

“We’ve met with all of the enforcement agencies — NOPD, Treasury, Property Management — and they are all on track for enforcing the new rules,” Winkler-Schmit said.

Self-enforcement will play a large part in making sure these new rules really have an effect during Mardi Gras.

“We will need help from the public for enforcing the placement of ladders away from the curb, but last year’s parade goers were very appreciative about the ladder 6-foot setback rule, so we should see a lot of support with the self-enforcement,” Winkler-Schmit said.

Naasha Dotiwala, New Orleans local and political science sophomore, said she approves most of the new ordinances, especially the ban of roping off areas and forcing ladders and other personal objects at least 6 feet from the curb.

“I am a small girl. It is agitating to have to squeeze through ladders just to get close to the float or catch one of the throws,” Dotiwala said.

While the new rules may be a breath of fresh air for the old Mardi Gras revelers, those new to town, like Robinson, are just ready for the season to begin.

“I have no idea what to expect, except lots of king cake,” Robinson said.
2015 Mardi Gras Rules:

Throwbacks, tossing throws back at the maskers, now carry a fine of $250.
Private portable toilets are banned on public property, including the neutral ground. Companies that place toilets on public property will be subject to a $250 fine.
Parking on both sides of St. Charles and Napoleon avenues is prohibited starting two hours before the parade.
Ladders, tents, grills and other “personal effects,” must be at least 6 feet back from the curb. Ladders cannot be chained together.
Roping off private areas with ropes, tarps, chairs or anything else is banned.
The sale of “Snap and pop” type firecrackers is banned.
The city will issue no more than 30 permits each year, though all existing parading groups will be granted a permit if they paraded the previous year.