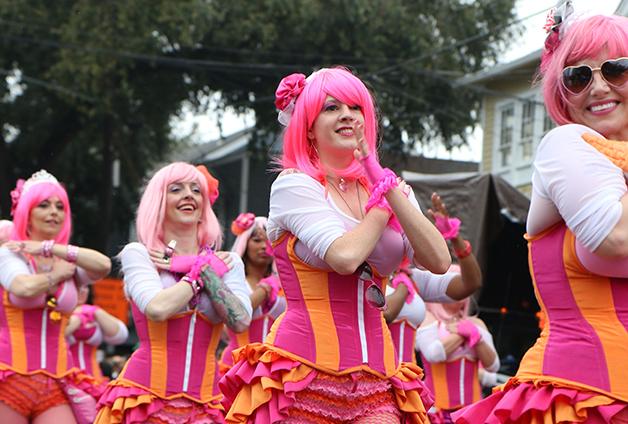 The Pussyfooters dance troupe strut down St. Charles Avenue during the 2014 Krewe of Carrollton. All female krewes and marching groups historically make up a significant portion of Mardi Gras celebrations.

Mardi Gras isn’t just about wearing flamboyant costumes, competing for the best throws or objectifying women for showing some skin.  In fact, women have a long and important role in the Carnival tradition.

An event exploring the role of women in Mardi Gras will be held at the Nunemaker Auditorium in Monroe Hall on Feb. 9. It is free and open to the public.

The event, “Mardi Gras Forum: The Women of Carnival,” will be presented by the Music Industry Program and will highlight the traditional role of women during Mardi Gras, including everything from all female krewes to marching groups.

Jim Gabour, music industry studies professor and one of the organizers of the event, hopes to display women’s unique development of their role in the Mardi Gras season and emphasize the importance of female involvement.

“We want to show that in spite of some popular misconceptions, traditional Carnival is not just an old boy’s club. Women’s contributions and long history of participation in Carnival is so often ignored,” Gabour said.

Among the marching groups will be the DIVAs, one of the leading marching krewes directed by Carol Miles.

“We all love to costume and have a good time,” Miles said. “We offer a gallery showing of our costumes every year. It’s fascinating to see what they look like up close. They are truly works of art,” Miles said.

According to Miles, although the main purpose of an all-female marching krewe is to have fun, it also involves giving back to the community through charity.

Miles said her krewe has selected breast cancer as their philanthropy this year.

“A portion of our dues is dedicated to donating to assist in eliminating breast cancer. A group of us formed Team DIVA and raised a substantial amount of money individually, and as a team, participate in an Avon Breast Cancer walk,” Miles said.

Seokyung Lee, mass communication junior, is an exchange student from South Korea and has never experienced a true New Orleans Mardi Gras. She said she is excited to see the all-female marching bands.

“It is specific, it is special and all female marching groups are rare in South Korea. Also, I like fashion and costumes, so I want to see them,” Lee said.

Representatives from Iris, the oldest parading all-women krewe, and Muses, the largest of the contemporary krewes, will also be present at the event, Gabour said.