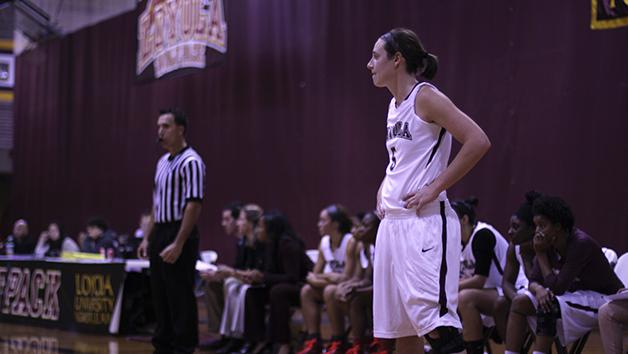 Rebekah Greer, psychology senior, waits on the sideline to enter the game. The women’s basketball team is looking to continue their success from the regular season into this year’s conference tournament.

As the women’s basketball team approaches the end of their season, players have their eyes on the prize.

After an Elite Eight loss in the national tournament last year, the team was seen as a pre-season favorite to be a national contender. However, the level of dominance at which they’ve played so far has come as a surprise to some of the players.

Brianna Oglesby, psychology junior, said she has always had high hopes for the team.

“I knew we were going to be good but I wasn’t necessarily expecting us to be playing at the caliber that we are. So it’s kind of a good feeling, especially at this point in my college career,” Oglesby said.

The team has shown a more balanced and potent offensive attack this season and have increased their scoring average from 71.3 ppg last season to 80.4 ppg, as well as their team assists from 13.5 apg to 16 apg.

Oglesby, who recovered from an ACL injury last year, is now coming into her own offensively and averaging 9.3 ppg., the fourth highest average on the team.

“It’s a good feeling, especially being able to contribute to the team in a bigger way this year,” Oglesby said.

This has called for some players, like sophomore guard Kylah Jones, to make sacrifices from their own individual games for the betterment of the team.

“My biggest adjustment would have to be just playing a different role on the team. Last year, I was playing in a bigger role than I am now. Having to come off the bench and still keep the team up and going is a big adjustment for me, but it’s one I’m embracing,” Jones said.

As their season comes to a close, players on the team are beginning to hone in on their individual roles.

“Right now, honestly, I’ve just been watching Janeicia, just trying to pick points from her so that I can be better than last year or how I’ve been this year,” Jones said. “I just want to do whatever I can to make this team as good as it can be.”

Head coach Kellie Kennedy said that even with their strong record this season and the national tournament approaching, the team hasn’t allowed their success to cause them to overlook any team on their remaining schedule.

The team will try to continue their success this season as they take on Faulkner University on the road Saturday, Feb. 14.