Out with a bang 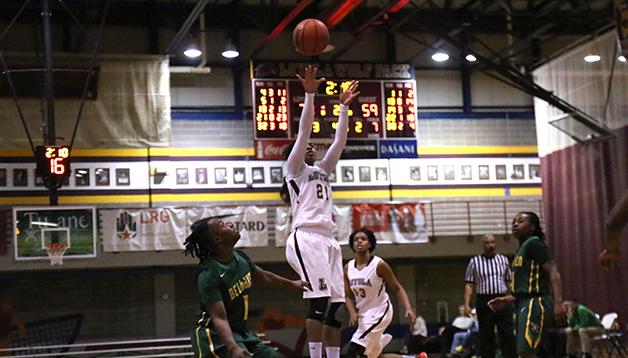 With a record of a 24-3 the women’s basketball team is now hoping for a storybook ending as they prepare for the SSAC tournament.

The team defeated Belhaven University, one of their toughest conference opponents, in The Den on Saturday, Feb. 28.

The senior players, like Rebekah Greer, were excited to finish their final game of the regular season with a win.

“It was an amazing feeling to beat Belhaven. I actually was talking with Janeicia before the game just saying it’d be sweet to go out against Belhaven and get a win,” Greer said. “It was sweet getting a victory senior night but it was even sweeter being against Belhaven, a team that we haven’t had the greatest record against the past two or three years.”

The coaching staff has also begun to reflect on the impact that this year’s senior class has had on the program.

Kellie Kennedy, the team’s head coach, said that this year’s senior players have been tremendous leaders.

“The wins and losses are great and those will stand as long as we keep records at Loyola in terms of athletics, but I think the biggest impact they have had is on the people around them,” Kennedy said. “Especially with their younger teammates being able to see how hard they’ve worked to be where they are, the character they have, and what they’ve been able to accomplish.

The biggest part of what they leave behind are the impressions on the younger players that they impact everyday.”

Even with the success they’ve had this season, the players have not allowed this win to distract them from the work that needs to be done in order to accomplish their long-term goals.

“It is important that our team comes out strong, plays hard and plays consistent each game,” Whittaker said.

Outside of a championship win, this year’s senior class has begun preparing for life beyond Loyola’s recreation center.

Janeicia Neely, mass communication senior, said that after graduation, she hopes to work in the New Orleans film industry and eventually become a producer.

“I would love to play professionally overseas if I get the opportunity. I think that’d be super fun. I’m sure I will stay involved in basketball one way or another,” Neely said.

Although basketball will continue to be a lifelong passion for all three senior players after graduation, Greer said that they understand the magnitude of the position they are in with their college careers.