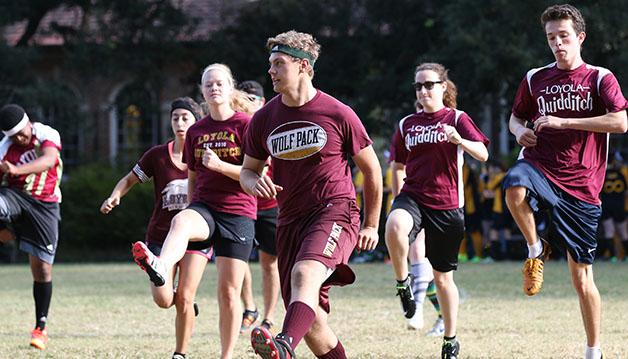 The Loyola quidditch team warms up before a weekend tournament. The team has now qualified for the Quidditch World Cup in Rock Hill, South Carolina and are looking to make a serious statement in the championship tournament.

After not qualifying for the U.S. Qudditch World Cup last year, Loyola’s quidditch team is back with a vengeance and looking to make some noise in this year’s tournament.

After playing in their regional tournament on Feb. 21 and 22, the team was able to win their entire pool, clinching a spot in the World Cup tournament next month — their first appearance at the Division I level.

While currently ranked 50th in the nation, Nik Jablonski, music industry sophomore and vice president of the quidditch team, said that his team doesn’t feel their standing is fully indicative of how well they have performed this year.

Keevy Narcisse, history junior and coach of the team, said that qualifying for regionals at the World Cup was a huge feat for the team.

“It was a feeling of gratification. The freshman felt like it was great because this is something really important that they wanted to accomplish in their first year. With the seniors, this is just an accomplishment of all the work they’ve put in all these years, and it was just a great feeling for the team to do something that we haven’t done before,” Narcisse said.

Co-captain Eric Jurgenson, economics and finance junior, said that the team is trying to hone in on what they need to do in order to compete in this year’s World Cup.

“We’ve got our skills, we’ve got our tactics, but it all comes down to just preparing and working hard these next few weeks and then going out there and fear no one,” Jurgenson said.

The team will play their first game in the World Cup tournament in Rock Hill, South Carolina on April 11.