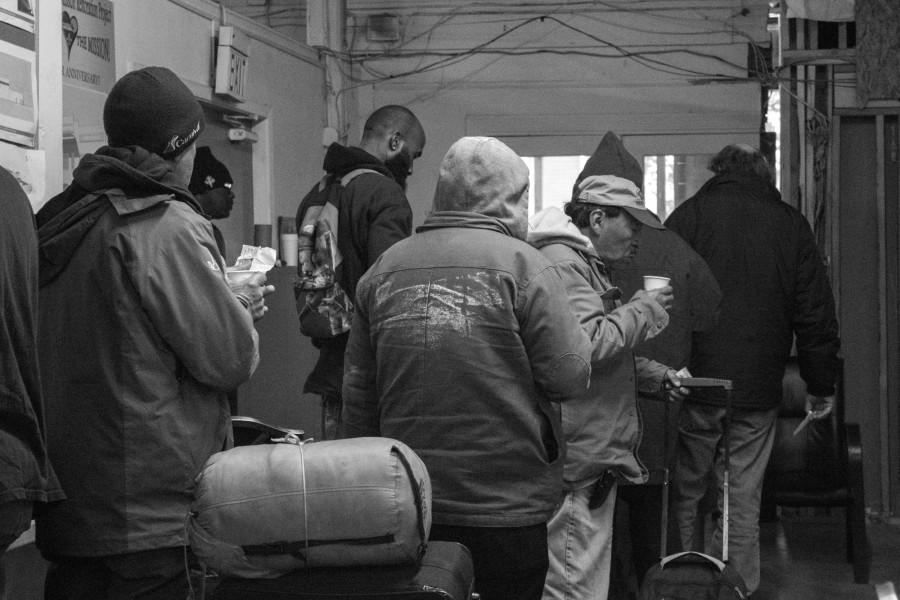 Men line up in their designated check-in line. Michael Smith takes their names for documentation. After check in the men continue to the chapel for a hot cup of coffee. Jan. 22, 2016.

Last winter, two people died from lack of shelter under freezing conditions. The citywide freeze plan hopes to prevent any more citizens from freezing to death.

In this plan, the city of New Orleans partners with four shelters to provide temporary shelter for homeless citizens.

John Proctor is the Director of Operations at The New Orleans Mission.

“We’re the largest shelter in the city so you can’t really have a freeze plan without us.” said Proctor.

The weather dictates the freeze plan. When temperatures drop below the threshold of 35 degrees, the city communicates with the shelters, and the shelters see to it that everyone has a warm bed.

Calvin Bernard keeps returning to the The Mission for shelter.

The Mission is prepared to house 200 people on any given night. During the freeze plan, the capacity limit grows to 400. Everyone that comes into the Mission gets a hot meal, a hot shower and a clean bed.

“Sometimes you have a few people who are hesitant coming into a place like this. You can’t force them in,” Brumfield said .

The Mission has an outreach team that goes into the streets to make sure everyone knows their options. Daniel Watts is the Outreach Coordinator at The Mission.

“We’re going to go out there and probably ride all night just to get them in … its gonna be hard for them to stay out,” said Watts.

The outreach team scouted at the Pontchartrain Expressway, the Claiborne Bridge and parts of the French Quarter.

In order to house the surplus, The Mission will bring cots from upstairs. The cots will be spread across the chapel and extend into the dining room if necessary. The men and women are separated during sleeping hours.

The Mission had no problem opening its doors earlier than the original plan, 4:30 p.m., to accommodate the quick temperature drop. Proctor said that there are usually between 10 and 20 freezes a year. This winter there have been three.

“We’re just going to keep our doors open until everyone that we can house safely is inside,” Proctor said.