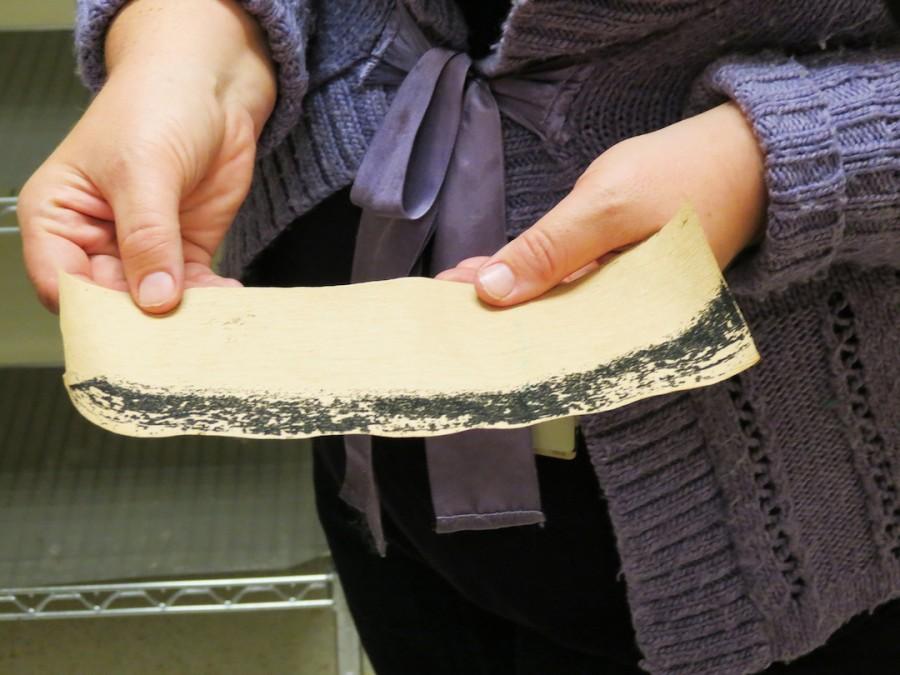 Sarah Michaels, entomologist at the New Orleans Mosquito, Termite and Rodent Control Board, holds a paper covered with mosquito eggs. Two of the species known to transmit the Zika virus are found in Louisiana.

Veronica Acevedo thought she knew how to take care of herself and her baby during her pregnancy, but then she found out about the Zika virus.

Acevedo, who is originally from Puerto Rico, said she traveled there twice during her pregnancy, once before the Zika virus was in the news, and once over Christmas. She knew traveling to the Caribbean was a risk because of the spread of Zika through the region, but she said she made sure to take all the precautions suggested by her doctor.

“At the time, it was something we were concerned about,” Acevedo said.

Zika is a mosquito-transmitted virus that can cause an array of mild symptoms, but has been linked to causing birth defects, such as microcephaly, which causes neurological problems and an under-developed head, if a pregnant woman is infected.

Acevedo said one of the things her doctor did after her trips to Puerto Rico was ask if she had gotten sick and check the measurements of the baby’s head to make sure there were no signs of microcephaly.

“The baby’s head was fine. Thank God and I didn’t get sick at all during the traveling, so I was pretty much safe,” Acevedo said.

“About 80 percent of people infected with Zika virus have no symptoms and are completely unaware that they’ve ever even had it. The 20 percent that do have very mild symptoms that typically resolve in a space of a week,” Nnedu said.

With the Centers for Disease Control reporting one case of Zika in Louisiana, Sarah Michaels, entomologist at the New Orleans Mosquito, Termite and Rodent Control Board, said they are continuing to monitor the virus since two of the species of mosquito that transmit it are found in Louisiana.

“We are concerned since we have the local species of Aedes aegypti and Aedes albopictus present. We could possibly have transmission from an infected individual returning to the New Orleans area,” Michaels said.

According to the Centers for Disease Control’s fact sheet on Zika, there have been 107 travel-related cases of the Zika virus in the United States as of Feb. 24.

Samantha Faulkner, press officer for the Louisiana Department of Health and Hospitals, said they are also working with health care systems throughout the state.

“We are keeping medical professionals informed with up-to-date information about the symptoms of Zika and when to test. We have a surveillance system in place, and Zika is reportable in Louisiana,” Faulkner said.

Faulkner said the fact that the majority of people in the United States have homes that are well-constructed and have mosquito screens will mean a lesser chance of Zika causing problems here.

Nnedu agreed that the risk is low for Zika to become widespread in this country.

“It does require warmer temperatures for you to really get the type of transmission that you’re seeing in South America and Central America here, and obviously we don’t have too long of a period of warmer temperatures,” Nnedu said.

Nnedu also said the amount of mosquito vector screening and control in the area will also work to protect residents from Zika.

Michaels said the Mosquito Control Board focuses on the mosquito side of the virus instead of the human cases, so they are working to increase their observation in areas they see as high risk and experimenting with different control methods.

“We’ve done aerial trials and we have had good efficacy with those. Additionally, we are looking at biological control alternatives; we have a history of working with cannibal mosquitos here. We are also bringing back those programs and ramping up our efforts,” Michaels said.

Michaels said residents should not worry, but should be aware of these species’ breeding habits.

“These two species really like containers around human habitation, and they breed in small bits of water, as small as a cap full of water, so look around your yard, and we say generally on a weekly basis, look for standing water and empty those containers,” Michaels said.

Faulkner emphasized the importance of residents playing a role in protecting themselves from the virus.

After taking all the precautions and getting reassurance from her doctor, Acevedo is not worried about Zika and is looking forward to giving birth to a healthy baby named Jose.