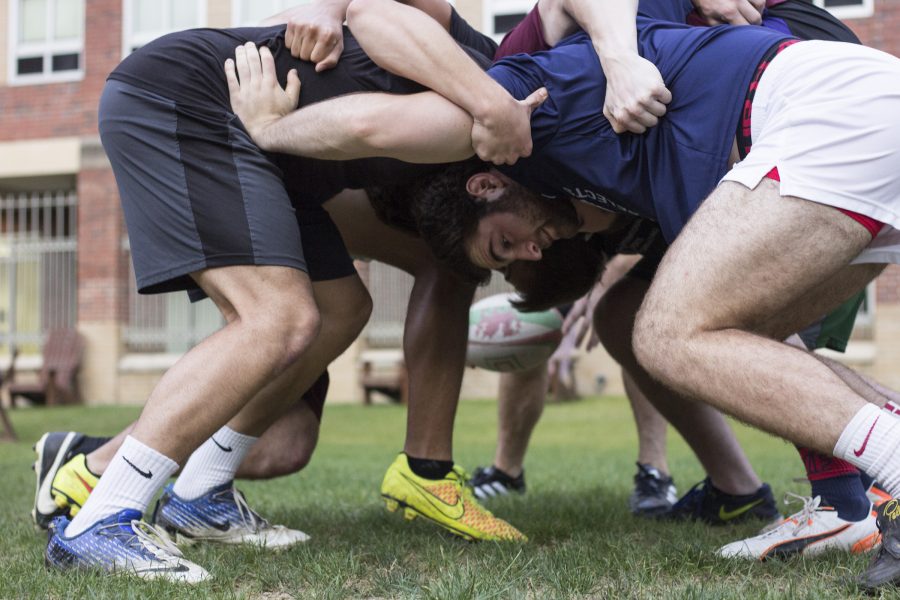 The Loyola rugby team practices a scrum during a team drill. The team will travel to Mississippi to take part in the Southern Mississippi 7’s tournament on Saturday, April 23.

After finishing first place in the South Alabama 7’s tournament, the rugby team still remains in the process of rebuilding a program that was ranked fifth in the nation just two seasons ago.

According to Jerry Malina, head coach, the team’s identity for the past two seasons could best be described as “a young rebuilding team.”

“Our program lost a lot of leaders mostly to graduation and since then we have been a young rebuilding team that has shown continuous improvement,” Malina said.

The team’s continuous improvement was put on display last weekend at the South Alabama 7’s tournament as they defeated D1 schools such as Florida State, Southern Mississippi and South Alabama University before defeating Tulane in the championship.

“We’ve been practicing since September. Us putting in the hours all year has led to us finally being able to win some games,” Lithgow said.

Malina said that the team will have a chance to compete on a national level this year after competing with much larger and higher division schools in order to gain confidence and experience.

“Our goal is always to get back to the top of the division whether it be this year or the next,” Malina said.

Lithgow agreed with his coach’s goals for next season and said that the team is capable of being one of the top teams in the division.

“I definitely see the team getting better. Next year, we can definitely be one of the top teams in the nation,” Lithgow said.

The rugby team will travel to Mississippi to take part in the Southern Mississippi 7’s tournament.