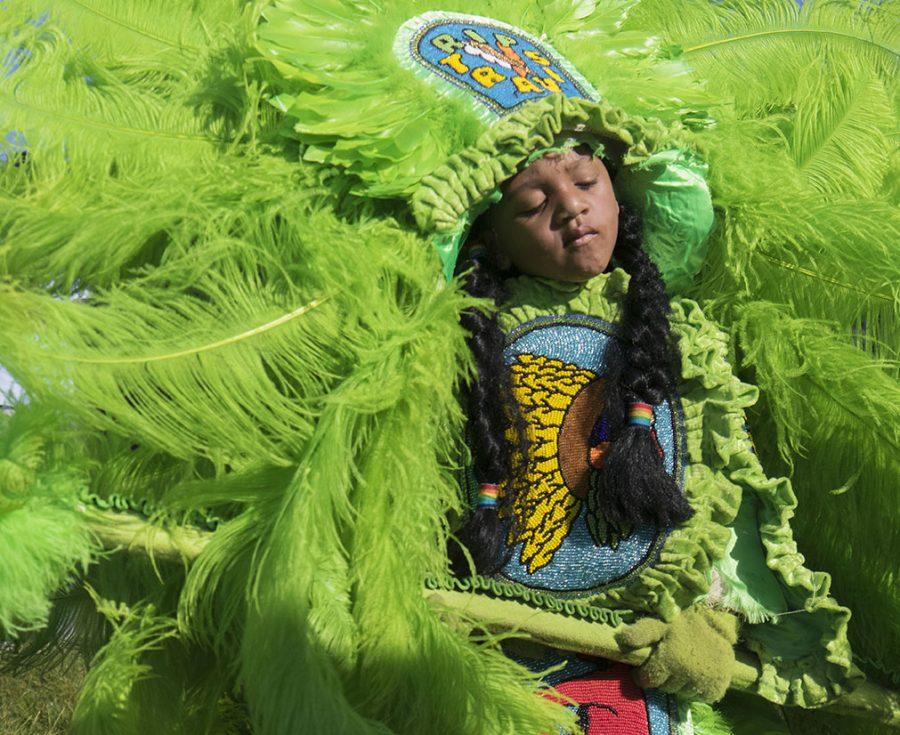 Joshua Charles Jr. of the Red Hawk Hunters listens to the Cha Wa Band on the Jazz and Heritage Stage at the 2016 New Orleans Jazz and Heritage Festival. Skies were clear and weather was mild for the first weekend of the annual festival.

The New Orleans Jazz & Heritage Festival is often a beacon of hope for students throughout New Orleans amongst the slew of final papers and exams, promising a chance to enjoy internationally renowned stars alongside a final dose of local artists before the Summer break.

For the most part Jazz Fest functions much like other festivals, with the obvious caveats–if you want to see someone particularly badly leave with plenty of time, make sure you bring enough cash along (and sunscreen) and ensure that you experience plenty of musicians that you were unaware of before arriving.

Upon my arrival last Sunday, getting from the front gate of the Fair Grounds Race Course into the heart of things was a surprisingly easy process. Likewise, finding my way around was reasonably simple given the elliptical shape of the venue, but the guide was reasonably priced at $5 and doubled as a handy memento.

My goal was to catch a performance at each stage, as well as looking around the plethora of craft stalls and food vendors–no mean feat given that music only runs from the late morning to the early evening. What quickly became clear is that the food is almost as important as the music, with New Orleans favorites like Ms Linda and Mona’s Cafe populating the mass of stalls available. What was particularly satisfying was the aesthetic consistency between the stalls, ensuring that my choices were made based on what sounded most delicious as opposed to bright colors and flashy signs.

The adage ‘it has something for everyone’ is overplayed at best, but if you have any inclination for the arts–be it woodwork, African jewelry, fried bread demonstrations or (unsurprisingly) music– you’ll find something to satisfy your tastes. Conversely, Jazz Fest also gives you the opportunity to push your boundaries–rather than setting up camp at the Acura Stage for the day, check out the Blues Tent, or the Belize Pavilion. Venturing outside of my comfort zone to the Gospel Tent I was impressed by the sense of community that was assuredly conveyed over such a large distance and between strangers. Everything from the sharply dressed musicians to the seated masses clapping in time led to a musical experience quite unlike anything I’d experienced up until then, and yet simultaneously I have no doubt I was missing several other unique experiences across the festival.

Admittedly, it was disappointing to see how stuffed the Fair Grounds were, and as the day drew on the number of people reached near breaking point. Beyond the obvious annoyances this brings in terms of moving anywhere, it also feels like money grabbing with a disregard for the health and safety for the revelers.

Jazz Fest is a festival defined by sun soaked skies and presenting New Orleans at its best, so the scale of the crush for Red Hot Chili Peppers wasn’t just frustrating but damaging. Fortunately, where Jazz Fest shines is in remembering its heritage; posters, paintings and photos of Jazz Fest performers new and old cover the festival, and so when J Cole appeared on stage wearing a Prince t-shirt, it felt like confirmation that those assembled wanted to pay respect to their musical history whilst also having a good time.