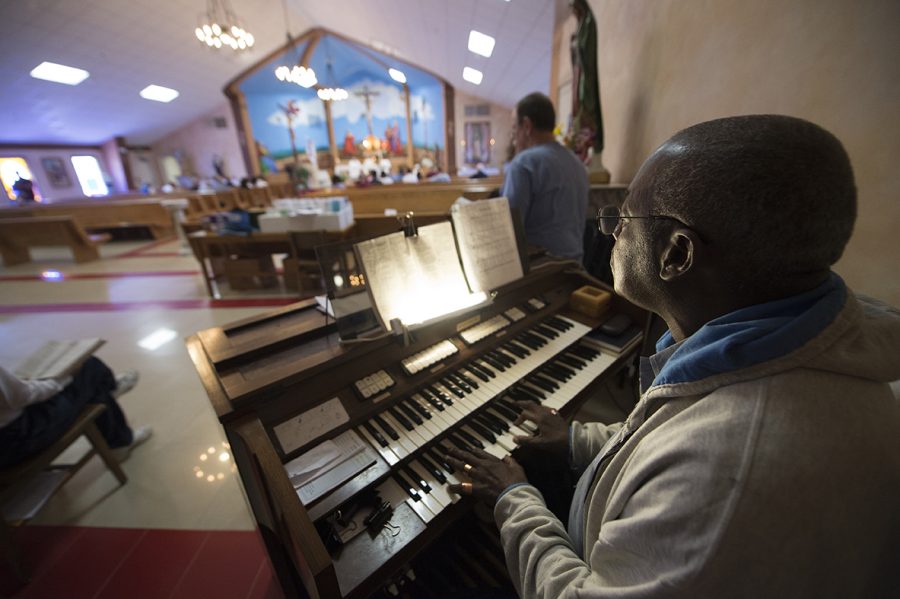 Angola inmates lead music at a mass in the prison’s Our Lady of Guadalupe Chapel April 29. The mass included the graduation of six inmates from the Loyola Institute for Ministry’s extension program with certificates in pastoral studies.

William Kirkpatrick smiles, blue eyes glimmering over his faded cheekbone tattoo. It’s a sunny, breezy day at the Louisiana State Penitentiary at Angola, Louisiana, and this former death row inmate has just graduated from the Loyola Institute for Ministry.

Kirkpatrick was one of six inmates to graduate from the LIM extension program on April 29 with a certification in pastoral studies.

The graduates, along with their facilitator, Rick Bebin, also won the Kairos Award, given to one exceptional LIM class each year.

“I would never have even imagined myself in ministry,” Kirkpatrick said after the graduation ceremony.

Kirkpatrick dropped out of school in junior high, but since coming to Angola and having his death penalty sentence reduced, he has focused on education and caring for other inmates.

He has pursued multiple religious education programs and teaches in the prison.

Kirkpatrick hopes to use his new certification to return to death row as a peer minister.

Reflecting on the extension program’s effect, Kirkpatrick said, “LIMEX has greatly enhanced our ability to minister and our ability to live out our faith in every situation, and in an environment that can be trying to say the least.”

Angola is the largest maximum-security prison in the United States and houses 6,000 inmates, the state’s death row for men, and the execution chamber for men and women.

Because the men earn less than one dollar per hour for their labor on “The Farm,” one of Angola’s nicknames, Loyola raised funds to educate the inmates for free, using donations from the Diocese of Baton Rouge and a grant from Our Sunday Visitor. Loyola hopes to host another program like this, provided the funds are available, said Tom Ryan, director of the institute for ministry.

Each student in the program chose a focus area, Ryan said. Graduate Herman Tureaud, who has been in Angola since he was 15 years old, focused on youth ministry.

Herman works on the popular confirmation retreats Angola hosts for high school students from the Diocese of Baton Rouge. His favorite part of the Loyola Institute for Ministry class was the heated discussions over how to interpret different readings. He said he liked to see the way the students’ cultures influenced their interpretations.

He recalled that controversial topics like women priests and how to approach abortion intensified the class’ conversation, but, he said, “We’re a brotherhood, so it never got bad.”

Instead, Tureaud reflected, “It was a beautiful experience of getting to know one another.”

Louisiana lawmakers are now debating how to apply a January Supreme Court decision that might open the possibility of parole to juvenile offenders who, like Tureaud, are serving life sentences without parole.

Tureaud is hopeful that he might be released from prison and said that he would like to minister to teens who are in the situation he was before his arrest.

When asked if he would return to minister in his former neighborhood in Algiers, Tureaud said, “It really doesn’t matter as long as I’m doing God’s work in the capacity I’m able to do it in. I don’t want it to be about me.”