Students ask university to divest from fossil fuels and prisons 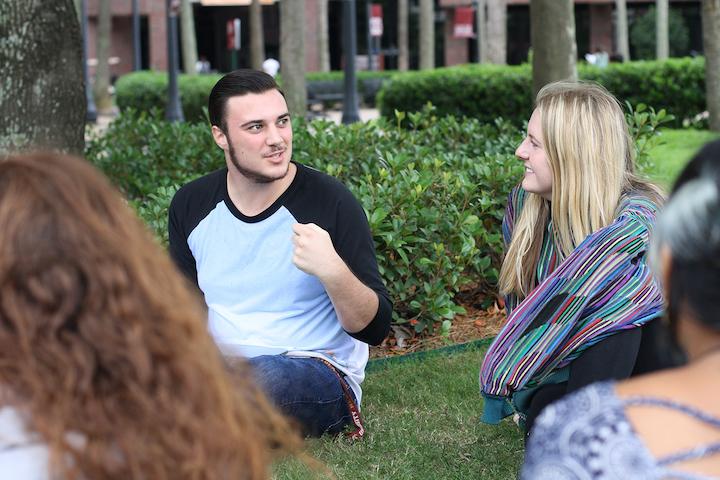 Austin Rickel, music industry studies sophomore, addresses the Divest Loyola organization on how to raise awarness about the initiative. The movement aims to convince Loyola to divest from fossil fuels and private prisons.

Divest Loyola, a student-led movement, is working to encourage the university to pull its investments from the prison and fossil fuel industries.

Although the school’s investment portfolio fluctuates, as of the end of 2015, Loyola had roughly $13 million invested in the fossil fuel industry and roughly $532,000 invested in Corrections Corporation of America, the largest private prison in
the country.

At the same time, in their ethical investment guidelines, they state that “Investments held by the University will be examined periodically to ascertain whether the firms involved engaged in practices or procedures opposed to the ethical, social, and moral principles deriving from Loyola University’s heritage.”

In response to this, the Divest Loyola movement is calling for transparency about what industries the university invests in, and divestiture from the private prison and fossil fuel industries.

Colin Martin, environmental studies senior, started Divest Loyola in 2013. They have taken many steps to pressure administration to divest. They most recently collected over 300 signatures on a petition in support of divestiture, and organized a meeting to present the petition and outline the goals of the movement.

The group met with several people, including the Rev. Kevin Wildes, S.J., university president and Jay Calamia, vice president of finance, as well as representatives from the board of trustees and the marketing department.

Martin said the group believes that it is problematic if Loyola’s investments don’t line up ethically and morally with their professed values.

“Divest Loyola is a student-led coalition saying that because Loyola University is founded on Jesuit values and a platform of social justice, the student body should hold Loyola accountable. We would rather see the university invest in alternative energies, or mutual funds that screen out fossil fuels. But we don’t just want to see the administration pull the investments and reinvest them, we’re also calling for transparency to the student body,” Martin said.

“The private prison industrial complex disproportionally impacts communities of color in Louisiana, and Louisiana is the incarceration capital of the world. The fossil fuel industry is contributing to the rapid sea level rise and displacement of front line communities in the gulf coast specifically. These are issues that are going on in our backyard and that’s what makes Loyola important in the fight for divestment. We’re right here; if anyone’s going to be taking action it should be us. We should be leading,” Martin said.

Nicole Eggers, assistant professor of history, said divest movements date back to when student protests in the 1980’s influenced universities to divest from South African companies to support South Africans rallying to bring about the end of apartheid.

She pointed out that South African businesses are a smaller investment opportunity than fossil fuel industries. At the same time, she said she believes it is possible for the students’ efforts to cause change and that it’s an important issue.

“I think that transparency is incredibly important and I do think that a Jesuit university has to live up to their ideals in how they are investing their money. With the for-profit prisons it’s an easier question, I think that yes, they should divest. With oil it’s a much harder question. It could potentially minimize returns on the investments that build the endowment, and in that sense it narrows the operating budget of the university, unless those costs get diverted somewhere else. So it has that potential problem, but then you think of the ethical potential,” Eggers said.

Wildes was not available for an interview, but sent a campus-wide email as a result of the meeting with Divest Loyola which said that Loyola will consider ethical investment decisions, and that he will recommend changes.

“I have decided to begin conversations with the trustees and members of the Finance Committee in support of the following initiatives,” Wildes wrote in the email.

He said these initiatives include committing to transparency of investments, taking necessary steps towards divestiture from private prisons and figuring out a time frame for divesture.

Martin said Divest Loyola feels that Wildes’ email is a small step in the right direction.

“The issue with Fr. Wildes’ written public response is that in the ethical guidelines, the talk of Christian stewardship regarding investments that has been so broadly worded that apparently investments in the private prison industry and the fossil fuel industry are somehow still currently acceptable. In this email there is no specified timeframe for when this discussion will come to a conclusion. Divest Loyola believes that these are issues that need to be addressed immediately with specific guidelines and timeframes,” Martin said.

Patricia Murret, associate director of public affairs, and Laura Kurzu, vice president for marketing and communications, said the divestment processes that other universities have started have proven that divesting from indirect funds that include fossil fuels would be difficult because that means divesting from all major funds.

“It is essential to understand that the only body empowered to make investment decisions on behalf of Loyola University New Orleans is the university’s Board of Trustees. And, they are legally bound to be good stewards of university finances for the long term,” Murret said.

Kurzu and Murret said the issue is on the agenda for the Board of Trustees’ meeting in May.