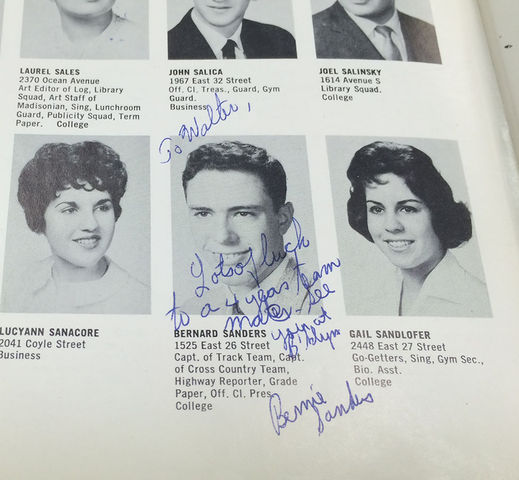 Nick Reimann/The Maroon Walter Block shows his yearbook from James Madison High School in 1959. Pictured is a signature and message from his track teammate, Bernie Sanders.

Sports teams have been known to build lifelong friendships, but for Walter Block and Bernie Sanders, the day they walked away from their final track meet in June of 1959 was the last time the two would really be on the same team.

Today, Block, Harold E. Wirth eminent scholar endowed chair in economics at Loyola, is one of the leading academics in the field of Austrian economics, a libertarian stance that discourages government intervention in the economy, while Bernie Sanders is seeking the Democratic nomination for president as a self-described “democratic socialist.” But at one time, the two shared similar views, growing up together in the same Brooklyn neighborhood.

Walter Block and Bernie Sanders were born less than one month apart, Walter coming first on August 21, 1941, with Bernie following on September 8. Both came from similar lower-middle class, Jewish backgrounds, which during the 1950s was a haven for American leftism.

“I have a friend, Murray Rothbard, who says that his family were all commies and the big question was: ‘Do you carry a communist card or not?’ My family wasn’t quite that leftish,” Block said. “But my Aunt Tilly was a card-carrying communist and the rest of the family was sort of leftish-Democrat.”

It was during this time that on numerous occasions Bernie Sanders claims to have had his political views shaped, and Block too for a time felt the influence of the environment.

“I was a socialist, lefty, progressive, what have you,” Block said.

The two would share these views during the four years they spent together at James Madison High School in Brooklyn, a public school that is home to a remarkable list of alumni, including Supreme Court Justice Ruth Bader Ginsberg, comedian Chris Rock and U.S. Sen. Chuck Schumer, as well as four Nobel Prize winners. It was during their time there that Block and Sanders first became acquainted with each other.

“We lived in a similar neighborhood, so we’d sometimes walk to and from school,” Block said. “We were also both on the track team together. He was the captain of the track team, he was one of the best runners in the entire city. I was a mediocre runner. But we would go to track meets together, be on the bus together and we’d talk. I wouldn’t say we were best friends, but I’d say we were good acquaintances or slight friends.”

Daniel Jelinsky, retired CPA who served as co-captain of the 1959 track team with Sanders, says that while he wasn’t very close with either him or Block, he still recalls Bernie Sanders’ leadership on the team.

“Bernie is somebody I interacted with a lot since we were on the same relay teams quite often,” Jelinsky said. “And Bernie was somebody who was always for the other guy, always for the underdog, always looking to make sure everybody had something.”

Although Jelinsky believes that the team could have been better, he felt that they were a strong team, and even though a future presidential candidate and future political economist were among its members, he doesn’t recall politics being a major topic of discussion. Neither does Block.

“I think we mostly talked about girls and sports,” Block said. “A little politics. I agreed with Bernie then. He hasn’t changed his views. His views were left, liberal, progressive, socialist, as were mine. At the time, we had very similar views, so we wouldn’t have any real arguments over political things. But I think we were more interested in girls and sports than politics, or at least I was. He was probably more interested in politics, looking back on it.”

After graduating from James Madison High School as part of the class of 1959, Block and Bernie Sanders then spent a year together at Brooklyn College, but the two began to drift apart after Sanders transferred to the University of Chicago in 1960. While Sanders spent time as an activist for the Young People’s Socialist League in Chicago, Block’s views were about to radically change.

“We weren’t bosom buddies after he went to Chicago. When we started to drift apart, it was me that was doing the drifting,” Block said. “His views in high school and his views now are roughly the same. My views changed when I was a senior at Brooklyn College and Ayn Rand came to lecture and I came to boo and hiss her because she favored free enterprise and everybody knew that free enterprise was horrible.”

During her visit to Brooklyn, Ayn Rand, author of the novel Atlas Shrugged, which is held by many libertarians to be one of the most influential works of libertarian thought, held a study group where she invited anyone that was interested, an invitation that Block accepted.

“I went and I pushed my head between Ayn Rand and Nathaniel Branden, and I said ‘There’s a socialist here who wants to debate someone on socialism and capitalism,’ and they said ‘Who is it?’ and I said ‘Me,’” Block said.

Branden, a psychotherapist and then follower of Rand, accepted Block’s offer–on two conditions. The first was that the conversation had to be focused on the debate between libertarianism and socialism. The second was that Block was to read two books: Economics in One Lesson by Henry Hazlitt and Atlas Shrugged by Rand. Block read the books, and following several visits to Rand’s house in Manhattan, Block said he was converted.

“So I drifted apart from Bernie in this must have been 1963,” Block said. “And I became a libertarian then.”

In the years since, Block has fully embraced libertarianism, authoring over a dozen books and becoming one of the most respected economists in the Austrian school. He now serves as the Harold E. Wirth eminent scholar endowed chairman in economics at Loyola. He is also a senior fellow at the Ludwig von Mises Institute, an Auburn, Alabama-based libertarian organization, whose other Senior Fellows include the likes of Ron Paul and FOX News analyst Judge Andrew Napolitano.

Mark Thornton, Ludwig von Mises Institute senior fellow, said through his time at the institute, as well as his many publications supporting the ideals of libertarianism, Block has become one of the most well-respected individuals in his field.

“Walter Block is respected among Austrian and mainstream economists, as well as academics outside of economics for his contributions, rigor, tenaciousness and objectivity,” Thornton said. “One complaint I have heard is that Walter is politically incorrect. I do not see merit in this complaint because political correctness is just one aspect of Cultural Marxism and is unscientific. It should have no place in academia where you should be free to think outside the box and to express your thoughts. Political correctness is just 1984 thought control. Walter should be honored for his courage,” Thornton said.

For Bernie Sanders, though, socialism is still the path he chooses. After leaving the University of Chicago, Block’s former trackmate made a move to Vermont to embrace a more rural lifestyle. While there, he ran multiple unsuccessful campaigns as part of the small, socialist-leaning Liberty Union Party. Sanders left the party in 1979, and as an Independent, successfully won the 1980 Burlington, Vermont mayoral election. He would continue in this role for two terms before moving on to the U.S. House in 1991, and ultimately the Senate in 2007.

Bernie Sanders and his views now shine fully in the spotlight as he continues his campaign to become the Democratic Party nominee for president in 2016. Even though Bernie Sanders prides himself on consistency in his views throughout his life, Walter Block is not hoping his old track mate is successful with his efforts.

“He’s a commie! Or a fascist, whatever! He’s crazy!” Block said. “His economics–minimum wage is horrendous. Minimum wage will unemploy the very people he wants to help. Making college for free, I mean I’m in favor of making everything for free. I wish we didn’t have any scarcity and everything could be for free, but what he’s planning on doing is taking money from rich people and giving it to poor people, which we call theft,” Block said.

Block said that the last time he had contact with Sanders a few years ago. During this time, they agreed that their political views had diverged from each other’s.

For Drew Brekus, economics sophomore and a student of Block’s, the irony that Block and Sanders were once friends seems so absurd that it’s amusing.

“I think it’s really funny,” Brekus said. “They have such polar opposite political views, so it’s really telling of how he started out at the same place, and like 20 years down the line, how dissimilar you can be.”

Sanders plans to continue his campaign all the way to the Democratic National Convention in Philadelphia in July. Block is currently working on several books, most notably one about the privatization of outer space.

The Sanders campaign did not respond to request for comment on this story.