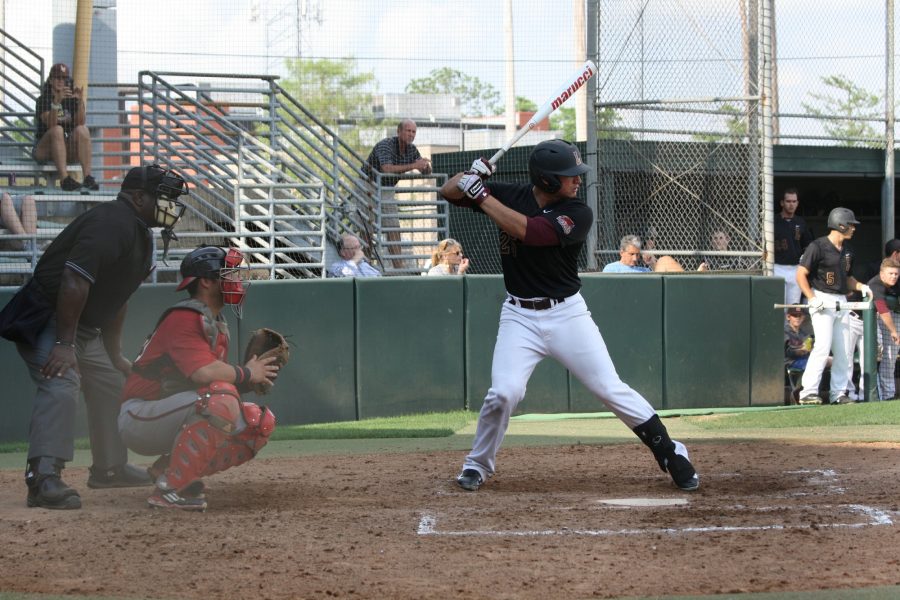 Luis Anguizola bats for Loyola during his junior year. Anguizola was drafted to the MLB this year. Photo credit: The Maroon

Former Loyola baseball player Luis Anguizola is one stepping stone away from making his dream a reality.

“Making it to the big leagues is a dream that every kid playing baseball has,” Anguizola said.

The Panama native recorded one of the best individual seasons in Loyola baseball history as he led Loyola to its first ever Southern States Athletic Conference (SSAC) Championship game in May.

“Once I finished high school I wanted to continue my studies, and that’s why I came to the USA and played college baseball where I was going to get an education and also get a chance to play pro ball in the future,” Anguizola said.

Due to an incredible junior season at Loyola, Anguizola was drafted in the 25th round of the 2016 MLB Draft by the San Diego Padres.

Anguizola said that is was a hard decision that he had to make whether or not he’d come back to school for his senior year or chase his dream of making it to the big leagues.

Anguizola is just the second Loyola player to get drafted since 2000 and just the 6th overall in school history.

“Luis was a great teammate. He was a quiet leader, didn’t say much but he led by example. He was always full of energy and worked hard at every practice and game,” Faust said.

Faust also admits that while it is going to be hard to replace Anguizola, he knows that his team is abundant with players who are capable of stepping up despite losing one of the best baseball players in program history.

“Luis will be difficult to replace and we do not have another Luis on our roster. However, we have other guys that will be ready to step up and fill the void,” Faust said.

“He is now surrounded by players as good as he is or better than him, all with the same goal. I think he has a legitimate chance to move up through the different levels but it is extremely difficult for any player to make the Major Leagues. We will continue to pull for him and hopefully he gets to the Big Leagues one day,” Faust said.

“I’m working hard every day like I have been my entire life. I’ll work hard and put time and effort into this game and see what the game has in store for me in the future,” said Anguizola.

Faust claims that Anguizola is one of the best players that he’s coached throughout his coaching career.

“I’ve coached seven players, including Luis, that have been drafted into the MLB. One of my former players made it to the major leagues. At this point, I would put him top three. He is definitely the best pure hitter I have ever coached,” Faust said.

After having one of the most successful seasons in program history, Faust is leading his young team into another season full of promise and high expectations; only this time without one of the program’s most accomplished players, Luis Anguizola.