Uptown Pikachu statue vanishes as quickly as it apppeared 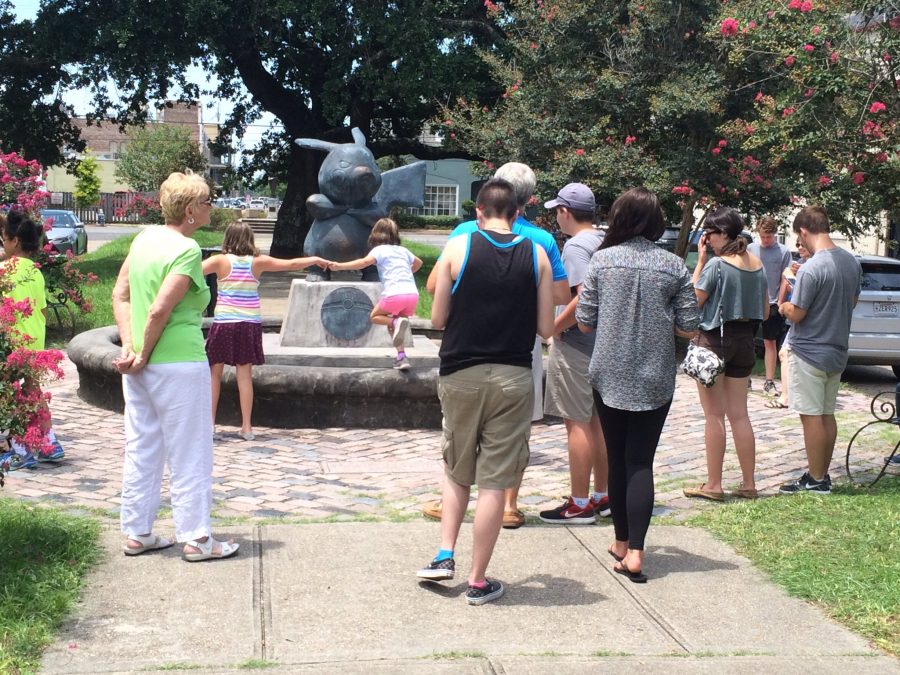 A mysterious sculpture of an iconic Pokemon creature became a local sensation in the Garden District, only to be removed by its anonymous makers without warning two weeks later.

Lower Garden District residents were confounded early July 31 after finding that an imposing statue of the franchise mascot Pikachu had appeared overnight in Coliseum Square near the intersection of Terpsichore and Prytania, fitting perfectly in a defunct fountain.

The statue, which was made of a fiberglass that resembled bronze, arrived as an homage to the augmented reality phenomenon Pokemon Go, an app that peaked at over 25 million users in mid-July. Pikachu is one of the most sought-after creatures in the game, encouraging players to traverse outdoors to hunt Pokemon on their phone screens.

The creators of the statue remain completely unknown, leaving behind nothing but the hashtag #pokemonument by the statue, which attracted fans from all over the city to the installation when the tag became a trending topic on social media.

Although the statue was not sanctioned for the park, the Coliseum Square Association was more than happy to have the “stealth sculpture” become a local attraction. Karon Reese, vice president of the association, noted the installation was a welcome addition to the community.

“The neighborhood has been treated with the presence of a new, whimsical statue that has brought fans and families to visit our district from all over the country,” Reese said.

While many fans and neighbors responded positively to the statue, posting pictures of themselves smiling with the defiant Pikachu, not everyone in the city responded warmly to the mascot’s presence.

A day after its appearance (August 1st), an Instagram user captured video of a woman attacking the statue at night with what appeared to be a baseball bat. Structural damage was reported to Pikachu’s tail. On August 5th, graffiti was found on the statue’s body, which was promptly removed.

Not due to the vandalism however, was the statue’s disappearance from its stead. The Pikachu vanished from Coliseum Square Aug. 14, left with the hashtag #pokegone.

A square barcode found by the statue linked to a statement from the artists revealing that the statue was never meant to be a permanent installation. The statement announced that the statue will be auctioned, and the proceeds will be donated to The Coliseum Square Association to restore local green spaces and fountains in the Lower Garden District.

Metairie resident Spencer Hogue visited the statue the day before it was taken down, and explained that he was sad to see Pikachu leave, but was even more impressed that the artists wanted to elevate their installation from a prank to a positive community donation.

“Like everyone, I loved visiting and posing with the Pikachu while the Pokemon fever is at an all-time high. It’s a shame that the sculpture won’t be around anymore, but I think it’s remarkable that the artists had a real initiative and appreciation for the location they used. I’d love to see something similar take off within the city, but I don’t know if we will ever see something take off like that again,” Hogue said.

The artists noted that they were stunned by the response the statue received, and hoped their work will make a tangible impact on the community.

“Public sculpture, whether sanctioned or not, has the potential to transform and energize community spaces. When we stuck a Pikachu statue into the middle of a dry fountain on Terpsichore Street, we could not have imagined that it would attract so much attention, that the momentum would carry its image around the world,” the artists said in a statement.

The Neal Auction Company will auction the fiberglass Pikachu statue on Sept. 25 with all the proceeds benefitting the Lower Garden District Parks and Foundations Fund.