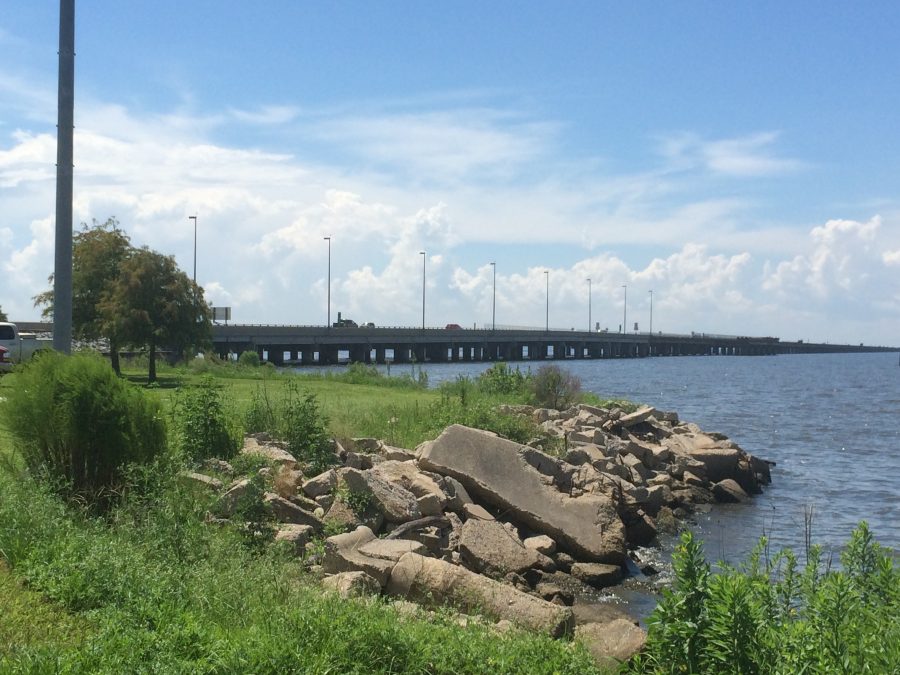 Commuters crossing the Lake Pontchartrain Causeway, seen here from the Northshore, will soon have to pay more to cross the bridge. Photo credit: Nick Reimann

Causeway commuters are preparing to foot the bill as tolls are set to be raised from $3 to $5 for those paying cash to cross the bridge.

Lake Pontchartrain causeway officials voted in favor of the increase in a meeting on Aug. 10. In addition to the increase for those paying cash, tolls will also be increased for those who cross the bridge with a toll tag, which allows frequent commuters to prepay and avoid toll lines, from $2 to $3 per crossing.

The increases, which will not take effect for several months at the earliest, are intended to be used to fund increased safety on the bridge, according to Causeway Commission general manager Carlton Dufrechau.

The two spans that make up the Causeway, which largely remain in the same condition as when construction of the second span finished in 1969, contain no shoulders where commuters can pull over. In addition, the rails have been shown to be substandard, especially on the southbound bridge, which has seen 14 vehicles go overboard since 1994 and resulting in 11 fatalities.

Dufrechau blames this on the era when the bridge was engineered. Dufrechau says that one out of every two vehicles that cross the bridge today are “high-profile” trucks or other large vehicles, but when the southbound bridge was designed in the 1950s, it was only intended for smaller vehicles with lower centers of gravity.

With the increase in tolls, Dufrechau said his team will be able to modernize the bridge’s railing. In addition, plans are in the works to address the lack of shoulders, but they will not be along the whole bridge. According to Dufrechau, adding shoulders along the entirety of the Causeway would cost around $1.8 billion, and would require tolls to be increased in excess of $20. Instead, the Causeway Commission plans to put six 672-foot shoulders along each span that would be staggered along the bridge.

And while causeway officials are ready for the toll increase, many of the commuters who occupy some of the 12 million vehicles that cross the causeway each year aren’t too happy.

“I think it sucks,” said Kim Guardiola, owner of the Baskin-Robbins on S. Carrollton who commutes from Mandeville every day. “I think it’s unfair. How long have we been paying tolls on the causeway and they haven’t given us an emergency lane, but they’ve done all that stuff on the Huey P.?”

And though Parker supports the idea of improving the Causeway, he feels this isn’t the way to do it.

“There’s got to be another way,” Parker said.

But Causeway Commission general manager Carlton Dufrechau doesn’t think so. Dufrochau believes that raising the tolls is well worth it, and has a message for those who are critical.

In any case, the only way improvements will be seen on the Causeway is if St. Tammany and Jefferson parishes, over whose water the bridge is located, agree to bond measures that would loan the causeway money for the improvements. The Causeway Commission then plans to repay the parishes with the revenue they receive from the increased tolls.

This plan may have a glitch.

Jefferson Parish councilman Chris Roberts is seeking for the toll increase, funded via the bonds, to be decided by public vote. Roberts cites the 2013 referendum on Crescent City Connection tolls as precedent for such a move.

The Crescent City Connection tolls were abolished in that vote.