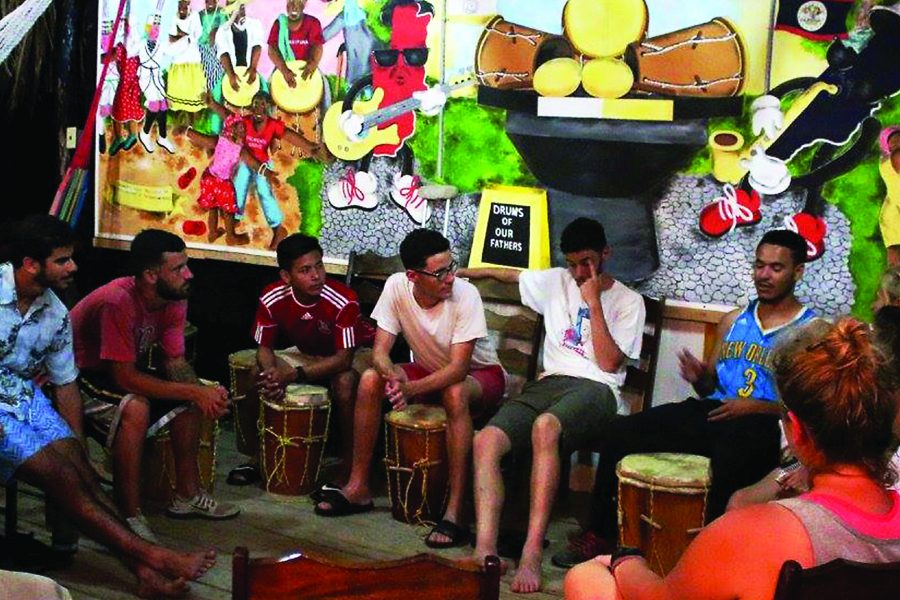 Loyola students and alumni teach drumming at a music program they established in Belize. The Belize trip was established because there were previously no university programs for music in the country. Photo credit: Courtesy of the Rev. Ted Dzak S.J.

Even in remote areas of Central America, the Jesuit ideals of compassion and respect for the world have been upheld thanks in part to Loyola Ignacio Volunteers.

This summer, 11Loyola students and alumni accompanied University Chaplain the Rev. Ted Dziak, S.J. and College of Business professor Kendra Reed in an engaging service trip to Belize, where the volunteers established both a music clinic at Delille Academy in Dangriga and a sports clinic for students of Holy Family Primary School in Hopkins village.

Kendall Cousin, A’15 was one of the Wolf Pack alumni who instructed the music clinic, and felt very accomplished seeing his fellow volunteers impact education.

“I am incredibly proud of not only myself, but the rest of the team to put together a program that hasn’t been done,” Cousin said.

In just one week, Wolf Pack volunteers taught Delille Academy students how to write lyrics, arrange compositions, learn their instruments and both record and perform a song.

The idea for holding a music clinic for Belizean students was born out of necessity, as the country currently has no music degree program in any institution. Upon realizing this, Dziak and Victoria Vega, associate dean of the College of Music and Fine Arts, set up an initiative between Loyola University New Orleans and St. John’s College in Belize City to establish a music degree program by fall 2017. The university hopes the clinic will further encourage Belizean students to pursue music in their lives.

The sports clinic was also deemed successful, with over 200 students joining in at Holy Family Primary School. The students practiced and played basketball, soccer and volleyball, culminating in a final tournament for each sport.

Dave Thomas, business junior, was taken aback by the beauty of the country and humbled to help assist the community.

“The simplicity of Belize was one of my favorite parts of the country. Everybody I met was excited to learn and live, and didn’t take their lives for granted,” Thomas said.

Students explained that the immersion trip was transformative, especially as alumni. Madeline Janney, A’16 noted that the lessons this experience gave her came at the perfect time.

Janney has been to Belize three times now and said she considers the trips the defining experience of her time at Loyola.

“This trip was the perfect way to wrap up my undergraduate career and begin my post-graduate life. Having these experiences has helped me clarify my goals, interests and values, which is what ultimately led me to where I am now—pursuing my master’s degree in communication sciences and disorders so that I can work with children in a teaching role,” Janney said.

The international immersion trip was a sterling example of Jesuit ideals and dedicated mission service work, and impacted the Belizean students as much as the Loyola alumni.