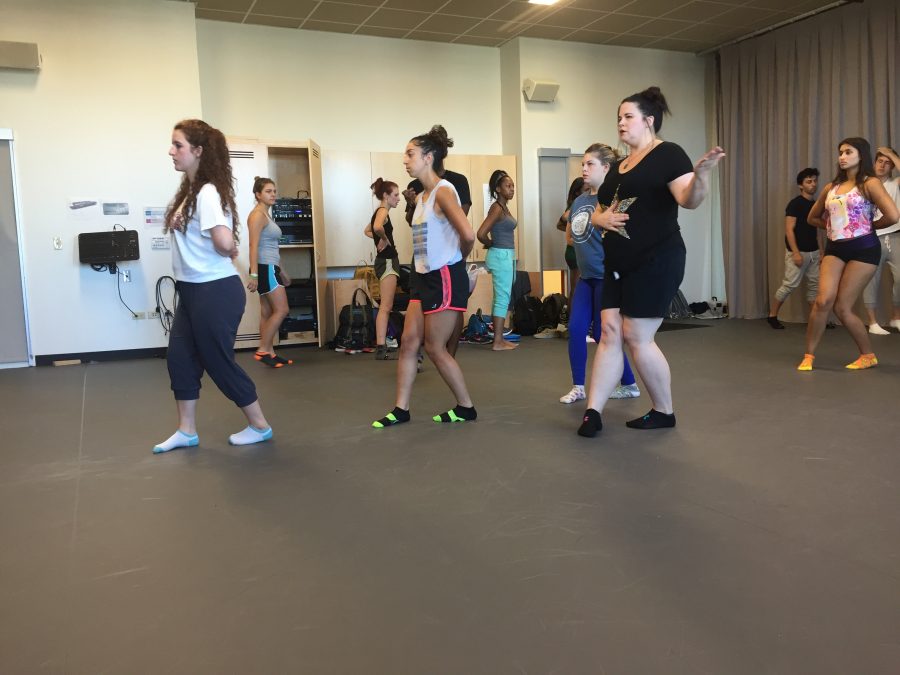 Kadar (in black) demonstrates a Suzuki movement exercise as her class practices.

In 1986, Ann Mahoney Kadar landed her first ever gig as an actress. At ten years old, she earned a spot in Loyola’s stage production of Fiddler on the Roof, a minor role that became the start of a lifelong career. Today, thirty years later, Kadar can still be found on campus, acting, chasing down new roles and helping her students do the same.

Kadar is a mother of two, a professional actress and a professor in Loyola’s department of theater. When she’s not traveling for work or caring for her 3 year old daughter and 8 year old son, the New Orleans native is teaching students how to manage the reality of life in the acting business.

“You’re juggling,” Kadar said. “That’s what actors have to do. There’s a lot to balance in life.”

Last year alone, Kadar auditioned for 54 different roles, most of which came in the same cluster of weeks. This was on top of playing Olivia, a reoccurring character in AMC’s mega show The Walking Dead, a mom in the recent film Bad Moms and characters in various other productions.

This means that in any given week, Kadar can have less than two days to memorize multiple scripts in between playing taxi-mom to her kids, teaching her students and handling whatever else comes her way. Then, she has to convince a room full of casters to give her a job.

It’s the routine of a working actress; full of auditions, callbacks and, often, waiting on nothing. Kadar takes these experiences into teaching, and informs her students about every one of her auditions, good and bad.

“No one tells you if you don’t get the part,” Kadar said. “Out of those 54, I got three. You’re going to fail. It’s what you do over and over again. That’s why I keep them up to date on my auditions; the ones I get and the ones I don’t.”

By showing students her failures, Kadar, who started teaching at Loyola in 2012, brings the less glamorous side of the performance industry to the classroom.

Ronald Chavis, a 2016 Loyola theater graduate and employee in the Office of Student Involvement, met Kadar his freshmen year, and he still attends her class to train and offer assistance.

“It was important to me to have a professor who’s still working. It’s like, you are who I aspire to be,” Chavis said. “She shares her experiences, and they tell me that I’m doing something right.”

Whether it’s performing in regional theater or traveling to Comic Con with the rest of the The Walking Dead cast, Kadar consistently supplies her students with professional lessons. With each, she emphasizes persistence, balance and toughness. It is something that Chavis, an aspiring actor, said he takes to heart.

“You can learn to deal with it and be fine with it, or give up. People like Ann teach us not to give up,” Chavis said.

These values–balance, toughness and persistence–are all directly attached to the Suzuki method of voice and movement, a unique acting technique that Kadar specializes in and is teaching this semester.

The Suzuki method of acting is a highly stylized and physically intensive approach to stage movement and vocal training, developed by Tadashi Suzuki in Japan in the 1970s.

The method involves moving the body in a completely controlled and purposefully fashion, keeping the core engaged while focusing on posture to generate the most power for speaking. Like acting, it requires balance, flexibility and determination to stay standing.

When earning her MFA in the late 1990s, Kadar trained under Eric Hill, a friend of the founder Suzuki, and one of the first people to be certified in teaching the technique. Starting with his instruction, she has spent the last 20 years perfecting the method and sees it as a necessity in acting.

“I can always tell when actors have had some intensive movement training. They have real precision to what they do, and real depth and subtlety,” Kadar said.

In Monroe Hall on Tuesday and Thursday mornings, blasting music, the stomping of Kadar’s bamboo stick on the floor and sweat-drenched students indicate that the Suzuki workshop is in session.

Kadar leads by example, with her Suzuki exercises and her professional demeanor. She demonstrates the movements first, then pushes the students to meet her time-tested standards.

“Everything in Suzuki is a difficult position, and in those positions we ask you to relax,” Kadar said. “If you’re falling over, you’re doing something right. You’re pushing yourself.”

Laura Hope, a fellow professor of theatre, has known Kadar since she started at Loyola, but began working closely with her after becoming chair of the department last January.

“She is a terrific colleague,” Hope said. “Not only an enormously talented performer and gifted instructor, but also a supportive, kind, and positive colleague. I’ve sat in on her classes, and I think we are incredibly luck to have her.

Sitting in a one of Kadar’s Suzuki workshops is revealing. She creates an intense environment not often associated with acting, where her calls to “slow down, Go full circle! Good!” embody the demands of the industry.

“I think it is fantastic for the students to get a glimpse of life for a working actor, and to be able to work with somebody who has current experience on the demands and requirements for actors in the field of film and television,” Hope said. “I think too often students are unaware of how much hard work, discipline, and preparation is needed to be a successful working actor.”

At the end of class, Kadar sits her students down, goes around one-by-one and has them locate the part of their body with the most tension. For her, being self-aware goes with success.

“The roles that are yours, are yours. If you prepare, no one can take it from you. If a role isn’t yours, it is not yours,” Kadar said.

Kadar’s can be seen next playing Elvis Presley’s mother on Million Dollar Quartet, a drama series premiering on the Country Music Channel in November.