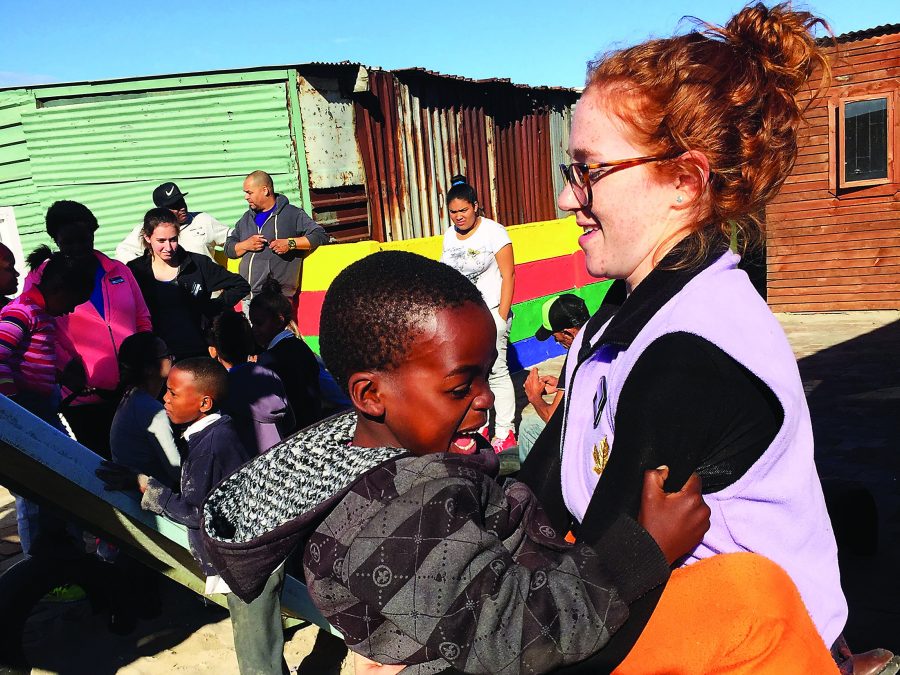 Emily Mastin A'16 plays with a child in South Africa. Mastin worked there with Iggy Vols this summer. (Image credit: Emily Mastin)

Service, community and culture are just a few of the things students experienced during this summer’s Ignacio Volunteers program.

This summer, 10 Loyola students embarked on a journey to Cape Town, South Africa to serve the impoverished elderly and youth and explore the political and economic issues at play there.

Emily Mastin, A’16, said that a great part of the trip was being able to do service while getting to know the country’s history and its people.

“We learned a lot about the country’s history of apartheid; that was an extremely valuable portion of the cultural immersion,” Mastin said.

Like Mastin, Victoria Williams A’16 said that because of historical similarities, discussing and seeing the injustices in South Africa comparatively to America was interesting.

“I talked to people much older, especially in a recent post-apartheid country, and I heard life stories that I’m not used to hearing,” Williams said.

In Cape Town, the volunteers visited and worked at Fikelela and Baphumalele Children’s Centers, spent time with the elderly and children at the Nazareth House and helped out with a feeding program for the homeless.

As team leaders, both Mastin and Williams have traveled with Ignacio Volunteers a total of three times. They say that while some aspects of each trip were different, others remained the same.

Mastin said that one of her favorite things about traveling with Iggy Vols is the sense of community that is built among the volunteers.

“We all become so close and it’s so amazing to experience another culture with a group of people who are so open minded and eager to get to know new people and places,” Mastin said.

Williams said that cooking and serving the community gave the group an opportunity to further bond, but one particular part of the trip served as a bonding experience.

“We bonded throughout the trip, but I really enjoyed hiking Table Mountain with people. Such a strenuous experience was a different type of bonding, but still valuable,” Williams said.

Overall, the trip served as an opportunity for students to gain a new perspective on how they see the world and each other.

For Mastin, traveling with a group of strangers allowed her to expand horizons and renew her perspective.

She said while life can move fast and seem overwhelming, the trip showed her how much more is out there beyond her everyday bubble.

“Cape Town was a humbling experience that will create a thirst for adventure and an intense desire to give what you can to others whenever possible, and inspire you to open yourself to what others have to give to you,” Mastin said.

According to Williams, each Iggy Vols trip has left her with a lesson. She said love had been a previously reoccurring theme, and this time, the theme is community. She said that although the lesson was reinforced, she learned a lot about communities.

“It’s interesting how communities can be formed, and they become a family. Communities are based in love and experiences; we should all be welcoming to new communities,” Williams said.