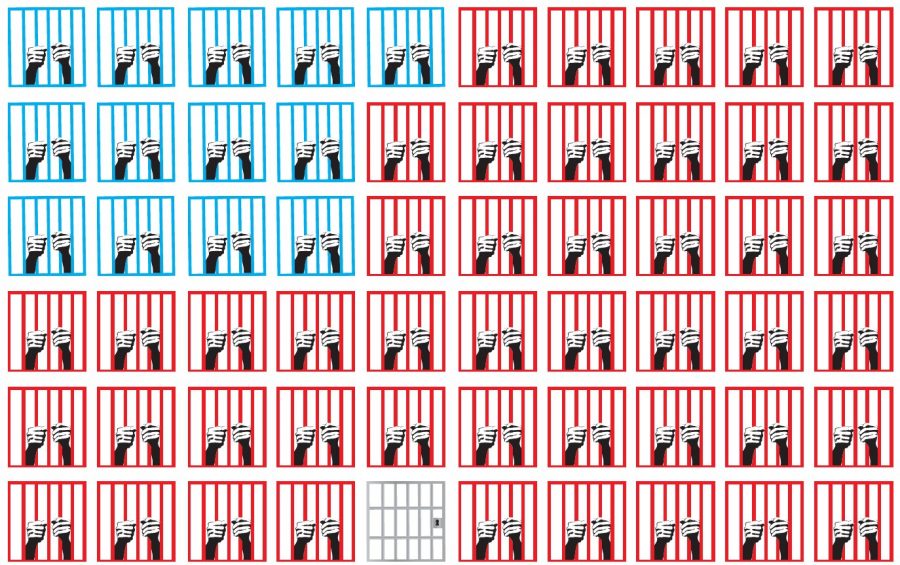 The Department of Justice announced in August that it would not renew its contracts with the 13 privately-run federal prisons in America, represented by the blue bars. The 46 private detention centers holding inmates for Immigrations and Customs Enforcement, shown here as red bars, will remain open. Photo credit: Naasha Dotiwala

What is the value of a human life?

Apparently it’s $81.23 per day, according to the fees paid to the largest private prison company in the country, the Corrections Corporation of America. That’s how much the company makes per inmate per day, its 2015 financial report said. After expenses, the company pockets $24.61 for every day an inmate is in one of its facilities.

In many cases, according to a report issued by the Jesuit Social Research Institute, many of the people held in those facilites aren’t even criminals. In many cases they are people being held on immigration violations, awaiting rulings on whether they have legal standing to stay in the United States.

Omar Hassan, a Somalian refugee living in Phoenix, Arizona, waited 14 years for a ruling on his appeal to stay in the U.S. As a refugee, he could not be deported to Somalia, but ICE tracked him down at work anyway and took him to a private detention center in Florence, Arizona, the report said.

“I had never been in detention in my life. I had never even been in a police station in my life. I am scared. They don’t tell you what they are doing. You feel that you are at the mercy of someone else’s hand. It makes you feel like someone from another planet. There was no humanity in it. There was no nothing in it,” Hassan told JSRI in a 2011 interview from the shelter for homeless immigrants where he was living.

Hassan was detained in Florence for five months.

“I don’t have a criminal record. I don’t even have a traffic ticket. And all I did since I came here was work,” Hassan said. He said his work permit had not expired.

“If this is happening to someone like me, it can happen to anyone else.”

Private prisons, such as the detention center highlighted in the report, have rapidly fallen out of favor among college students and the Department of Justice alike.

Environmental studies sophomore Anthony Rizzi is a member of Divest Loyola, which spearheaded the push to for the university to divest from private prisons and fossil fuels.

Rizzi said that the Rev. Kevin Wildes, S.J., university president, had agreed to divest some of the university’s endowment from the private prison companies in which it holds shares, including the Corrections Corporation of America.

“Progress can always be done faster, but we are making progress nonetheless,” Rizzi said. “We’re just going to keep working with Fr. Wildes to divest as much money as possible.”

Students aren’t the only group opposing private prisons. The Department of Justice also announced last month that it would either limit or not renew its contracts with for-profit federal prisons, after a department study found the prisons to be less safe and less effective than those the government runs. This means that within the next five years, all 13 private federal prisons the Justice Department oversees will not have their contracts renewed.

The movement to divest from private prisons has gained traction in part because the companies are seen to have a vested interest in keeping incarceration rates high, even though mass incarceration disproportionally affects minorities. More inmates means more profits for the prison companies.

Since the Justice Department’s decision to let its contracts expire, the Corrections Corporation of America’s stock value has nearly halved, motivating more investors to jump ship.

Still, the Justice Department’s decision won’t affect the many private prisons holding inmates for Immigration and Customs Enforcement, which is a branch of Homeland Security, not Justice.

Immigration and Customs Enforcement, or ICE, accounted for nearly a quarter of the Corrections Corporation of America’s $1.7 billion revenue last year, according to the corporation’s financial report. Over the last three years, ICE has provided a larger proportion of the company’s revenue — a number that may continue to grow as the Department of Justice pulls its funding from the company.

ICE has used prison-like detention centers operated by private prison companies like the Corrections Corporation to hold its inmates since 1987, when privatization was growing to accommodate the increasing numbers of prisoners jailed during President Ronald Reagan’s “war on drugs,” according to a report from legal information website FindLaw.

ICE uses the detention centers to ensure that immigrants who are being considered for removal from the country are present at their hearings and, if they don’t have legal standing to stay in the U.S., that they can be deported.

Private detention centers now handle about two thirds of the immigrants detained by ICE — around 33,000 inmates per day in 46 facilities, according to a report by The Intercept, an online news site.

These 46 facilities will remain open while only 13 private prisons run by the Department of Justice lose their federal funding.