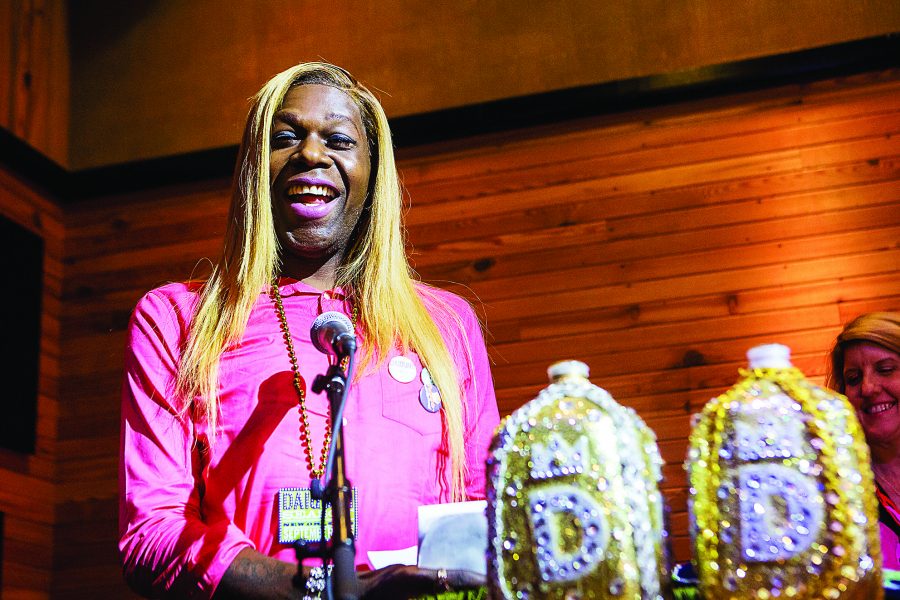 New Orleans music celebrity Big Freedia announces the Duke and Duchess of The Daiquiri Sept. 13 at the Ace Hotel. The winners of the first ever daiquiri competition were selected out of 43 different specialty drinks submitted by bars and restaurants participating in Daiquiri Season. (Courtesy of Josh Brasted)

Traditionally, September in New Orleans marks the start of the Saints’ season for football fans, the back-to-school season for students, and for bars and restaurants, the slow season. This year, however, the month of September is also the Season of the Daiquiri.

New Orleans Daiquiri Season is a new month-long event put on by the local festival organization Tales of the Cocktail and dedicated to one of the city’s most famed beverages: the frozen daiquiri. The inaugural season lasts from Sept. 1 to Sept. 30, and features over 40 participating bars and restaurants around New Orleans hosting various events, offering specialty cocktails and competing for the title of Duke and Duchess of the Daiquiri.

Ann Tueenerman, founder and executive director of Tales of the Cocktail, is the creator and organizer of Daiquiri Season. After learning about a local weekend daiquiri festival in New Orleans, Tueenerman saw an opportunity to expand.

“The season used to be a one-day event in the Bywater that featured daiquiris. We took it over last year and had a different vision,” Tueenerman said. “Our goal was to push business into the bars and restaurants.”

Starting as the annual New Orleans Daiquiri Festival in 2011, founded by event strategist and current Tales of the Cocktail employee Jeremy Thompson, New Orleans Daiquiri Season extends the celebration of the historic drink from two days to the entire month of September. This is traditionally one of the slowest times of year for the food and drink industry, Tueenerman said.

Beginning last year, Tueenerman, who founded Tales of the Cocktail in 2002, approached dozens of restaurants and bars located mostly downtown and invited them to participate, a process she said was exciting for the start of the season.

“It wasn’t bad. Everybody was enthusiastic and pretty responsive,” Tueenerman said.

Since the first of the month, establishments from the stop-and-go Big Easy Daiquiris on Bourbon Street to the sit-down Doris Metropolitan on Chartes Street have invited Daiquiri Season attendees to try their unique cocktails, ranging from traditional fruity mixes to imported liqueurs and other ingredients.

“Some places go for a contemporary taste, and others stay more traditional,” Tueenerman said. “It’s fun to see what they come up with.”

Beverages like the Pineapple Upside Cake Daiquiri from Big Easy Daiquiris and the Italian Cookie Daiquiri from Three Muses in the Marigny are among the many contemporary flavors available on participating menus.

Nick Evola is the manager at Bourreé at Boucherie, one of the few spots participating in the Uptown area. While Bourrée is primarily a Cajun meat market, Evola said they pride themselves on their craft drinks, and their specialty daiquiri, dubbed the “Blue Bayou.”

“We’ve had a lot of interest in the daiquiri,” Evola said. “I’ve had people specifically come in because they subscribe to Daiquiri Season. My general impression is that it’s helped out.”

With dozens of different bartenders and restaurant staff like Evola involved, one of the biggest aspects of Daiquiri Season is the competition to win the title of Duke and Duchess of the Daiquiri, a contest judged on the best daiquiri in two categories, frozen and non-frozen.

In total, 43 specialty Daiquiris were concocted and submitted for the competition at the beginning of the month. From there, six drinks made the final cut for both categories. Then, professional judges like New Orleans celebrity Big Freedia and Tueenerman crowned a winning Duke and Duchess. A fan favorite drink is also announced at the end of the month.

“People love that. Guests like being able to try the drinks, vote for a favorite, and see how they line up with the judges,” Tueenerman said. “And the bartenders like that spirit of competition.”

Sam Perez, a bartender at the Catahoula Hotel’s rooftop terrace bar, said before winning the crowning with their “Rum Cannonball,” business this month had been generally slow compared to when she started in May. However, within a day of the crowning, she said people began to reach out about their prize-winning drink.

“I’ve had people reaching out to me personally, calling, texting and contacting me on Facebook,” Perez said. “They’re like ‘hey, when are you working, when can we try the daiquiri?'”

Alex Gaston, marketing junior at Loyola, learned about New Orleans Daiquiri Season this week and is planning to try a specialty drink before the end of the month.

“I think it would be a cool way to try out different restaurants,” Gaston said. “There’s nothing better than drinking a nice cold daq on a Friday afternoon.”

Over two weeks remain before the first ever New Orleans Daiquiri Season is in the books. For a map of participating establishments and schedule of events, visit the official Tales of the Cocktail website.