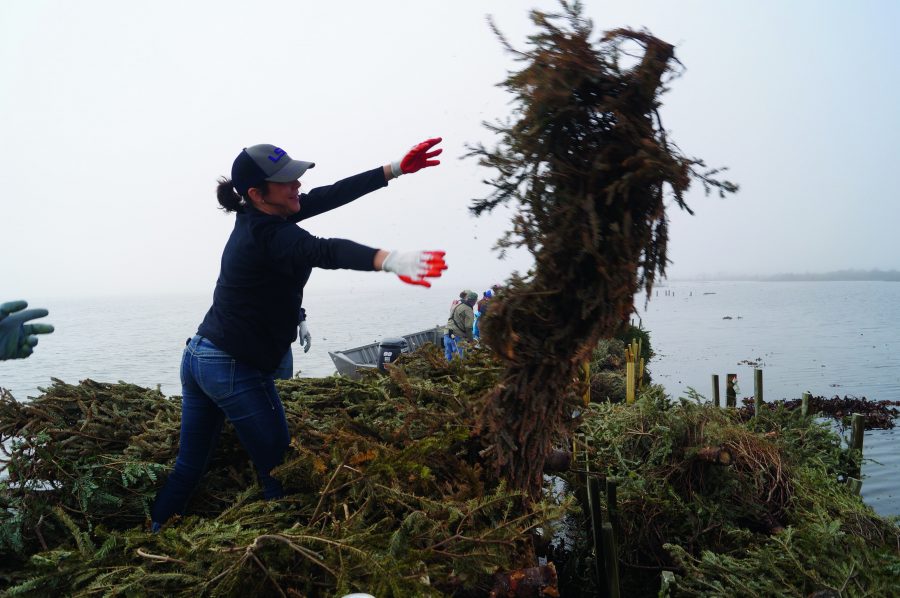 Stephanie Zimmerman, a volunteer with the coastal restoration project, throws a Christmas tree into a "crib" in the bayou Lafitte, Louisiana, on Jan. 14. The trees break the waves that cause erosion and trap sediment that rebuilds the land. Photo credit: Colleen Dulle

LAFITTE, Louisiana — Jason Montagino has seen coastal erosion displace his neighbors and hurt the fishing business in Lafitte, Louisiana, for as long as he can remember.

“The land means a lot. You don’t want to see it erode away,” Montagino said. “When the land erodes away, then the people don’t have a place to live.”

Louisiana’s coastline has lost an area the size of Delaware, about 1,900 square miles, since the 1930s, a rate of 1 football field’s worth of land every 38 minutes.

One state project, however, is not only stopping erosion but re-building the coast.

The Christmas Tree Marsh Restoration Project uses Christmas trees that parish residents leave curbside and builds them into barriers to break the waves caused by tides and boats, limiting how much the water erodes the land.

Tree-filled barriers are installed in the bayou 100 feet away from the coast, and sediment builds up in the calm water in between. From there, aquatic plants can grow, and the plants’ roots hold the sediment together, making it solid land.

Montagino estimated that he’s seen 3 to 5 feet of marshland be rebuilt along the Lafitte coastline in the last 26 years.

Bob Thomas, director of Loyola University’s Center for Environmental Communication, was one of the founders of the statewide project.

Thomas said the tree barriers have varying success rates, depending on how the water moves along the coast in different places.

“I’ve seen a lot of places where 20, 30, 40, 50, even a hundred feet have been built over time with the Christmas trees, and so there are a lot of small successes and a lot of really big ones,” Thomas said.

He said that in the areas where the project didn’t work at first, state teams have learned how to build the barriers in more effective ways.

Thomas added that the project has become more efficient: In most parishes, military helicopter pilots fulfill their required practice hours by volunteering to drop Christmas trees into the “cribs,” the plywood-and-wire boxes in the bayou that keep the trees from floating away.

In Jefferson Parish, though, volunteers still do some of the work by hand.

A group of about 40 volunteers gathered on a foggy morning, Jan. 14, at Cochiaras Marina in Lafitte, where they loaded fishing boats with trees that they threw into the cribs.

One of the groups braving the slick conditions and low visibility that day was the Organ Grinders, a female dance troupe from New Orleans.

Organ Grinders member and Loyola alumna Chelsey Richter, A’12, said she was struck by the progress she watched the volunteers make filling the 1,000 feet of cribs along Lafitte’s coast.

Jason Smith, the parish’s coastal programs coordinator, said that volunteers like Richter appreciate the hands-on work. Others just want their trees to be recycled.

“If those trees aren’t used for coastal erosion, you know, we will get calls,” Smith said.

Thomas said many people prefer that their tax dollars be used for coastal restoration, rather than for taking Christmas trees to the landfill.

For Montagino, who spent the morning driving his tree-filled pontoon boat to the cribs and back, it’s all about protecting the community.

“People do need to pay attention. It could be their coastline here,” Montagino said. “This is not just Louisiana’s coastline or Lafitte’s coastline. This is America’s coastline.”