Editorial: The Next Four Years 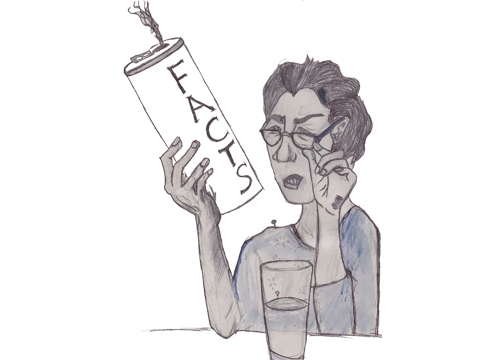 Here’s to the next four years. It will be the time when mass media, both the publications that provide news and the citizens who consume, like, comment and vote, will sink or swim.

In this time, private citizens and news organizations alike will need to look inward, to assess their routines and habits, the way that they interact with each other, the values they exercise and how they handle the information they receive with every glance at their phones.

The next four years will be a challenge for everyone who cares.

From the reporters who must learn to walk the tightrope of an unconventional president to the onlookers on Facebook who feel rectified as those reporters come under fire, people will need to start asking why and start looking more deeply at the other instead of running further into their rooted beliefs.

The next four years will not be easy, but looking back on the last two years, there’s no way they could be.

The last two years have unearthed too many issues that Americans never widely understood. People learned that disillusionment, unease and outright fear are more prominent in the country than anyone could imagine.

Of all the uncovered hazards of the last two years, the most important in entering the next four years is this: the sheer power of modern media.

Not a single person participating within the mass media – not the largest news syndicates in the world or any of the 58 percent of American adults, and growing, on Facebook – projected how impactful the dysfunction of the media would be.

Media experts have long understood the concept of echo-chambering, the selective interaction with information to reinforce one’s own beliefs. But until Election Day, as millions of Americans sat genuinely shocked while millions were equally certain, no experts could understand just how much information bubbles could change mass perception.

People, generally, have always been wary of information found on the Internet, while also understanding the partisan set up between the mainstream news organizations like Fox, MSNBC and CNN. But until the presidential election, when more pieces of fake news–stories that purposefully mislead, omit or falsify information–were engaged on Facebook than pieces of news from credited outlets, no one could realize just how severely the mainstream media had earned their distrust.

Until a gunman drove across state lines and held up a pizzeria with an assault rifle, because he believed it was the site where the democratic nominee for president of the United States was involved in an underground child sex ring, could people see the legitimate danger and ease in which misinformation is accepted.

Until the last two years, when the heat of election season and the alarm of the American people brought to light the increasing blur between empirical evidence, facts, beliefs and opinions, could people truly understand that the Age of Information also has the potential to threaten objective reality.

Looking at the last two years, no, change cannot be easy. But as the world spins into 2017, positively reforming these problems over the next four years should not be easy either.

According to the most recent Gallup poll, four in 10 Americans put trust in the mass media, a record low that shows continuing downward trends, especially in those younger than 50. The majority of Americans do not trust the media.

Rebuilding this trust requires that the members of the established media, from the Los Angeles Times to The Maroon, acknowledge that business-as-usual must change.

Media outlets are part of an industry and are composed of people. “The media,” for all of its growing, amorphous power, is comprised of individuals, professionals who each must examine their part in the development of the issues they now face.

Members of the traditional media must ask themselves when President Donald Trump calls CNN fake news, why do so many of his supporters adamantly agree? It is not just because they are misinformed.

In a constant battle of ratings, first-scoops and faux-objectivity, the media industry solidified Trump within the spotlight, treating coverage as a commodity. Then, almost simultaneously, they became overtly critical as his chances turned to legitimate possibility.

People, not just Trump supporters, notice these things. Distrust in the mainstream media increases, pushing consumption further towards unaccredited news sources and creating the idea that “fake news” is what comes from the news outlets following corporate interests as usual.

This effect is exacerbated, so, when BuzzFeed releases a dossier two weeks before the presidential inauguration of “explosive” information that is also “unverified,” enough doubt can be cast to render a potentially history-changing story useless.

In the next four years, news outlets must acknowledge their contributions to the increasingly frayed trust with the public and step up their game.

Unverified facts cannot be published. Every piece of hard news must be unassailable. If that means not being the first organization to publish a story, then so be it. If that means running pieces that do not cater to a target demographic’s views, good.

In the next four years, doubt from all sides will be cast upon the news media. If these organizations do not rise to the occasion, the very nature of factual reality will be put in jeopardy. If these organizations continue to respond to the president’s tactics with cattiness, an unprecedented administration will be without a watchdog.

The next four years will be hard, but the media must use this time to re-earn public trust. Only when news organizations improve can they wave away the insult of “fake news,” as they should.