Rugby team is hunting for victory this spring 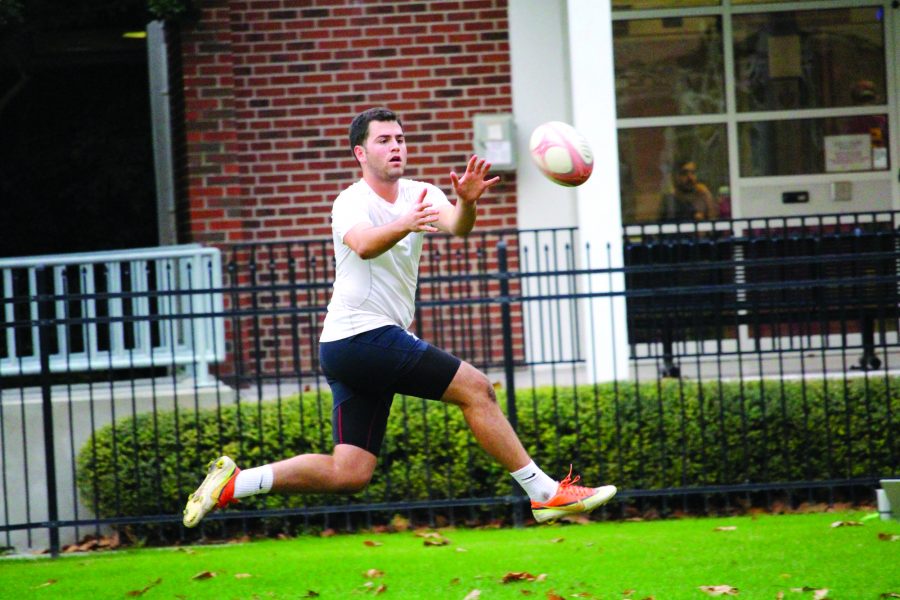 Lester Duhe, mass communication senior, receives a pass during practice on Jan. 11. The teams next game is on Feb. 4 against Tulane University. Photo credit: Marisabel Rodriguez

The rugby team is gearing up for a busy upcoming season after an impressive 4-1 record this fall.

Speed, agility and communication are just a few of the skills these young men push to improve on during practices.

Connor Delahunty, criminal justice senior and team captain, said while the team might not be ready yet, they have the foundation necessary for success in both 7’s and 15’s matches this season.

“We all just had a long break, so physically we’re not there yet, but mentally I think we’re all really prepared and excited for the next few games that we have coming up,” Delahunty said. “We’re still just trying to work out the kinks of being away from each other, but once we get our chemistry back and our fitness back I think we’ll be a really, really hard team to beat.”

Jerry Malina, head coach, said his team had potential for the upcoming games and tournaments.

“I think we have really good skills as a rugby team. Other coaches have told me that our guys pass and catch the ball with more skill than a lot of teams they’ve seen, and coming from a small school like Loyola, that’s a compliment,” Malina said. “So I work really hard on fundamentals, it’s all about moving the ball around and trying to attack where they’re not, and I think our guys are pretty good at that.”

“We have a lot of chemistry, as you can tell; guys joking around, playing with each other at practice and just kinda hanging out, you know? That’s what I think is really crucial for success on the field,” Duhe said.

The team hopes to build upon this camaraderie in preparation for their difficult matches this season, leading up to the second annual Jesuit Cup in Santa Clara, California from April 21-23.

Loyola’s rugby team will test their skills against Tulane University  in their second spring game on Feb. 4.