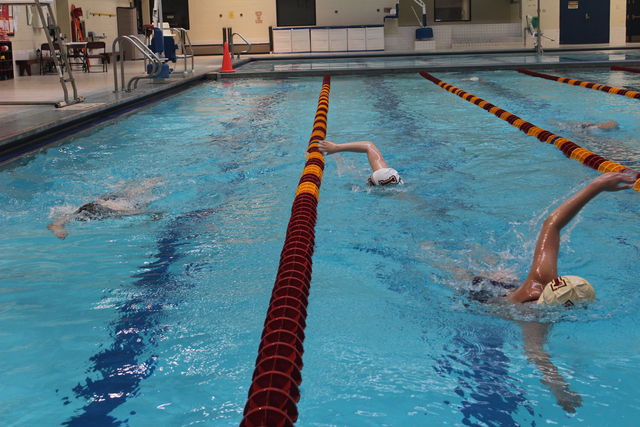 In their first year diving into the pool, the swim team is making a big splash in the pool nationally.

In their first year of existence, the swim team has had six swimmers, three men’s and women’s swimmers apiece, already qualify for the National Association of Intercollegiate Athletics National Swimming and Diving Championships.

Thomas Natal, head coach, believes that the grueling workouts the team goes through consistently has pushed them to success in their first year as a program.

One of the swimmers from the men’s team that has qualified for nationals is economics freshman Warren Massimini.

He believes that though the workouts have been difficult and harder than any he’s done before, they have paid off, and he is seeing the reward for the hard work.

General studies freshman Paige Carter, one of the three women’s swimmers to qualify for nationals, wasn’t sure what to expect when she arrived on campus but is pleased with the decision she made to join Loyola’s swim program.

“I didn’t really have any expectations when joining, just knowing this was a first year team really made me excited about being the first generation of a team. With having success involved, I knew I chose the right school and coach for me,” Carter said.

Carter believes that the success of the team is a big deal due to their youth and relative inexperience swimming at the collegiate level.

“Other teams that have had experience before and we are on our first year and already have half of our team qualify for nationals; that’s huge,” Carter said.

The team’s strong bond, particularly in the freshman class, can also be attributed to their success in the program’s inaugural season.

“We all bonded pretty much immediately at orientation. We are all going through the same stuff at the same time so we have a connection,” Massimini said.

What Natal is most proud of with his team, though, is their involvement on campus and commitment to excellence in the classroom and in the pool.

“We had five of the swimmers with a 3.5 GPA and above, two of them are pre-med majors, so they are doing great things. They are involved in other aspects. It’s not just about being an athlete but being a student, being a part of the school and being a part of the community, as well,” Natal said.

With all of the early success for the swim team, Carter believes the team will be one of the elite NAIA programs going forward.

“I think that our team is going to be in the top five for NAIA all around. Right now we are so small, but everyone knows about us because we are so well rounded,” Carter said.

Due to the early success and winning, Carter believes the team has high potential, and their competitive spirit will drive their success as they move forward as a program.

“We are setting high standards, and the legacy will go on forever,” Carter said.