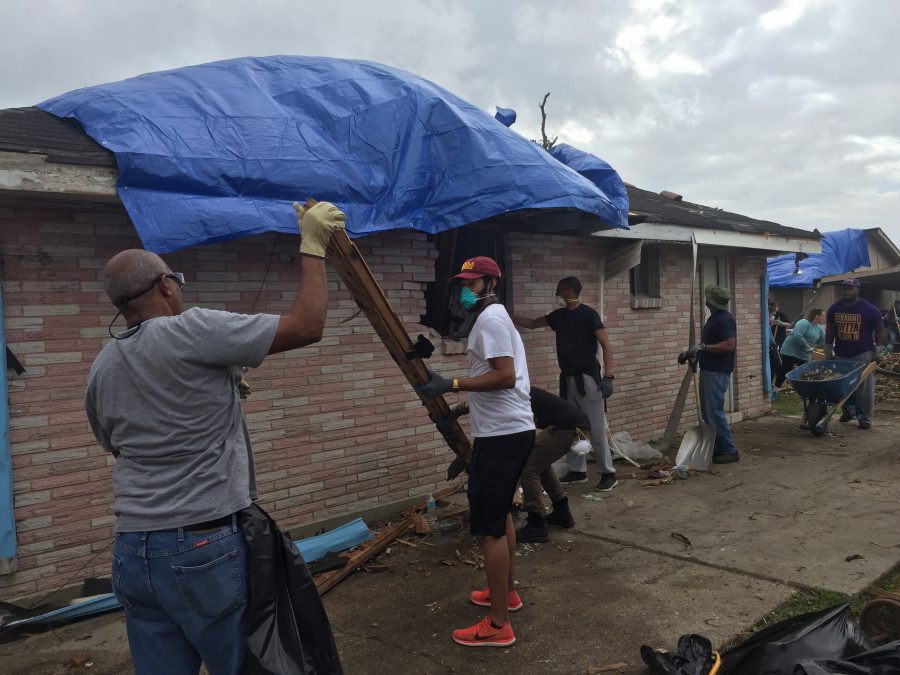 After seeing their community ripped apart by an EF-3 tornado, the New Orleans alumni chapter of Alpha Phi Alpha Fraternity knew they had to help with the relief efforts.

Allen Moret, management junior and director of educational activities for Alpha Phi Alpha’s Loyola chapter, reached out for volunteers after hearing of the event.

“Our alumni chapter organized it first, so I just reached out to Loyola and asked for volunteers for Saturday’s relief effort,” Moret said. “We called for a prayer on Thursday during the window just to spread awareness about what happened and to pray for the people who were affected by the tornado.”

The volunteers were divided and sent to five different locations within the community that needed the most hands. Lisa Mims, who has lived in New Orleans East for 17 years, owned one of these homes.

“I didn’t expect it to be like this because my neighbor said it was only my roof that was a little damaged, but when I came home, I was like, ‘oh, she is confused.’ It was really damaged, not a little damaged,” Mims said.

When Mims came home from work in Metairie that day, the roof on one side of her house was missing and debris from her neighbor’s house had lodged into her bedroom.

“All of my windows were blown out, so I have no windows. All of the stuff that was out in the yard was in the house. My neighbor’s fence was in my window. I had everyone’s junk inside my house,” Mims said.

Her next-door neighbor, John O’Rourke, was also hit badly. One wall of his house had completely collapsed. Rain and debris flew inside his house which meant that the carpets had to be ripped out.

“I couldn’t believe it. I saw the whole neighborhood; it was so bad. The fear factor of getting hurt, and after losing stuff, your home and all, is a devastating thing to think about, and it weighs heavy on you,” O’Rourke said.

Despite the overwhelming amount of work to be done, O’Rourke was grateful for the help from Alpha Phi Alpha and their volunteers.

“I never knew it was going to turn out to be such a great day with all the help. This yard looked like some of the others, but now it’s decent enough, I’ve got a starting point now,” O’Rourke said.

Approximately 30 Loyola students and members of different greek organizations on campus came to lend a helping hand. In total, 150 volunteers gathered to help pick up debris and clear yards in the affected area.

Ellie Diaz, Student Government Association president and political science senior, who was among the volunteers said she was proud of everyone coming out to help.

“Seeing so many other groups out volunteering made me realize that even in the most devastating times we all rebuild as one. I would recommend all students to serve their community while they can here at Loyola and in New Orleans,” Diaz said.

In a statement released by the university, Kurt Bindewald, the director of University Ministry, said, “Though our natural inclination is to rush in immediately to help, our experience has taught us to be careful and intentional in our response as first responders and professional relief organizations assess damages and needs.”

Donations of nonperishable items, toiletries and cleaning supplies are being accepted outside the Mission and Ministry office in Bobet 104.

This event is one of many Loyola-organized events to help with the relief effort. Loyola University Community Action Program plans to go to New Orleans East on Saturday, Feb. 18 through the St. Bernard Project.

If you would like to contribute to Alpha Phi Alpha’s relief effort, visit www.gofundme.com/nola-alphas-impact-tornado-fund. Funds raised will be distributed to families who lost their homes in the tornado.