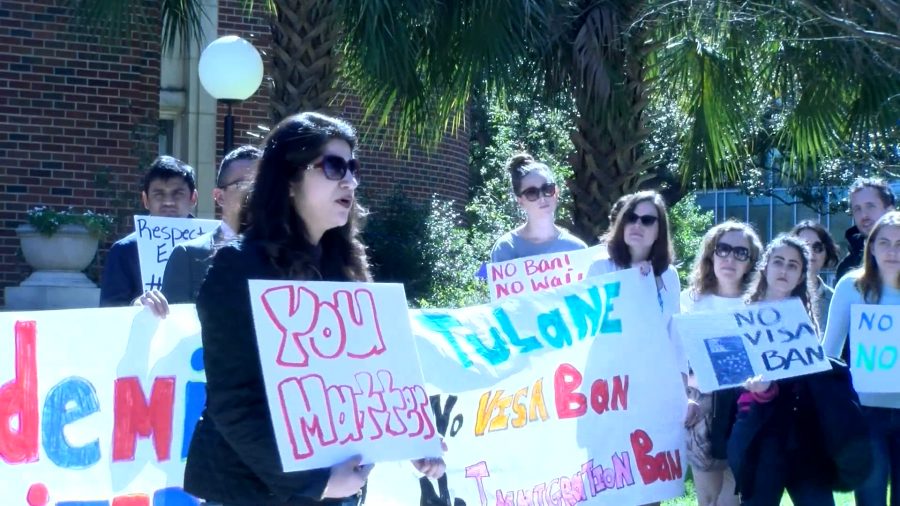 Students, faculty and staff denounce President Trump's executive order travel ban at an Academics United demonstration at Tulane University. An immigrant from Pakistan spoke to demonstrators about issues she faces as an immigrant in the U.S. Photo credit: Alliciyia George

Tulane joined college and university campuses nationwide with a peaceful demonstration at McAlister Hall, protesting against the president’s ban on Iran, Iraq, Libya, Somalia, Sudan, Yemen and Syria to show support and solidarity with those affected by the recent executive orders on immigration.

Many international students, scholars and staff could be affected by President’s Trump’s targeted immigration ban. Although the ban has been temporarily blocked by the federal courts, it may be reinstated, and other federal immigration actions may be rolled out affecting more members of the Tulane community.

Dozens of students at Tulane joined in a protest against President Trump’s immigration ban.

Protesters chanted “silence is violence” and “Together united we will never be divided,” among others during the protested called “Academics United.”

Many immigrants shared their perspective on being immigrant while working or studying at Tulane.

“We stand with our international community at Tulane, and we want them to know that we support them and love them and their welcome here,” said Kristy Magner, director of the Office of International Students and Scholars, an organizer of the demonstration said.

Demonstrators wrote messages to the international community. The ban affects 24 Tulane students and faculty. Some of the positive messages from the protest are now on display in the Office of International Students and Scholars at 6901 Willow St.

The office is working with other offices and individuals at Tulane on future opportunities to come together in person as a community around these topics, including a teach-in according to the Academics United Facebook event page.

Fifty-three colleges and universities participated in Academics United, including LSU. Should the challenge to President Trump’s executive order be overturned, the demographics at institutions of higher learning in the U.S. would shift. There were tens of thousands of students from the seven countries named in the executive order attend college in the US, according to a report from Business Insider obtained by College Factual, a higher education data analytics company.

“It was especially important to me because my best friend back at home is a first generation American, and she immigrated here from Pakistan at age 12. Her family is Muslim. She is a US citizen now, but her dad is not,” Guy said.

Even though Pakistan is not one of the countries named in the executive order, Guy said her friend’s father still has trouble entering and exiting the U.S.