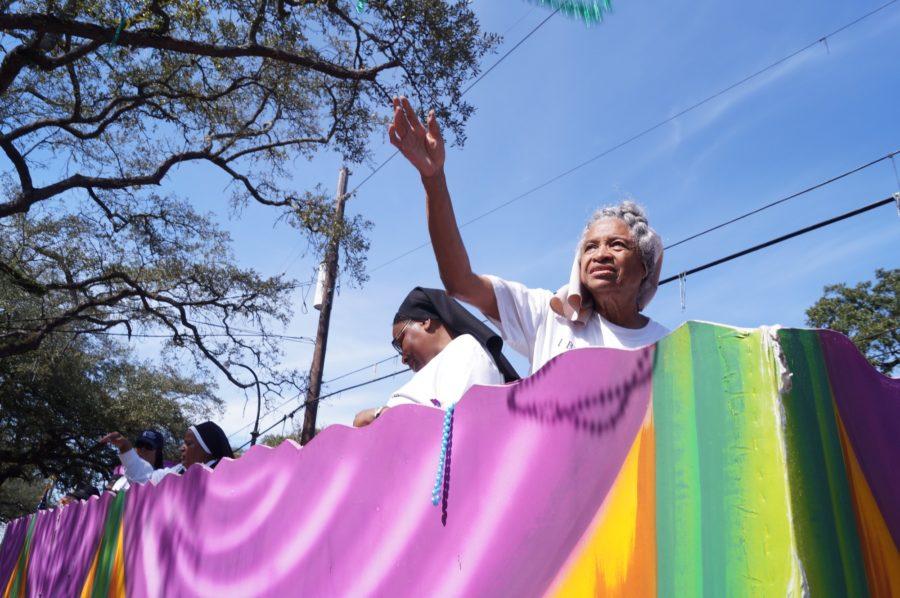 The Sisters of the Holy Family ride on their anniversary float in the Mystic Krewe of Femme Fatale on Feb. 19. Photo credit: Colleen Dulle

The Sisters of the Holy Family are celebrating the 175th anniversary of their founding in New Orleans at the biggest party in town: Mardi Gras.

“Well, I always thought that you can’t have a celebration in New Orleans without a parade,” said Sister Greta Jupiter, congregational leader for the Sisters of the Holy Family.

According to a press release from the Archdiocese of New Orleans, the 20 sisters who rode in the Mystic Krewe of Femme Fatale are the first group of religious sisters ever to ride on a float in a Carnival parade.

The krewe invited the sisters as honorary guests and gave them customized throws: beads with the congregation’s logo on the front and Femme Fatale’s on the back. 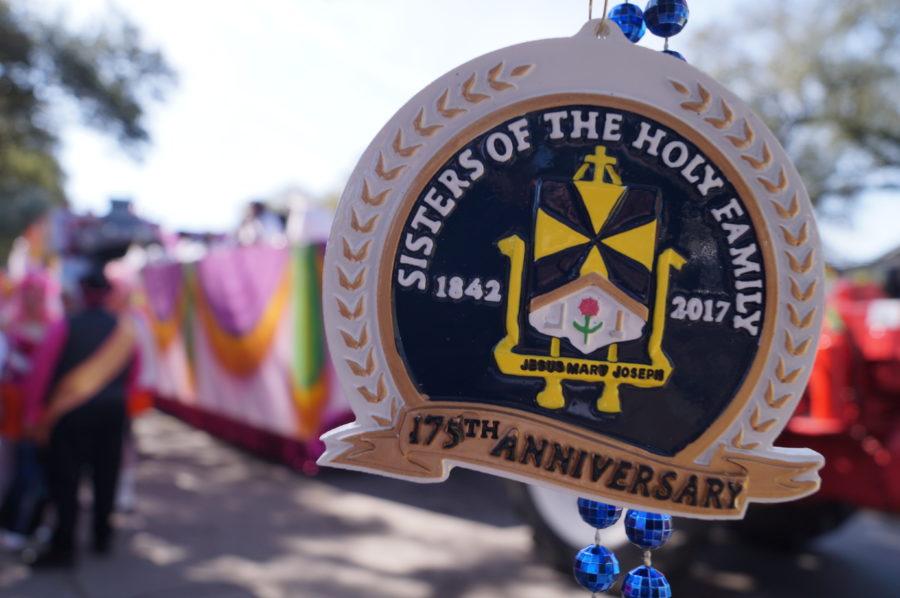 “We’re excited,” Jupiter said as the nuns waited for their charter van to take them to the parade route from the Krewe’s staging area at the Hyatt Regency. “We want to spread the word that we’ve been here for 175 years. We’re the Sisters of the Holy Family. We service the City of New Orleans through education, healthcare, taking care of the elderly, the sick and working in the parishes.”

Their impact in the community was evident as people along the parade route called out to the sisters by name or simply shouted “Thank you, sisters!” even before catching beads.

“We just felt so appreciated by the crowd,” Jupiter said.

The sisters also took the opportunity to spread the word about Venerable Mother Henriette DeLille, the free woman of color who founded their order here in 1842.

They took to the parade route in T-shirts with DeLille’s name and face on them, along with her motto: “I believe in God.”

“We wanted to make sure that we would wear our Venerable Henriette DeLille T-shirts so that people would say, ‘Well, who is she?’ So that maybe somebody in the group would say, ‘She’s the foundress of the Sisters of the Holy Family,” Jupiter said.

Jupiter explained that DeLille is currently on the path to being named a saint by the Catholic church. Right now, DeLille is “venerable,” which recognizes her as having lived a “heroic and virtuous” life. A second possible miracle is being investigated by the Vatican. If verified, DeLille would become “blessed” and would need one more miracle attributed to her to become a saint.

“She was such a wonderful woman, and she founded this community at a time when it was unheard of for a woman of color to be religious,” Jupiter said.

Ansel Augustine, director of the archdiocese’s Office of Black Catholic Ministries, said that if DeLille is canonized, she would be the world’s first African-American saint.

According to Augustine, the sisters have continued DeLille’s work in New Orleans and expanded it around the world.

“But it all began here in New Orleans, and I think that’s a testament to our faith as a Catholic faith, black Catholics as well, our African-American traditions, as well, so the spirit lives on, and the spirit of Mother Henriette DeLille lives on and will be shown in the joy they have on that route,” Augustine said as the parade began rolling.