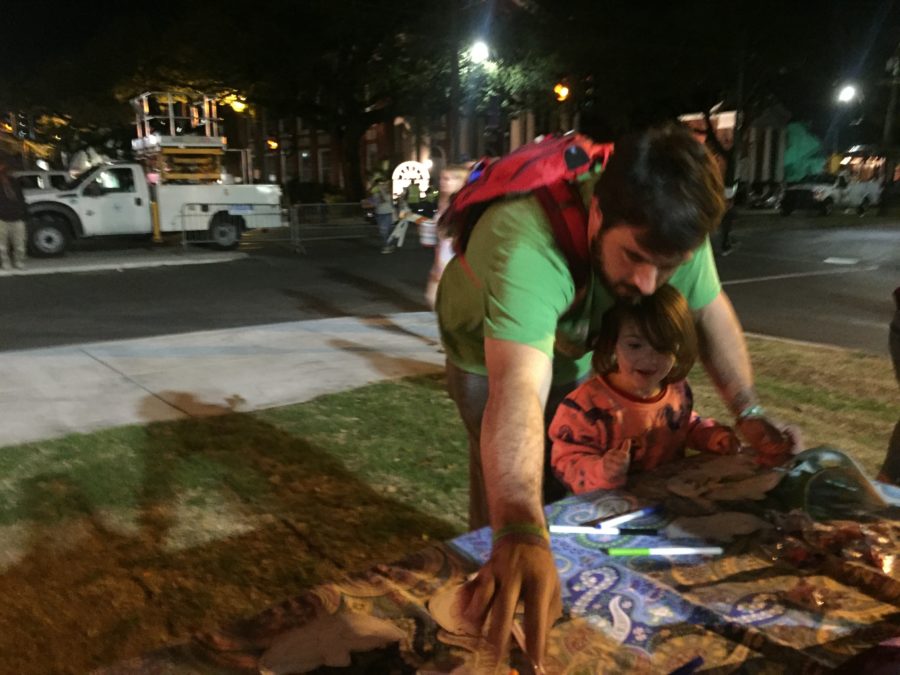 Dwayne and Mia stop by the relaxation station and pledge to "unmask the stigma." The relaxation station was set up by the Loyola Bateman team as a place for parade-goers to escape the crowds with noise-canceling headphones, free water and information about mental health. Photo credit: Jessica Molina

Loyola’s Bateman team is on a mission to “unmask the stigma” surrounding mental health in the New Orleans community.

Across the country, schools with a Public Relations Student Society of America chapter and Bateman team are working with the client  The Campaign to Change Direction — a national mental health initiative.

Their campaign theme is Unmask the Stigma which Ciarra de Leon, mass communication senior and Bateman team member, has been working on since October.

“We want people to realize that while 1 in 5 people are diagnosed with a mental illness, we all have our own mental health to take care of and it shouldn’t be something we are afraid to talk about,” de
Leon said.

With various events on and off campus, such as the Carnival of Self Care during the Student Government Association’s Countdown to Carnival event, the team is helping students to become more familiar with the five signs of emotional distress.

Campaign to Change Direction has identified five signs that may indicate someone is emotionally suffering — personality change, agitation, withdrawal, poor self-care
and hopelessness.

These signs are not diagnoses, but if you notice them in someone you may want to reach out and offer support. They may manifest as something more serious if they aren’t talked about, de Leon said.

This campaign is a chance for the Bateman team to work outside of the classroom.

“I am getting really valuable experience as to what running a real public relations campaign would be for a client. We are constantly contacting media, medical professionals and other prominent local figures to help spread our message and make sure we are doing it in the right way,” de Leon said.

Gabrielle Johnson, mass communication senior, hopes that their team wins the competition this year and can serve as an example for future Bateman teams.

“It’s one thing to hear professionals talk about how PR is a 24/7 job, but it’s another thing to live and experience it,” Johnson said. “Overall, I would say it’s a valuable experience and is preparing me for the career I want to pursue.”

At each event, the team has an option for participants to pledge to  “end the stigma” by talking about mental health.

Those who sign the pledge receive a business card with the five signs, local hotline numbers to call for help and information for Campaign to Change Direction and Give An Hour.

Give an Hour is a service that provides people with therapists who donate a free hour of their time to help those in need.

“We also hope that through our events and social media we make talking about mental health a more comfortable thing for people to do. We want to show that people in our community are supportive of mental health, not trying to hide it or push it under the rug,” de Leon said.

On March 14, Bateman is hosting a “Dinner En Mask” party in the Peace Quad.

Alfred Banks, Loyola alumnus and local rapper, will be at the “Dinner En Mask” event to perform.

De Leon said that Banks gives valuable insight to the team on the project as his brother took his own life after being diagnosed as schizophrenic. He not only is helping Bateman spread their campaign’s message, but his album release on March 19 is largely inspired by
his brother.

De Leon said that she is excited to see the changes in the Loyola community after the event.

“The campaign will end on March 15, but we hope it will have a lasting effect on the community far after that,” de Leon said.