The patron saints go marching in 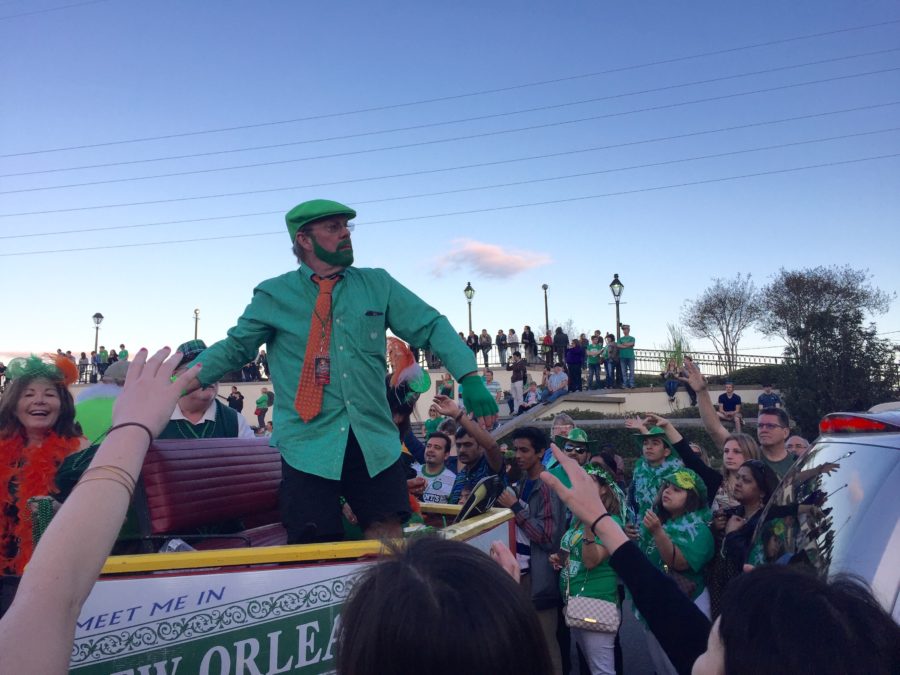 A rider throws beads from a float to crowds near Jackson Square in the French Quarter at the St. Patrick's Day parade March 17. Photo credit: Erin Snodgrass

Block parties and parades rolling in different areas of the city honored the patron saint of Ireland over two weekends.

On Friday, March 17, the St. Patrick’s Day Club held a block party in the Irish Channel featuring Irish music, food, drinks and dancers. Later that evening, Molly’s at the Market and Jim Monaghan’s Parade rolled through the French Quarter.

Daniel Nisthal, psychology freshman, and Izabella Montagne, sociology freshman, made their way to the Quarter on Friday night to watch the parade and see how New Orleans celebrates St. Patrick’s Day.

“I wanted to go to some of the parades the week before and wasn’t able to make it, so I jumped at the opportunity to see St. Patrick’s Day in the heart of New Orleans,” Montagne said.

“Celebrating in New Orleans was way more fun. I got to actually see some Irish traditions instead of just researching them,” Nisthal said.

“My favorite parts of the parade were definitely the creative floats and the beads I caught,” Nisthal added.

The next day, March 18, the Italian American Marching Club held their St. Joseph’s Day Parade in the French Quarter, along Chartres, Bourbon and Royal streets. The event serves as a heritage march for Italian immigrants and their descendants on St. Joseph’s Day, a Catholic holiday which celebrates Italy’s patron saint, Joseph.

Jimmy Guardiola, music education junior, has spent the last three years marching in the parade, after a friend from high school invited him to join the club.

“The best part is being with my friends, dancing and having fun with the crowd, getting the audience engaged, handing out beads to all the lovely ladies and giving them a kiss on the cheek. It’s a lot of fun for all,” Guardiola said.

Marchers wear tuxedos and attend a formal ball at the Hilton after the parade is over. Guardiola, who is of Italian heritage, enjoyed the combination of sophistication and partying found at the St. Joseph’s Day celebrations.

“St. Joseph’s is important to me because it’s that lesser known celebration. Everyone goes crazy for St. Patrick’s Day, which is admittedly a lot of fun. However, it’s nice to see that we Italians can go as hard as the Irish, if not harder,” Guardiola said.