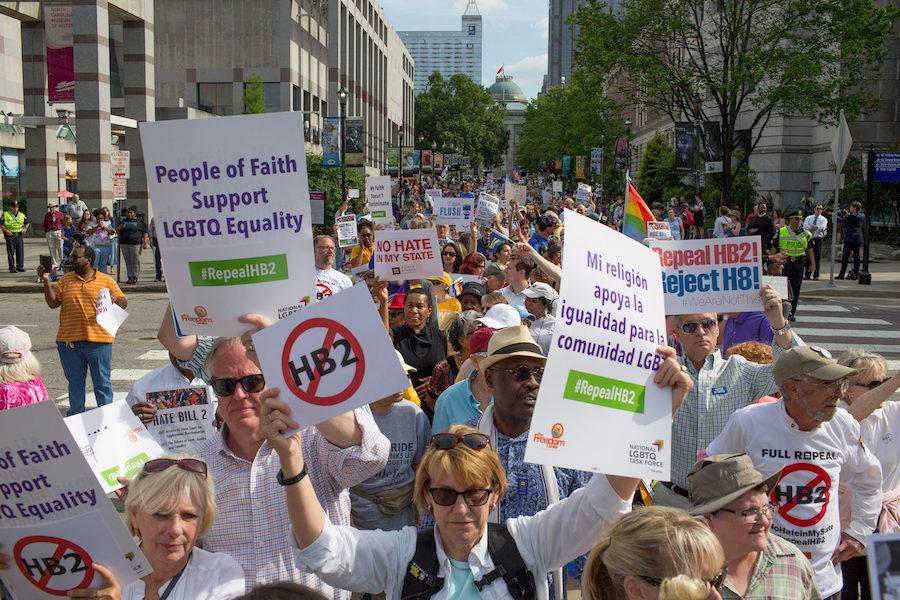 Demonstrators call for the repeal of HB2 in Raleigh, N.C., on April 25, 2016. The state marks the first anniversary the bill, widely criticized as anti-LGBT, which has cost North Carolinians jobs, money, performances and events, including this monthâ€™s NCAA basketball tournament. (Jill Knight/Raleigh News & Observer/TNS)

When it comes to the widely contested transgender issue, Loyola, an institution priding itself on diversity, inclusiveness and acceptance, is putting its money where its mouth is and working toward accommodation and protection for its transgender students.

Over the last year, Loyola has made several small, yet significant changes in its operations, from an increase in gender neutral restrooms around campus to working case-by-case in offering the best housing situations for transgender students.

Through the Office of Student Involvement, Krewe Leaders and health advocates undergo intensive “Q Advocate” training, which educates on long and short term strategies to be a resource for the
LGBT community.

Through the Office of Student Records, transgender students also have the ability to report their preferred names into Loyola’s records so faculty and staff can be conscious of those in transition.

Loyola is not the first university to offer such resources, but with many schools that have yet to adopt these positive changes, it is clear that the Jesuit value of Cura personalis is being both practiced and preached.

As an institution, these are the beginning steps toward inclusivity and destigmitization of the LGBT community, a goal that can only be achieved when the issue is on
the table.

As a student body, however, Loyola does little to match this effort.

Instead, the Loyola community mirrors the rest of the country in its treatment of transgender men and women: an unfortunate majority of people seeking to ignore rather than to understand.

Gender fluidity and the gender spectrum are concepts that few people want to talk about and even fewer want to think about.

Like with the rest of the country, those at Loyola who are educated and receptive of these concepts know who they are.

Generally, however, for the majority of people, thinking about the idea that a gender binary might not be accurate — the most basic historical, cultural, social concept of “one man, one woman” — is more than they care to handle.

The reality of the gender spectrum challenges peoples’ entire understanding of the world. This challenge, as history has shown time and time again, has led to the commonplace deaths of those who fall under the LGBT umbrella, both in extremely conservative countries and the United States alike.

As the U.S. continues to warm to the “L,” “G” and “B” parts of the community, who at least conform to the sex-gender binary, the “T” has yet to receive such consolation.

The American Psychiatric Association declassified homosexuality as a mental disorder in 1973; “gender identity disorder,” today known as Gender Dysphoria, was declassified in 2012.

Regardless of philosophical or religious beliefs, the fact is that the latest, widely corroborated study found that 41 percent of transgender and gender nonconforming people attempt suicide in the United States — two out of every five.

Analyzing this and similar studies, experts have tracked the effects of discrimination on transgender people. From being rejected by their family or community to homelessness and poverty, the more discriminatory factors a transgender person faces, the higher chance of suicide.

However, when transgender and gender nonconforming children and teens are supported rather than pushed away, the likelihood of suicide plummets.

Transgender people are discriminated against for the way they are born, misguidedly told that they are mentally ill, told they need institutionalization or are ignored
all together.

Not only do these citizens receive almost no protection under the law from discrimination, when they are simply ignored as an alternative to hated, their very existence is invalidated.

At best, transgender people benefit from the cultural shift that has allowed for the rest of the LGBT community to strive toward equality in this country. This shift in public acceptance is what has led to the increasing number of transgender people coming out at early ages.

This is not fake. Transgender people are not simply confused or “riding a trend.” This is a comprehensive understanding of human neuropsychology, built on thousands of years of scientific discovery.

There is an overwhelming consensus in the medical community that gender identity is most often established during early childhood, by age four or five. When this is not the case, it happens during adolescence, when sexual identity is formed as well.

More often than many would care to realize, these identities are not congruent with the acceptable male-female status-quo.

Gender is a spectrum, full of different identities than the manly man and feminine woman. Working to destigmatize this concept will be a multi-generational effort, and Loyola’s actions to accommodate transgender people — students at risk simply because they fell on this spectrum a certain way — are integral in laying the foundations
for change.

What’s more, though, is that the Loyola community opens its eyes to our fellow humans.

Transgender men and women are pioneers battling on all fronts, and they do not deserve the hate or invisibility they experience — espeically from good people who are too caught up in their own perspective to live empathetically.

These are people. These are neighbors and classmates and co-workers who will already struggle with more hate than anyone deserves in a lifetime.

As Loyola-educated adults, we cannot allow ourselves to fuel this cycle.