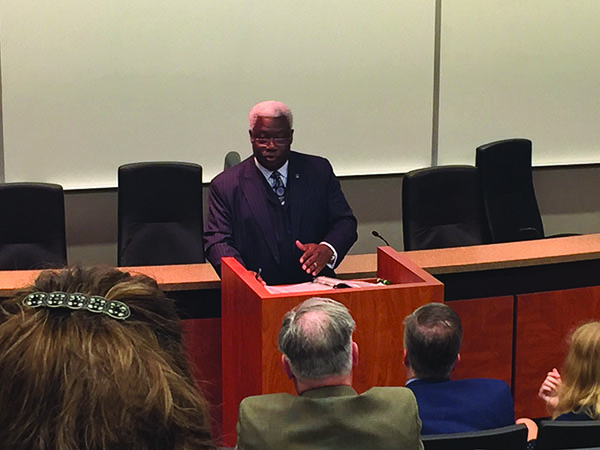 Loyola’s College of Law invited Carl Stewart, chief judge of the United States Fifth Circuit Court of Appeals, as the distinguished speaker for their annual lecture series that commemorates the life and accomplishments of the late Robert A. Ainsworth Jr.

Stewart led the discussion of Ainsworth’s life, speaking to the judge’s commitment to objective truth as well as his long-standing impact in the federal legislature. Stewart graduated from Dillard University in 1974 and the Loyola College of Law in 1974.

President Bill Clinton appointed Stewart to the United States Fifth Circuit Court of Appeals in 1994, and in 2012 Stewart became the chief judge on the Fifth Circuit.

“I did not have the privilege of knowing Ainsworth, but I’m honored to have known his influence and his work,” Stewart said.

Stewart chronicled Ainsworth’s rise from graduating Loyola’s law school in 1932 to his work in Louisiana’s State Senate, to serving on the United States Fifth Circuit Court of Appeals up until his death in 1981. Ainsworth was nominated by President Lyndon Johnson for his last position.

“Ainsworth was a state senator who rejected blatant segregation bills and was a fair senator who kept the fifth circuit balanced,” Stewart said. “He was a man dedicated through and through to judicious efficiency.”

Transitioning the retrospective, Stewart discussed Ainsworth’s achievements in upholding diversity jurisdiction, a form of subject-matter jurisdiction where diversity of citizenship in cases is dealt with on a federal level, rather than dealing with the potential bias from state senators.

“In 1974, Ainsworth wrote Mas v. Perry, which became a landmark case in diversity jurisdiction,” Stewart said.”He possessed the range of experience and outlook to keep himself fair and just.”

Stewart discussed that while the Founding Fathers saw diversity jurisdiction as a necessary civil procedure to negate bias in the state legislature, the subject matter of the operation has been controversial in centuries since and has been severely contested.

“This kind of jurisdiction legislation has changed much since 1789, in addressing corporations instead of the original person versus person legislature,” Stewart said. “Our Founding Fathers couldn’t have anticipated that these cases today make up 32 percent of the federal docket.”

In his career, Ainsworth wrote 19 opinions and resided on the court for 67 cases. In 1986, he received the Herbert Holly Award for his accomplishments in judicial oversight.

Stewart finished his memorial speech by highlighting Ainsworth’s commitment to justice throughout his career.