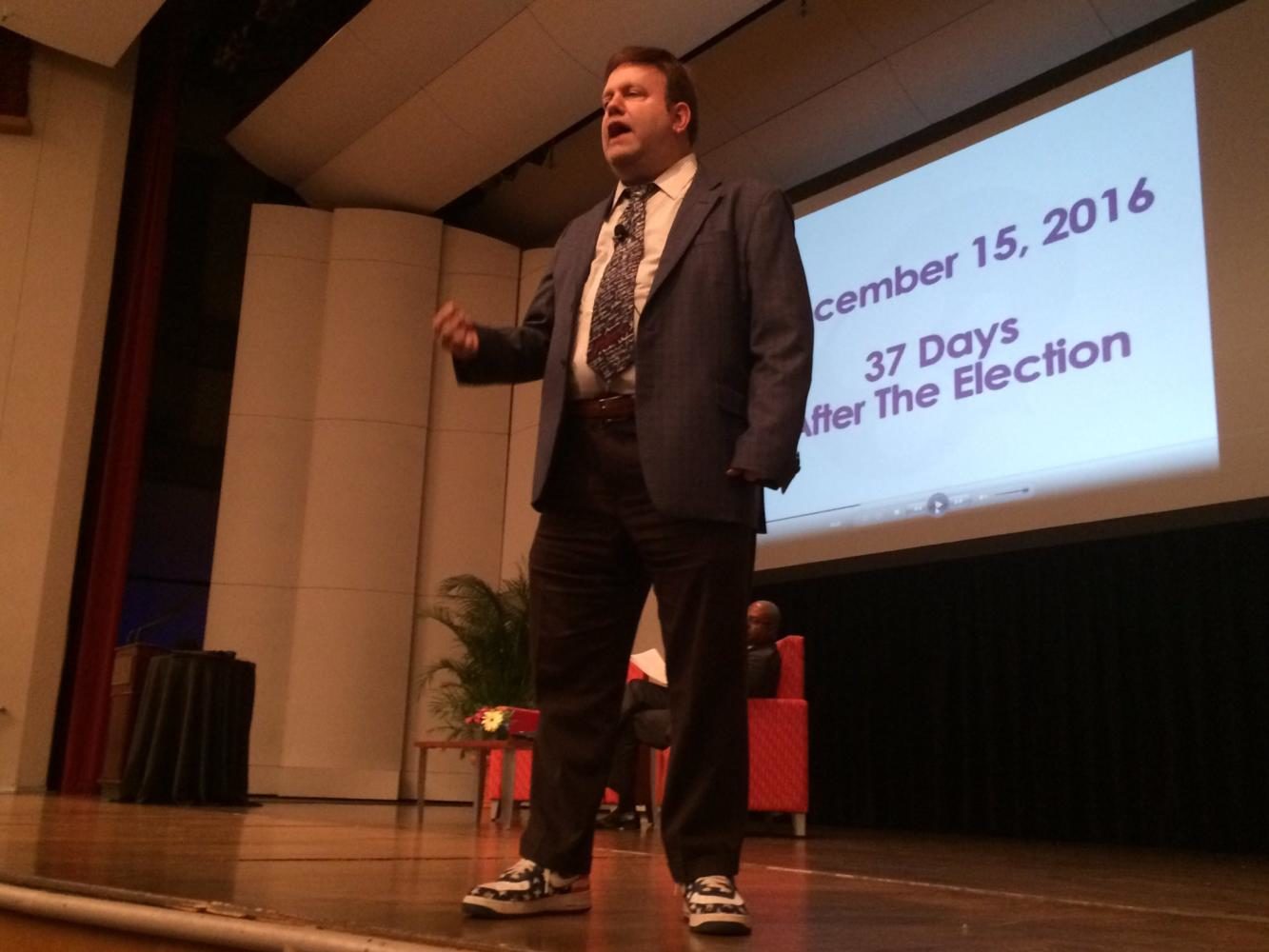 As President Donald Trump approached his well-publicized 100th day in office, Frank Luntz spoke at Loyola on issues the country faces with Trump as president and the difficulties in predicting his victory.

The lecture, which was held in Roussel Hall on April 27, was the eighth installment in the Ed Renwick Lecture Series, an annual event held at Loyola that features prominent political speakers. The event is named in honor of Ed Renwick, a former Loyola political science professor and political pundit, and in the past the event has hosted speakers such as political commentator James Carville, New York Times executive editor Dean Baquet and former Louisiana governor Edwin Edwards.

This year’s edition featured Luntz, famous for his organizing and analysis of political focus groups. Luntz currently serves as “Focus Group Czar” at Fox News and has had work published in The New York Times, The Washington Post and The Los Angeles Times, among others.

Luntz took little time to show his distaste for Trump, throwing jabs at the president like: “All three of Donald Trump’s wives are immigrants, which proves there are some jobs only immigrants will do” and “Stevie Wonder reads a teleprompter better than Donald Trump.”

Despite his personal dislike of the president, Luntz feels that Trump voters are justified in their distrust of the media and the political establishment. During the lecture, Luntz showed a series of clips from election night that showed members of the cable news media in distress as it became clear Trump was going to win the election.

“This justifies the hate they have toward the media. You tell me if this is unbiased,” Luntz said after showing the video.

This became a theme, as much of the lecture was spent criticizing the press for their handling of the election.

“The press got it completely wrong,” Luntz said. “My issue is more with The New York Times editorial page. Is everything that Trump is trying to do… is everything wrong?”

“This is the worst year for political discourse since 1968,” Luntz said. “If you ask teachers, this year is the year that kids will be the most offensive to each other, because they picked it up from the debates.”

Luntz then showed clips of him losing control over a focus group, as anger seemed to dominate the feelings on both sides of the aisle.

Failure to tap into this anger is what caused Hillary Clinton to lose, according to Luntz.

“[Hillary Clinton] is so insular that other Democrats can’t reach her,” Luntz said. “I hate identity politics. I hated Hillary Clinton’s speech at the convention. She is a role model, but I’d never vote for her.”

Luntz stated that this anger has continued to fester after the election, as congressional town halls, which previously only attracted around 75 people are now normally attracting 1000, of which Luntz says “800 are there to disrupt.”

With members of congress now being drowned out by protesters, as was the case in this February town hall by Utah Republican congressman Jason Chaffetz, Luntz states that those going for real answers instead return home with anger—anger at the protestors—in what Luntz feels is a dangerous cycle.

“I’m afraid this is the election cycle that kills a democracy,” Luntz said.