Quidditch team rebuilds for the year 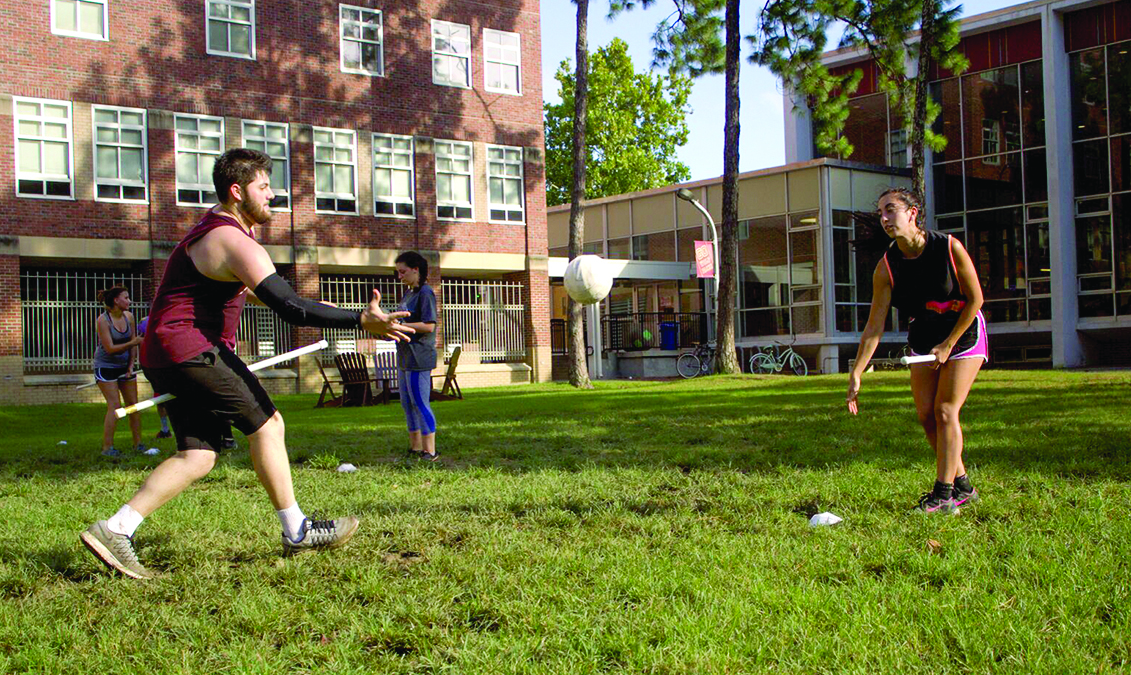 The quidditch team hopes to build and establish a stronge team for its upcoming season, as it hopes for a boost in number, and talent, thanks to a large incoming freshmen class.

Inspired by the fictional sport in the Harry Potter book series, quidditch is a co-ed full contact sport where two teams of seven try to win the game by getting the most points by scoring goals with specific balls all while riding on broomsticks (made of PVC pipe) like the characters in the series.

“I think this is kind of a rebuilding season because of the upcoming freshmen,” Griffin Parr, one of the team’s chasers, said.

There are four positions on the team: three chasers, who are responsible for passing the quaffle, which is a volleyball used for scoring goals; two beaters, who throw and block bludgers, which are three dodgeballs per team that can tag players out; one keeper, who is a goalie; and the seeker, who tries to grab the golden snitch, a tennis ball in a yellow sock on the snitch catcher. The snitch catcher is a neutral player who runs around trying to avoid getting the golden snitch taken from them.

“Quidditch is like a mix of rugby, lacrosse and dodgeball,” Parr said.

According to Parr, the team has three main goals for the year. The first is to have a complete roster of 21 players, so that they can compete with a variety of teams from places like Texas, Florida and South Carolina in a tournament called the Wolf Pack Classic on Nov. 4.

The team also aims for the large incoming freshman class to be a recruitment advantage, hoping to grab anyone who might have had an athletic background in high school that’s looking for an outlet in college.

Finally, the team hopes to create a welcoming environment for all of its players. The team captain and one of its beaters, Alex Pucciarelli, said because quidditch is co-ed, it allows for more diversity.

“If you’re on the fence, just come to our practices,” Pucciarelli said.

The quidditch team meets for practice every Monday and Wednesday on the Residential Quad from 4 p.m.-6 p.m. and on Sundays at 2 p.m.

“It might turn people away at first, but it really is welcoming if you just want to try out a sport,” Parr said.