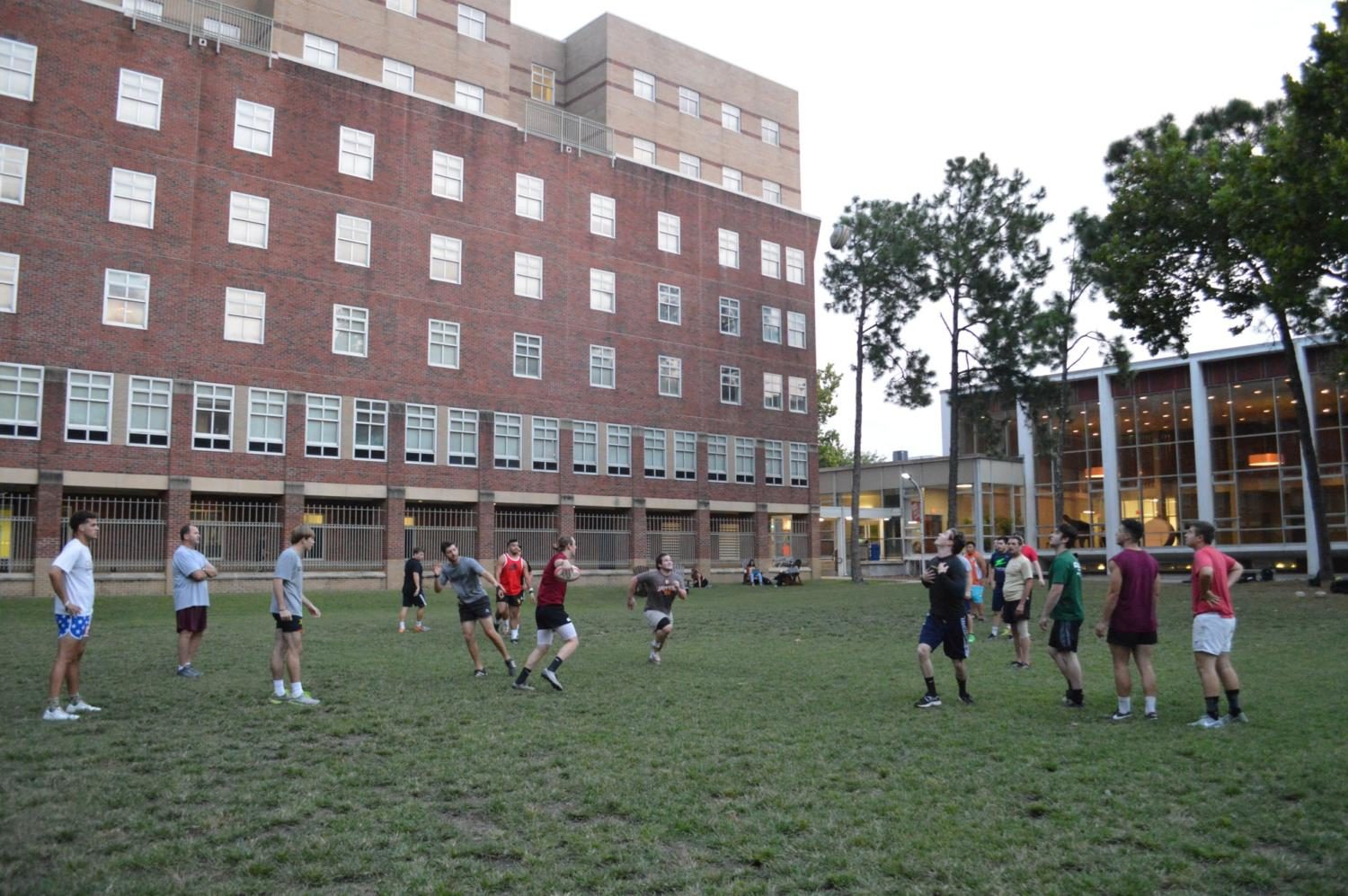 The rugby team practice in the Residential Quad on Wednesday, Sept. 6. The team is preparing for the start of the season with a new group of freshmen on the team. Photo credit: Paola Amezquita

After losing seven seniors from the competitive squad a year ago, the rugby team’s battle-tested veterans have begun to take on more duties than the typical player.

Vincent Duhé, history senior and co-captain, has taken it upon himself to mentor prospective newcomers who have shown an interest in joining the rugby team. To him, it’s vital that he and the older players begin embracing leadership roles to aid in the development of freshmen who are already beginning to show their potential.

“We do have a lot of freshman coming in that I think can step up and play right away for us, and make an impact on the team. It’s important for us to try to mold them into the best players that they can be for us,” Duhé said.

After losing so many key components from a squad that enjoyed success in 15-player tournament action last season, team coach Jerry Malina is welcoming the presence of newcomers who can provide immediate contributions.

“I’m just getting to know the freshman but I am excited at their size and skill. There are five or six who could contribute immediately,” Malina said.

Some of these freshmen are providing the team with more than just depth. According to Malina, they have already helped the team gain more of a physical presence.

“We were a smaller team last year compared to our opponents. We have several big incoming freshmen who should bring more physicality to the team,” Malina said. “As a club sport with no access to the strength and conditioning facilities as a team, fitness is always an issue to focus on.”

As Duhé takes on the task of molding these freshmen into players capable of filling the shoes that he and the rest of the seniors leave behind, he believes that the rugby program is in a better state now than it was when he was a freshman four years ago.

“It started off kind of shaky with coaching issues in the earlier years, but I feel like we’re starting to get it back,” Duhé said. “I think we’re on the right track. I’m excited.”

Chalk up Duhé’s sense of optimism for the rugby program to one person — coach Malina.

“He’s one of the best coaches I’ve ever had. I can’t say enough good things about him. He’s a great coach,” Duhé said. “He’s never one to yell and he always gives constructive criticism which you need in a coach.”

Now a senior, looking back, Duhé is glad he took the opportunity to join the team as a freshman.

“It’s definitely been a good thing to be a part of. A big part of the game that a lot of people don’t realize is that it’s a very social game,” Duhé said. “After the game we go and hang out with the other teams, so you beat the crap out of each other for 80 minutes and then you go say, ‘hey, what’s up’, and you talk to them and it’s a community. I’m very happy that I did that here.”

Malina and Duhé are preparing the team for battle with one thing on their mind as the fall season inches closer and closer — getting back at the only team that beat them a year ago.

“Our only loss was to LSU-Alexandria and we would certainly like to redeem that. I think we play them in November or late October. That’s definitely on the minds of everyone on the team,” Duhé said. “We’re definitely trying to avenge that loss.”