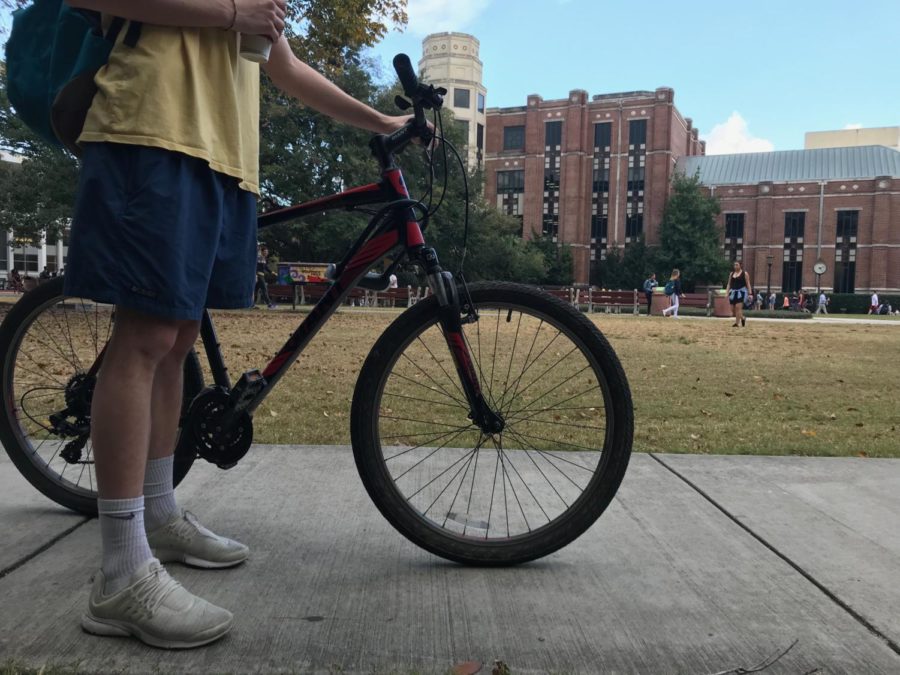 A student walks his bike to the bike rack by the West Road garage. Many students commute to campus via bike daily, one that includes numerous potholes, tight one-way streets and oblivious drivers. Photo credit: John Casey

Commuters who decide to bicycle to Loyola face a number of hazards, according to community members who attended the Fair Share vs. Lion’s Share meeting in Nunemaker Auditorium.

The purpose of the event, held on Nov. 15, was to engage the Loyola community in conversation regarding the risks motorists and cyclists face when sharing roads.

Chris Schaberg, English professor and faculty member of the environmental program, invited Jonathan Maskit, a professor from Denison University, to facilitate a discussion earlier this month about cyclists’ rights at the event, which was co-hosted by BikeEasy and the environment program.

Schaberg explained that he invited Maskit to host not only because of the topic’s relevance but also because of his comprehensible dialogue.

“I heard Maskit give a talk on bicycles at an environmental humanities conference in Detroit last summer, and I thought his insights would be useful to bring to Loyola. His presentation style is relaxed and inviting, and he doesn’t use heavily academic language,” Schaberg said.

The conversation gave those in attendance an opportunity to engage in discussion about solutions or alternatives, like implementing an increase of segregated bike lanes, to increase safety in New Orleans.

Schaberg expressed that while he enjoys cycling, he does have concerns associated with nearby motorists, an opinion most members at the event shared.

“There are distracted drivers, potholes and wild intersections — those things make New Orleans a bit less friendly to cyclists. As long as I follow one-way roads, obey the traffic laws and use the bike lanes, I find New Orleans to be fairly bike-friendly. I commute most days with my daughter in a bike trailer (taking her to preschool), and I love moving through the city this way, but it certainly has its risks and danger zones,” Schaberg said.

Ella Hall, environmental science junior, echoed Schaberg’s sentiments. Hall explained that she attended the event because she recently purchased a bike but also to support the environment program.

“There aren’t any super structured bike lanes and you never know what the driver of a car is going to do or if they see you,” Hall said.

The environmental roundtables are a recent addition to the environment program. Open to the public and usually scheduled during the window period, they were established as an opportunity for students, staff or invited guests to lead conversations regarding specific current environmental issues. The discussions are hosted by a broad range of individuals amongst many disciplines, offering a chance to cater to many interests.

“I know I’m biased because I’m in the environment program, but I think the roundtables are generally just important because a lot of times, the speaker has very relevant information that I feel like people should learn,” Hall said.

“To me the roundtables are an excellent opportunity for students to practice engaging in public forums concerning environmental issues across disciplines and beyond academe,” he said.