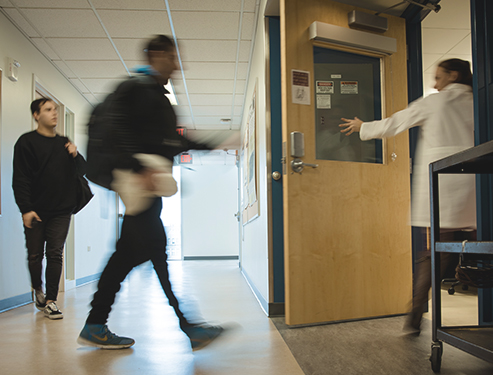 Students Rush to an anatomy and physiology lab Jan. 12, 2018, in Monroe Hall. The 12:30 class had seven students waitlisted that day. It had one of the largest waitlists at the time. Photo by Julia Santos. Photo credit: Julia Santos

When political science senior Max Heimburger set his alarm at 8:30 a.m. on the day of senior class registration for the spring semester, he already had his whole schedule planned out. He was going to keep his Monday and Wednesday afternoons open in order to spend time at his internship at a law firm in downtown New Orleans. However, before Heimburger even got a chance to register, the online religion class that he needed to complete his common curriculum was full, forcing Heimburger to take a religion class during the afternoons that he had kept open for his internship.

“I found the whole thing kind of ridiculous,” said Heimburger. “I planned ahead on what my course would look like when I was a sophomore, so to have that plan be thrown away by the school’s registration order policy, was just absurd.”

Heimburger, like multiple other seniors, missed out on getting the ideal spring schedule that he wanted because of Loyola’s class registration order, which, unlike other schools, prioritizes freshmen and a priority list of students over the seniors.

This year however, more seniors have expressed frustration about not getting needed classes than any senior class has since Loyola began arranging the senior class behind the freshman class in registration in 2015, according to Kathy Gros, Loyola University’s director of student records and registration services.

International relations senior Mackenzie Simmons is another student who wasn’t able to take the classes that she wanted because of the class registration order.

“Having to wait and go after the freshmen is a little bit nerve-racking, especially for those seniors who didn’t yet complete all their common core classes,” she said. “By the time I registered, there were a lot of courses I thought, ‘this would be fun to take,’ but by the time I could register there were already about 10 students on that waitlist.”

Simmons was also put on the waitlist for two of her required classes to graduate, but eventually got off of them and into her classes.

Loyola’s decision to put the freshmen ahead of the seniors in registration order was mostly a retention issue, according to Gros.

“We wanted to make sure the freshmen got the classes that they wanted, but in hindsight, the seniors were the ones who really suffered, this year especially,” said Gros. “I’ve had a lot of seniors come to me and say, ‘I’m not getting my classes. I need to graduate.’ I can pretty much guarantee these students that we’re not going to postpone your graduation because you can’t get a class.”

Because of the increased number of waitlisted seniors, Loyola’s Registration Services Offices has been working with professors and the waitlisted seniors in order to open up more seats in these required classes and get those seniors off the waitlist, according to Gros. A department chair will also open up another section of a course if they see that the waitlist has a large number of students on it.

By the end of the first week of the spring semester, which is when Loyola dropped their waitlist entirely, a total of 12 seniors ended up not getting their waitlisted classes.

“I’m hoping next year we’re going to make a big change in the order that our registrations go through,” said Gros. “I want our priority group to be much smaller and to move our seniors to the front of the line again.”