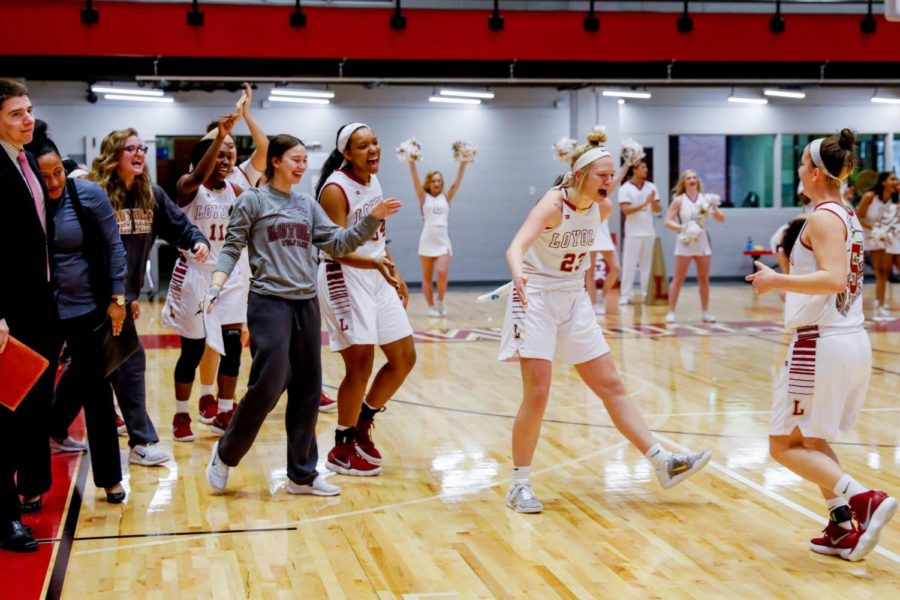 Junior, #23 Megan Worry celebrating with, freshman, #5 Savannah Ralph after the team won the game against Faulkner University in the Den on Jan. 20, 2018. The team is now 13-4 for the season. Photo credit: Jules Lydon

With double-double’s from the backcourt, and three other players in double figures, the women’s basketball team knocked out Faulkner University on Loyola’s Hall of Fame game.

After not competing for over a week, Loyola came back with a bang defeating rival Faulkner University 100-59 continuing their record to 13-4 on a night honoring Loyola athletic legends.

This is the second time this season Loyola has reached the 100-point mark. Despite the long break, the Pack came out strong and showed no rust, shooting over 50% from the floor and over 50% from the 3-point line.

Coach Kellie Kennedy knew her squad was eager to return to the court.

“It was a lot of practice, and they were ready to play,” Kennedy said.

Paige Franckiewicz hit a three to start off the scoring. For the first three minutes of play the Wolf Pack kept the Eagles off the scoreboard 10-0. By the end of the second period, Loyola went into halftime with a 20-point lead 51-31.

“I think we did great, and we worked really well as a team together,” Franckiewicz said.

Paige Franckiewicz, Di’Mond Jackson, Megan Worry, Zoie Miller and Kaila Anthony were the five Loyola players that hit double figures throughout the game. Jackson recorded her third double-double this season, and Worry had a her first double-double of the season, with 12 points scored and 10 rebounds.

“Everybody scored, and it was a complete team victory,” Kennedy said.

With their conference record now at 6-1 and their second seed placement, the Wolf Pack team seeks every opportunity to sit atop the Southern States Athletic Conference.

“It is really important because it determines who goes to nationals, so it is always a big deal,” Franckiewicz said.

She said having the historic win as the Hall of Fame game made the win sweeter.

“It is special because there are a lot of great past Loyola players here. We get to show them that we have carried on their legacy and we are also creating a new one,” Franckiewicz said.

With the incredible win behind them, the team feels confident in their upcoming match ups.

“Many positive steps moving forward. The way we won was great,” Kennedy said.