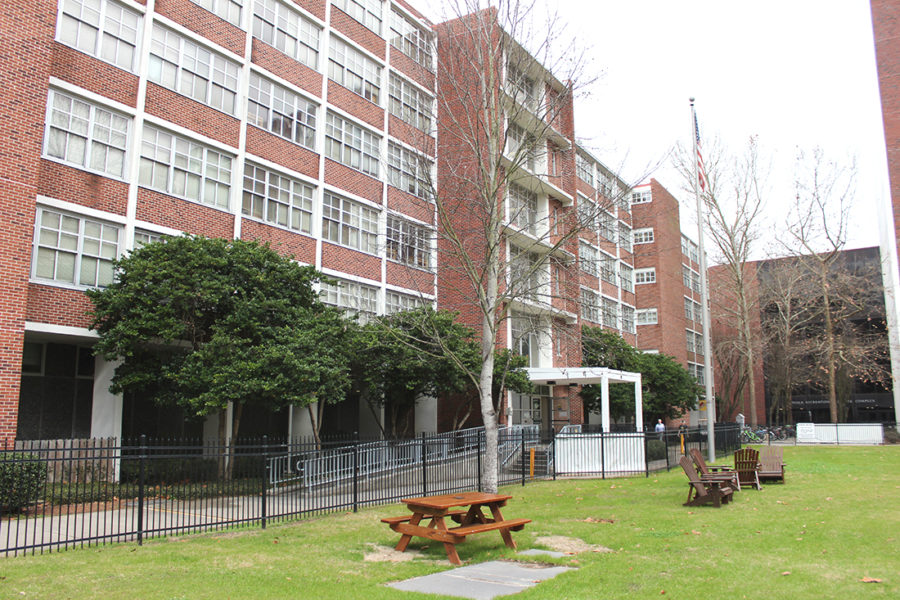 Biever Hall stands tall on a muggy morning on Feb. 6, 2018. As the first home of many freshmen on campus, it develops its own unique culture. CRISTIAN ORELLANA/ The Maroon. Photo credit: Cristian Orellana

It was Michael Olausen’s first weekend of classes as a resident assistant for the university when Hurricane Isaac cut a destructive path over New Orleans in August 2012.

Anyone on campus who could not evacuate before the storm was sent into lockdown in Biever Hall, Loyola’s freshmen-only residence hall, where the sophomore RA was just learning to navigate a building full of recent high school graduates.

For three days, the dormitory, with a maximum capacity of 510 people, was a mandatory home to nearly 600 students — most brand new to college.

“I probably got a combined three hours of sleep,” Olausen said, A’15. “The walls would literally sweat. It was absolute insanity.”

The doors stayed locked even when the power went out on the second day. Aging backup generators provided flickering lights for half that time, and the only food available was peanut butter and jelly sandwiches for every meal.

On the second day, a student smoking in his dorm room set off the fire alarms and prompted a full-scale drug-bust in the middle of a hurricane, officers combing through the whole building to the tune of blaring alarms for hours.

By the time Hurricane Isaac passed and the doors to Biever Hall were unlocked, Olausen said he could have quit that job and not looked back.

Instead, he remained an RA for freshmen until he graduated in 2015. Years later, he still looks back at his three years in the hall as some of the most valuable in his life.

“Biever is the toughest place at Loyola to RA, but it’s also the most fun place to RA, and that’s why I never left. I loved it there,” Olausen said. “Beyond a shadow of a doubt, it’s an extraordinarily unique place. That means many positives and negatives with it.”

It’s nearly impossible to explain Loyola’s freshmen dorms to those who haven’t lived there. The building itself was built in 1964 and renovated in 2000 and named after Loyola’s first president, Fr. Albert Biever. The experience within its halls, however, is much less straightforward. Biever Hall is a melting pot of teenagers from across the globe, all of them leaving home and living alone in one of the most indulgent cities in the world.

When asked to look back at their time in Biever, former residents seem always to jump to the same vulgar laws of the land: bodily fluids in excess, communal everything — bathrooms, sleep schedules and sicknesses — reoccurring hallway vandalism and a hedonistic definition of the weekend.

“It’s the best time that I would never do again,” said Camille Didelot, mass communication senior, who lived on the second floor in 2014.

“It’s everything that college is supposed to be and a whole bunch of what it’s not supposed to be tightly packaged in one gross, sweaty box,” said Alex Asdourian, A’14, who was a freshman in 2011. “Then, take that box and soak it in alcohol and leave it in the bathroom overnight. That’s Biever.”

The hall is ground zero for “Biever fever,” which can be defined by (but is not limited to) a mutated contagious illness or the distinct melancholy that comes from a mixture of homesickness, a poor diet and a lack of sunlight.

Every class that spends time in Biever Hall manages to create their own bizarre, bonding folklore — from fecal phantoms and homeless squatters to the “Bed, Bath & Beyond” room and farm animals raised in secret.

Doors are set ablaze, songs and stories are written, fights arise and fall and friendships are forged that carry on long after people leave those mundane brick walls.

Biever Hall has been a deadly place, a hilarious experience and much more. Every batch of students that passes through is connected by the same circumstances, struggles and victories that make it unlike any other college dormitory in the world.

In the words of English junior Kiera Reeves, it’s, “…having all your friends right down the hallway, and a perverse sense of community that comes from suffering through your own stupid choices together.”

As the university continues to emphasize enrollment growth and increased class size, the Biever experience will become more and more exclusive.

“The goal of the university is to build upon the strong enrollment of the class of fall 2017. With this, we have a goal of increasing first-time freshmen enrollment by 4.5 percent from last year,” said John Head, vice president of enrollment.

The Office of Residential Life is no stranger to accommodating larger class sizes in Biever Hall. In 2010 and 2011 they used triple occupancy rooms and even had students shuttle from the University of New Orleans residence halls.

According to Amy Boyle, director of residential life, tripling up rooms in Biever is an option for next year’s first-year class, an action that has not shown negative effects on retention in years past. For now, the two-year live-on-campus policy will remain.

While class sizes are set to increase in the coming years, the circumstances that define the Biever experience will help freeze the charm of the hall in time — a permanence that Olausen, who now lives in Hawaii, enjoyed every moment of.

“That was Biever; that’s the beauty of it,” Olausen said. “You might get puked on, there’s going to be some bodily fluids involved, but after you’ve done the experience and get through, you’re set for life in conflict management and sharing space, all these great skills in your life that are forged in this place in New Orleans when you’re 18.”