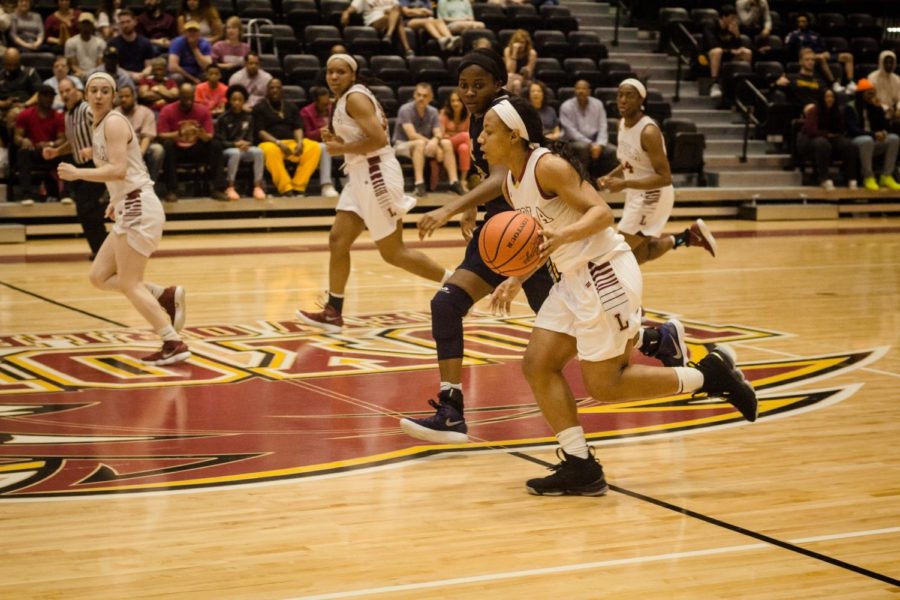 For Di’Mond Jackson, college basketball has thrown its fair share of obstacles her way. However, her resilience has driven her to success as a leader for the Wolf Pack team.

The biology senior played ball in a couple of places before being a part of the Wolf Pack.

Jackson graduated from University Lab High School in Baton Rouge and left her home state when she committed to play basketball at Arkansas Little Rock University in 2014.

Jackson’s time playing on the D-1 level came to a halt after she suffered an ACL injury midway through her sophomore season.

Jackson decided to transfer after her injury, paving a path for her to reunite with a familiar face, Loyola’s women’s basketball head coach, Kellie Kennedy.

“Coach Kennedy had recruited me when I was in high school,” Jackson said.

Having that familiarity with Kennedy was a draw for Jackson, but the success that Loyola’s basketball program is known for sealed the deal.

“It helped knowing that Loyola’s a championship program,” Jackson said. “My decision was based on ‘I want to go somewhere and help a team that wins’. I just wanted to actually be someone that’s valued and Loyola provided me that opportunity.”

Jackson was looking for something different than her out-of-state university and decided to be a member of the Wolf Pack.

“She wanted to be closer to home, and I had a relationship with her before,” Kennedy said.

“She was leaving and we were fortunate enough to be the place that she chose to spend three more years.”

Jackson’s transition from playing at the D-1 level to the National Association of Intercollegiate Athletics level was hardly a transition at all, and despite what many think, the two fields of play might be more level than meets the eye.

“Coming from that situation (Arkansas Little Rock University), I thought that it would be easier, but the crazy part is there are a lot of people in the NAIA that could easily be division one. But the thing is it’s almost the same,” Jackson said. “There is no real difference. The athletes are the same.”

During her first year under Kennedy, she finally had the chance to see Jackson in a Loyola jersey as she averaged 5.8 points per game, four rebounds a game, 2.1 assists in the 28 games she played in the 2015 season.

“She’s just really talented. She can do so many things on the floor. We’re a transition team, and she forces us to be better at that. She really has a great way to push the tempo, and she does that from multiple positions,” Kennedy said.

During that same season, the Wolf Pack won the Southern States Athletic Conference outright and clinched a spot in the National Association of Intercollegiate Athletics National Tournament, with Jackson being a contributor to the success.

As a junior, Jackson blossomed in Kennedy’s up-tempo system.

In 2016, Jackson started in 23 games and upped her numbers in almost every statistical category with 9.4 points per game, 6.1 rebounds per game and a team-high of four assists per game.

However, the best was yet to come for Jackson.

On Jan 19, 2017, Jackson’s 10-point, 10-rebound and 10-assist performance against William Carey solidified her as the first player in the conference to record a triple-double since the 2011-12 season.

Jackson was also the first female Loyola basketball player to record the stat line since 2008.

To top it all off, Jackson’s stellar season as a junior landed her on the First-Team All-Southern States Athletics Conference shortlist, and she was not done showcasing her prowess as a gifted all-around player.

On Jan. 4, 2018, Jackson recorded yet another triple-double with an 18-point, 12-assist and 11-rebound performance that fueled the Wolf Pack to a crushing 117-55 victory over Brewton-Parker.

“She manages to get double-doubles and triple-doubles a game and at one point she was the only NAIA player in the country to get a triple-double. That’s incredibly hard to do,” Kennedy said. “You’ve got to be doing a lot of things really well to do that, and you have to have people around you doing things well too, which helps.”

Jackson’s numbers have increased in every statistical category every season she’s been at Loyola. This year, Jackson is averaging 11.6 points, 5.3 assists and 7.5 rebounds, all career highs for the senior guard.

“I wouldn’t want to deal with her on someone else’s team. So I’m just really glad she’s on our team,” Kennedy said.

With all of her success, Jackson said she has no one else to thank but her coach.

“(Kennedy) gave me a chance when I really needed one. She’s the one that made me realize that I can do whatever I wanted.”