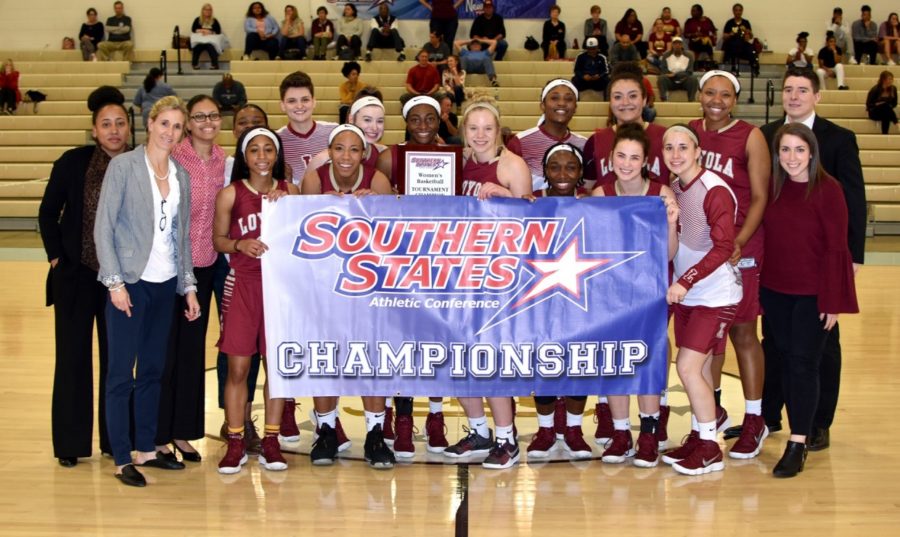 The 2017-2018 Loyola women's basketball team poses with the championship banner after their 66-53 win versus Martin Methodist. The program celebrates their third championship in four years. Photo credit: Loyola University Athletics

To claim their third title in the past four years, the Loyola women’s basketball team defeated Martin Methodist Univerisity, 66-53 in the Southern States Athletics Conference Championships.

The victory was secured by the senior duo Zoie Miller and Di’Mond Jackson.

“It feels great. We’ve worked for this all season,” Miller said. “‘It’s a feeling that never gets old.'”

Miller lead her team to victory coming off of her Southern States Athletic Conference Player of the Year award.

The senior guard knocked back Martin Methodist as the conference Defensive Player of the Year led the defensive end to keep the Red Hawks shooting 30.1% for field goals and 12.5% beyond the arc.

“Relying on each other and working as a team is what brought us to this victory,” Miller said. “We shared the ball and played for each other.”

The team owed a lot to their senior leaders but also to their star on the bench.

Now with another championship ring and a banner in The Den, the Loyola team is looking toward their next challenge: the National Association of Intercollegiate Athletics National Championship.

“This conference championship title just motivates us to go even harder for Nationals,” Miller said. “Although we won conference, we are not satisfied. We want a national title.”

The team is looking to replicate their play from the conference tournament to nationals and they hope they see the same results.

“We are focused on building off of how we played in conference,” Miller said. “We worked well as a team offensively and defensively. We believe if we bring that same energy to Nationals, the sky is the limit.”