Rugby is a Duhé family affair 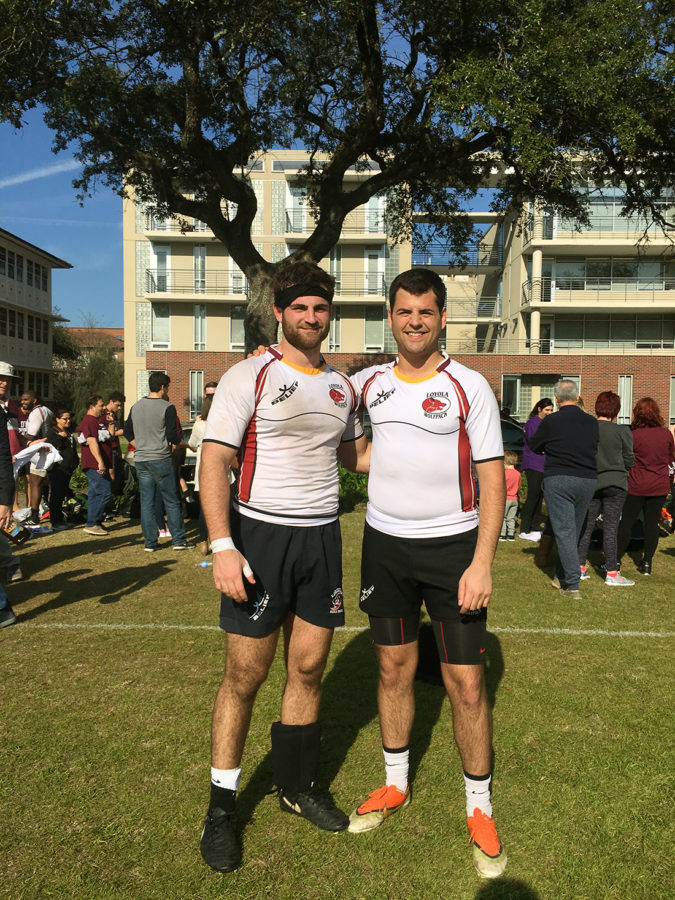 Brothers, Vincent Duhé, history senior, and Lester Duhé III, A'17, have played rugby together through their time at Brother Martin High School and Loyola. Vincent Duhé is the team's captain in his final year on the team. Photo credit: Sonya Duhé

A sport is always a family affair. A father passes down his love and passion for the game to his sons and an older sibling does the same to their younger brothers and sisters. Sports can captivate an entire family, much like rugby did with the Duhé family.

When they were children, Vincent Duhé, history senior, and his brother Lester Duhé III, A’17, fell in love with rugby while attending their father’s practices and matches. Their father, Lester Duhé Jr., played rugby in college at Louisiana State University and continued playing with the Old Boys rugby team after graduation.

His sons shared the same love for the physical and demanding sport, and they both played rugby for their high school team at Brother Martin High School and then, just like their father, they took their talents to the college level.

“I got offered to play rugby at Loyola, and I couldn’t pass up the deal,” Lester Duhé said. “Then, I finally got to recruit my brother when I was a freshman and he was a senior in high school, and when he came that was really special.”

Once the elder brother recruited the younger one, they were overjoyed to continue the family tradition of playing college rugby.

“I was excited to start playing in college especially, with my older brother, and also to be a part of a good group of guys that were here when I first joined the team,” Vincent Duhé said.

Lester Duhé recalls how special it was for him to have the chance to play on the field with Vincent Duhé as a member of the Wolf Pack.

“I remember that first time that we were both on the field,” Lester Duhé said. “We bumped chests and said ‘what up, brother’. It was just a special feeling, being able to play with my brother at the same university.”

Not only were the brothers a part of the sport, but their mother was too. Sonya Duhé, director of the School of Mass Communication, also has ties to Loyola rugby.

“My mom is the faculty adviser to the program,” Vincent Duhé said. “So I guess you could say it was a family affair.”

Sonya became the sports adviser in 2013 when Lester Duhé began his Loyola rugby career, and she has experienced a mixture of concern and joy when seeing her sons compete.

“I’m worried sick the whole time because of injuries, but when you’re a mom, you have to learn to enjoy those things because they make them happy, they make you happy,” Sonya said.

Although Lester Duhé lives in Lafayette, Louisiana, he still roots for his younger brother.

“The young players and his teammates really look up to [Vincent]. He’s a competitor, a great rugby player, a great person, and I think with him as the rugby captain, they can go very far, because he is one the best rugby players that I have ever played with,” he said.