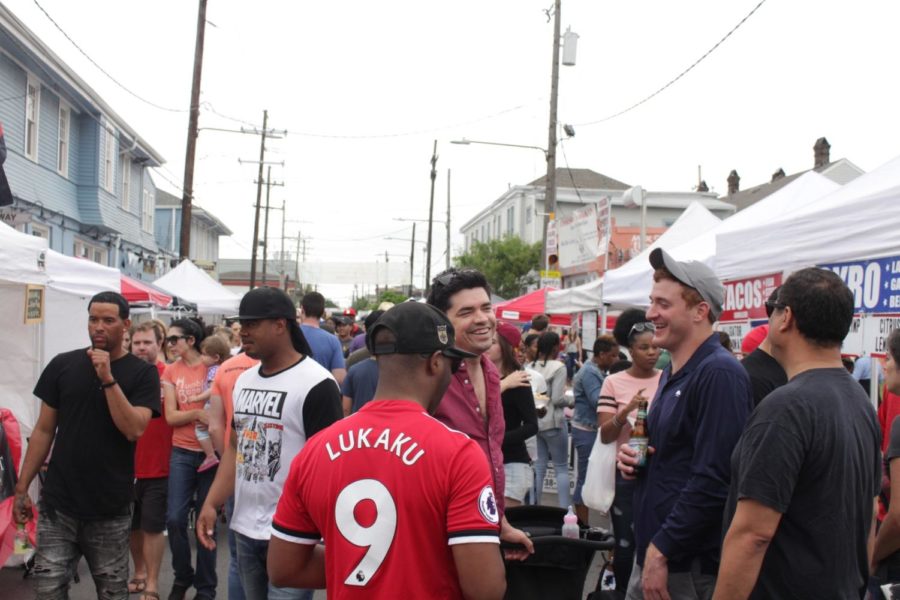 Festivalgoers mill through the vendor tents on a cloudy Saturday afternoon. The expected rain did not take place, and the festival proceeded as planned. 7 April 2018. Photo credit: Caleb Beck

Locals feared heavy rain would wash out the Freret Street Festival, but were pleasantly surprised when the event went on without a hitch.

On Saturday, April 7, Freret Street was closed down from Valmont Street to Napoleon Avenue to make way for the bustle of 200 vendors, 17 music acts, over three stages and thousands of locals.

With dark clouds overhead, the colorful festival had everything from delicious food, like whole watermelons, snow cones, and fresh-baked sourdough bread, to the vibrant performances of the Mardi Gras Indians.

Rhys Steuart, music industry senior, came to the festival with a local’s ball python draped around his neck. He said that the festival perfectly followed New Orleans festival protocol.

“The combination of music, art and crowds feels like spring has started in the city,” Steuart said.

On the other side of the street, at the Oschner Baptist Stage, Capoeira New Orleans was in full swing, and young students presented the Brazilian martial arts to a sea of onlookers, backed by traditional instruments.

Coordinator Colleen McLellan said that seeing Capoeira in the streets was as entertaining for her students as it was for the crowd.

“We didn’t expect so many people to dance with us like they did. Small festivals bring such a freewheeling environment for us to share our craft,” McLellan said.

Freret Street Festival has been an April event for 20 years, even when the economy and appearance of the street has changed considerably.

Michael Dax, who has lived off of Freret Street for 10 years, said the festival is a constant he looks forward to.

“The way the street pops in April compared to its sleepy neighborhood winter is the first sign for me, along with the jasmine, that festival season is in full swing,” Dax said.