Pelicans preparing to take on Trailblazers 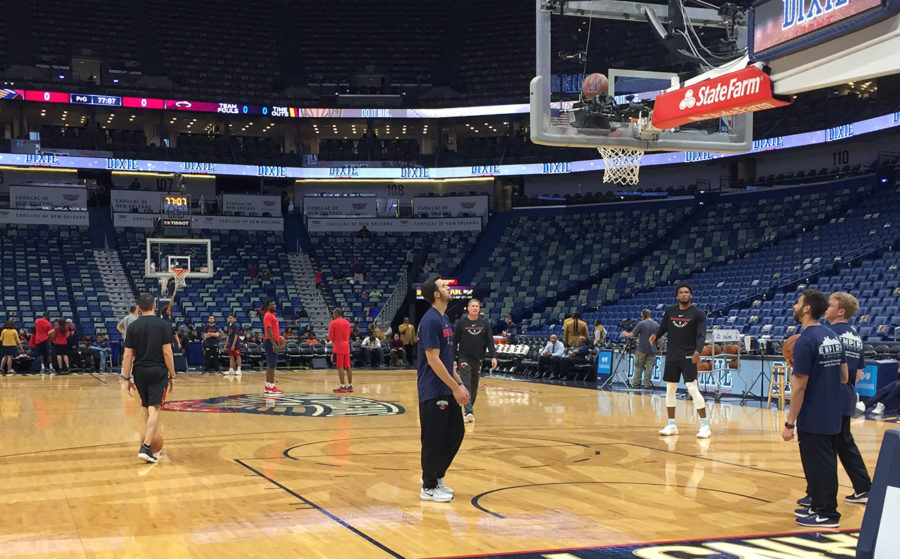 The New Orleans Pelicans warm up before facing off the Miami Heat at the Smoothie King Center Feb. 23 2018. The Pelicans are riding a sic game win streak and are now sitting as the fifth seed in the Western Conference. Photo credit: Albert Dupont

The first game of the seven-game series between the Portland Trailblazers and the New Orleans Pelicans starts Saturday, April 14.

The two teams had an even season series this year splitting the four games 2-2 with each team winning a home and road game.

The Pelicans like to play fast and in transition and ended up finishing with the highest pace in the league during the regular season according to basketball-reference.com.

However, the common trend in the NBA is that the pace tends to slow down in the playoffs.

The Pelicans will also be going up against a good defense as the Trailblazers finished with the eighth best defensive rating in the league.

That defense may be especially equipped to deal with the Pelicans offense since Trailblazers have the most effective transition defense of any playoff team. They hold opponents to the second lowest effective field goal percentage in transition, behind only the Brooklyn Nets per NBA.com.

The matchup between guards Jrue Holiday and Damian Lillard figures to be key coming into the series.

Holiday has been effective on offense too, averaging a career-high 19 points per game to go along with six assists.

While his offense is important, one of the keys for the Pelicans is how well Holiday can guard Lillard. Holiday is all over the board on defense. He ranks 10th in the league with 3.2 deflections per game and contests 4.3 three-pointers per game, fifth most in the NBA. Opponents shoot 2.3 percent worse than their average when Holiday guards them.

The Trailblazers are going to have to try to shut down All-Star Anthony Davis. Davis has been one of the most effective offensive players in league averaging 28.1 points per game, the second-highest total.

The Blazers only played Davis two full times this year as Davis missed one game entirely and only played five minutes in the other. However, in both the games Davis did play he scored 36 points.

Trailblazers center Jusuf Nurkic will likely spend a decent amount of guarding Davis during the series. Nurkic is a more traditional center listed at seven feet and 280 pounds. He has had a good defensive year rating well in advanced metrics with 3.9 defensive win shares in the regular season. However, Nurkic will have to compensate for the speed disadvantage he will be at against Davis, as the Pelicans star has shown to be quicker on the floor.

Another two players to look out for is Trailblazers guard C.J. McCollum and Pelicans forward Nikola Mirotić.

Mirotić in particular has caught fire lately. Ever since shaving his beard on April 4, Mirotić has averaged 25.8 points per game including shooting 46.5 percent from downtown in the final five games of the year. If Mirotić can carry this play into the playoffs it will be huge for the Pelicans.

McCollum has been dangerous all year long averaging 21.4 points per game. McCollum has also shot 39.7 percent from behind the arc this year. His performance will be important in the series since he’s been the second leading scorer for the Trailblazers this year.

The first game of the series in the Moda Center in Portland will start at 9:30 p.m. central time. The winner of the series will go on to face the winner between the San Antonio Spurs and the Golden State Warriors.