Informed Consent deals with science and religion coming to a head 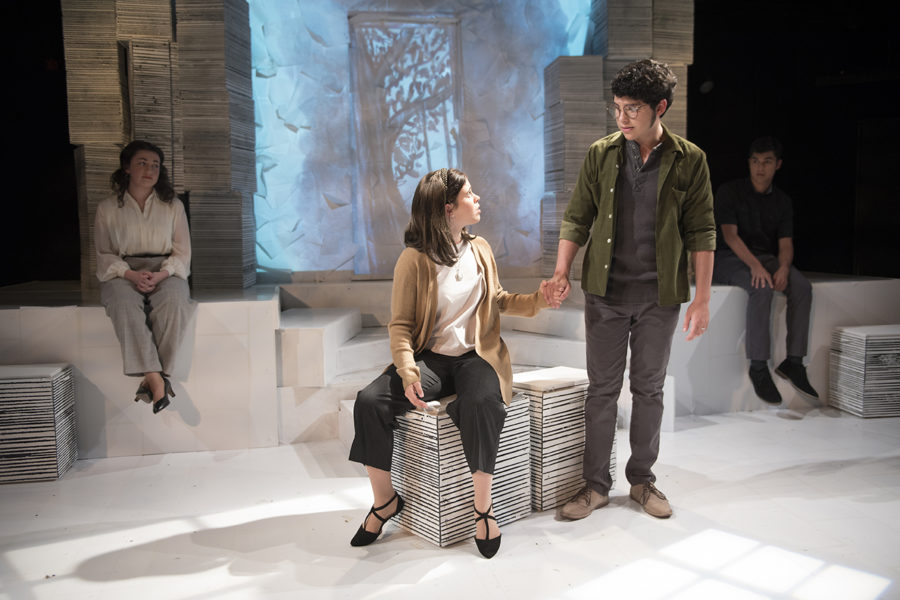 Two actors gaze at one another mid-performance on the set of “Informed Consent”, directed by James McBride. The play focuses on themes at the intersection of religion and science, a fitting topic for a Jesuit university to examine. All of the backdrops in the play are original student works in the place of traditional scenery. Courtesy Photo credit: Kyle Encar

“Informed Consent,” written by Deborah Zoe Laugher, is at the intersection of medicine and ethics, according to McBride. Laugher was inspired by a real-life lawsuit against the University of Arizona after genetic anthropologists used a Native American tribe’s blood to track their migratory patterns, revealing scientific contrasts with the tribe’s deeply held beliefs about their ancestry.

“That was the jumping off point for the play,” McBride said. “There’s also a storyline in the play that was completely her own creation.”

McBride, A’12, has spent the last six years working everywhere from New York City to a regional theater in Denver. Despite his travels, McBride said he is happy to be back in New Orleans and excited to be working on this show in particular.

“I approached this show with questions about my own journey, with my sense of spirituality and religion and balancing that with existing in the modern world,” McBride said.

He described the play as being about science and religion coming to a head, a topic McBride said a lot of people experience in life.

“I think there are questions that we all sort of have to wrestle with,” McBride said. “And that’s one thing I really love about this play – it provides space for those monolithic ideas to stand in a room and talk to each other.”

As an alumnus of the theater program, McBride said he uses what he learned at Loyola in every way when it comes to his directing. McBride said the department’s heavy emphasis on research is beneficial.

McBride said the department’s strengths are “approaching work not only from an artistic point of view but also an academic point of view, with the Jesuit ideals of this university, to be socially just.”

One of the unique aspects of this production is its set design. Grace Jinnah, studio art sophomore, drew all the set pieces that were then projected onto the stage.

“Projecting the set onto the stage is relatively new in theatre, so we were all learning throughout the production,” she said.

Jinnah used India ink and chalk to create an artistic effect that provides a “sketchy” atmosphere to accompany the theme of the play.

“The stage itself has texture, so seeing my paintings projected on the stage was a completely new experience with a new sense of life,” she said.

According to Jinnah, technological advances have allowed new art forms to thrive and advance mediums which already exist.

“The projections aid the storytelling quality through their flexibility. The light of the projector gives the stage a completely fresh narrative,” Jinnah said.

“Informed Consent” runs April 19 through April 21 with performances at 7:30 p.m. in the Lower Depths Theatre in the Music and Fine Arts Building.