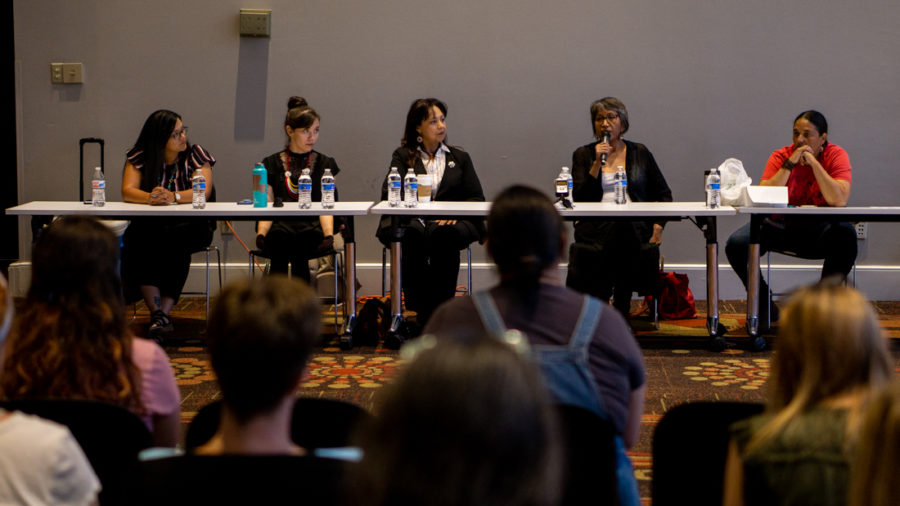 Women from the Houma and Lakota nations share their knowledge of how their communities have been treated by the U.S. Government both historically and currently at the Perspectives of Indigenous Women panel. The panel was held by Students Against Sexual Assault and the Women’s Resource Center and funded by the Diversity and Inclusion Committee. Photo credit: Jacob Meyer

Loyola students had a chance to be enlightened with stories from different cultures in the comfort of the St. Charles room.

Perspectives of Indigenous Women was a panel held on April 30 in the St. Charles Room of the Danna Center. The event included five Native American women who discussed a variety of the problems and hardships of indigenous communities and women of Southeast Louisiana.

“Indigenous women . . . are so often left out, glossed over, erased, and ignored,” la Joy said. “This event is literally and figuratively designed to give a voice to those indigenous women and provide a platform for them to talk about the issues facing their communities and all of Louisiana.”

One of the first issues discussed by the panelists was the effect of the oil and gas industry in Native American communities.

“This industry has been destroying our people and our lands,” said White Hat.

Land loss, as well as federal recognition, was discussed by the panelists. Billiot, Parfait and Chaisson are all a part of the United Houma Nation tribe in Louisiana and they discussed their struggles receiving federal recognition as a tribe. The tribe is state-recognized but not federally recognized, Parfait said. Because of this, the tribe is limited in many aspects, such as not having many scholarship opportunities for their students, according to Parfait.

Many of the women were passionate about environmental issues such as coastal erosion. White Hat stressed that we cannot continue to be dependent on the oil and gas industry.

“We have to turn that battle and that struggle into protecting Mother Earth,” White Hat said. “We have to change our mindsets.”

“It’s a prevalent problem, and it’s one that’s very difficult to deal with,” said Parfait.

Parfait runs the Stop Domestic Violence program for the Houma tribe. When asked whether she was hopeful about issues of domestic violence within Native American communities being addressed through the #MeToo movement, Parfait said, “I’m hopeful, but to be honest, I’m not optimistic solely because I have seen these types of movements just ignore black and brown people before.”

Rodriguez further stressed the significance of being inclusive.

“It’s important to us that we are intersectional and including women across the United States, as well as giving them the voice and the opportunity to talk about it,” Rodriguez said.