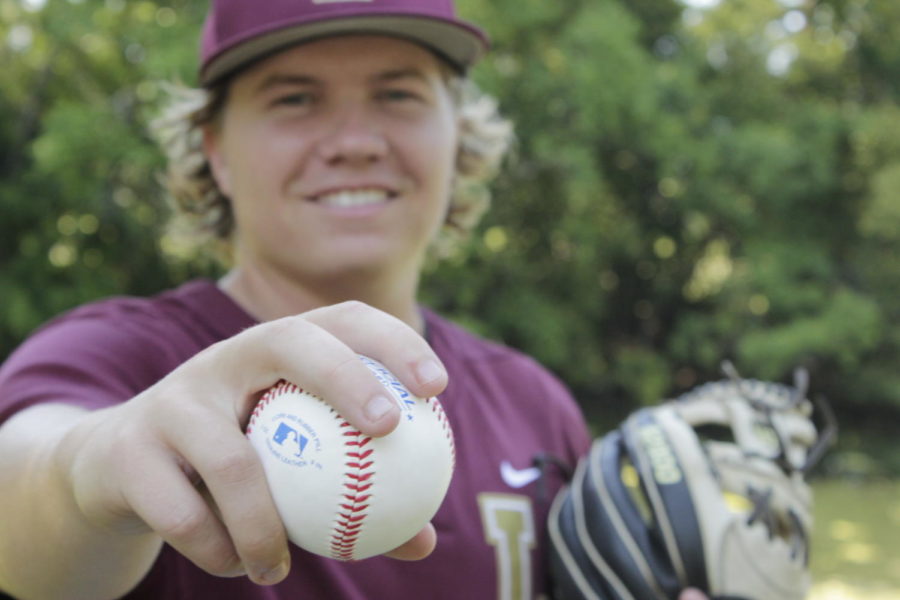 Joseph Kulcher, marketing senior, reflects on his last moments in a maroon and gold uniform. Kulcher leaves Loyola after four years spent on the team and a career in marketing in his future after college. Photo credit: Jules Lydon

Graduation is moving closer and closer each day for college seniors. For marketing senior Joseph Kuchler, this means the ninth inning of his baseball career.

Kuchler is on his final days at both Loyola’s campus and the baseball diamond at Segnette Field.

He began his Loyola career in 2015 coming from Grace King High School in Metairie. Since joining the Wolf Pack as a freshman, Kuchler has played for Loyola’s baseball team starting off as an infielder and moving up to become the Wolf Pack’s lead man on the pitcher’s mound.

Through his time at Loyola, Kuchler has learned many things about being a student-athlete, one of the most important being balancing class work and baseball.

“Being a student comes first. We are here to get a great education, a degree, and then a job,” he said. “Baseball was a privilege.”

He has gained a wealth of experience throughout his year in a maroon and gold uniform, one of which was the eye-opening realization of how stiff the competition could be.

“The National Association of Intercollegiate Athletics doesn’t get enough credit for the competition it has,” Kuchler said. “Any team could beat another on any given day.”

As Kuchler’s time playing baseball for Loyola comes to an end, he plans to stay in close proximity to peanuts and Cracker Jacks.

Kuchler currently has an internship with the New Orleans Baby Cakes, a AAA-affiliated team to the Miami Marlins. “My plan is to make the necessary connections through the Baby Cakes,” he said. “I have already made a ton that can get me to where I want to be.”

As a native of Atlanta, his dream is to market for his favorite baseball team, The Atlanta Braves. However, Kuchler is open to do marketing for any kind of group.

Despite all that awaits him after graduation, Kulcher will still miss Loyola and playing baseball. For Kuchler, his graduation will be both an emotional and life-changing ride.

“I’ve been playing baseball since I was three or four years old so it’s hard to say goodbye to something that’s been a huge part of my life,” Kuchler said.