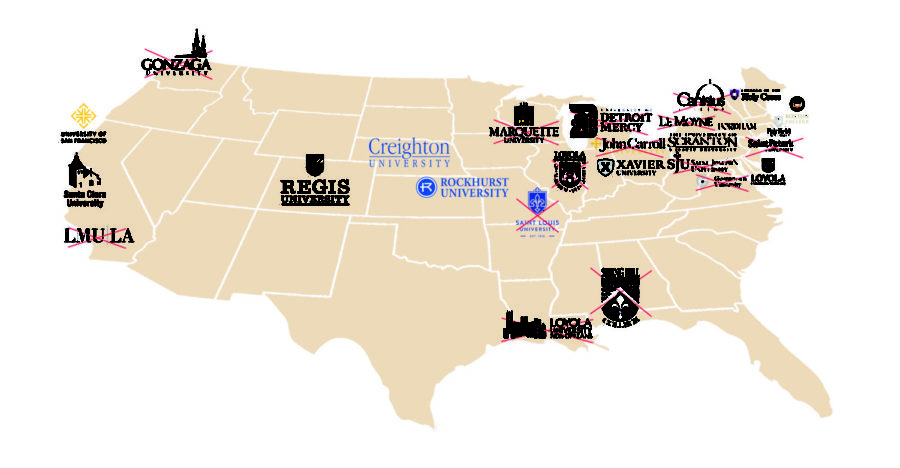 Illustration of all 28 Jesuit universities in the U.S. 15 of the 28 universities no longer have a Jesuit president. Photo credit: Ariel Landry

Jesuit universities have a long history of ordained men as presidents; however, today many are shifting to lay presidents, a non ordained member of the church. Loyola University New Orleans has recently joined this trend by choosing their first lay female president, Tania Tetlow.

Over the years many of these universities have done this with the help of a Jesuit president. Today, however, out of the twenty-eight universities, fifteen currently have lay presidents,  one of which is African-American, Antoine Garibaldi of the University of Detroit Mercy, and three are women (Le Moyne, Loyola Chicago and Loyola New Orleans.) This shift is exciting for many people, but it is also worrying some that these universities might lose what makes them distinct from other colleges, their Jesuit identity.

The shift in leadership moving from Jesuit to layperson can be traced back to the start of the century when John DeGioia was named Georgetown’s first lay president in 2001.

Loyola University Chicago recently inaugurated their first ever woman layperson as president. She is a woman who has excelled in many fields including civil service in 2010 when she worked with the U.S. Department of Defense. Although she may not be a Jesuit she is certainly qualified for the job.

Father Dziak, Vice President of Loyola University New Orleans, said that, although there is a shift in presidents, there is not a shift in values, and if the school does not retain their Jesuit identity with a lay president, they are no longer a Jesuit university.

Dziak also said that students flock to Jesuit universities because of their values and because when they graduate they know that they will have a priceless education that taught them how to value human beings and be able to accurately evaluate situations.

“I love going to a Jesuit university,” said Marilyn Johnson, a senior vocal music education major, “regardless of whether you’re Catholic or not, Jesuit values are based in love and inclusion and anyone can find truth in them.”

“A Jesuit education is what separates someone with a degree in their field and someone whose education values the whole person,” Dziak said.

Despite the shift in lay presidents, Dziak said that the men and women taking over these leadership positions were not chosen on a whim. They are qualified to represent these schools and that there is no lack of qualification or respect for the Jesuit mission.

“Many Jesuits today are moving into other disciplines than administration and it is a numbers game,” Dziak said, “we will pick the person most qualified, and if that person happens to be lay, then so be it.”

Along with Loyola’s new president’s outstanding qualifications, many other universities hold their leadership to similar qualification standards. Georgetown University in Washington D.C.’s president, John J. DeGioia, worked as an administrator and teacher at Georgetown before taking office. Like Tetlow, DeGioia was familiar with the university and its Jesuit values.

Many of the lay presidents work closely with Jesuits to keep the mission and the university running smoothly. Although Loyola has switched to a lay president our vice president is a Jesuit, meaning there is collaboration going on between the two in working with the state of the university.

Many Jesuit universities were created to educate poor immigrants and have been open to people of all backgrounds and faiths because the Jesuit mission is taught to be shared with everyone not only a select few. They are no longer only Jesuit men but other lay people including women. Now, even more, the universities are run by all types of people and ready to educate the whole person.