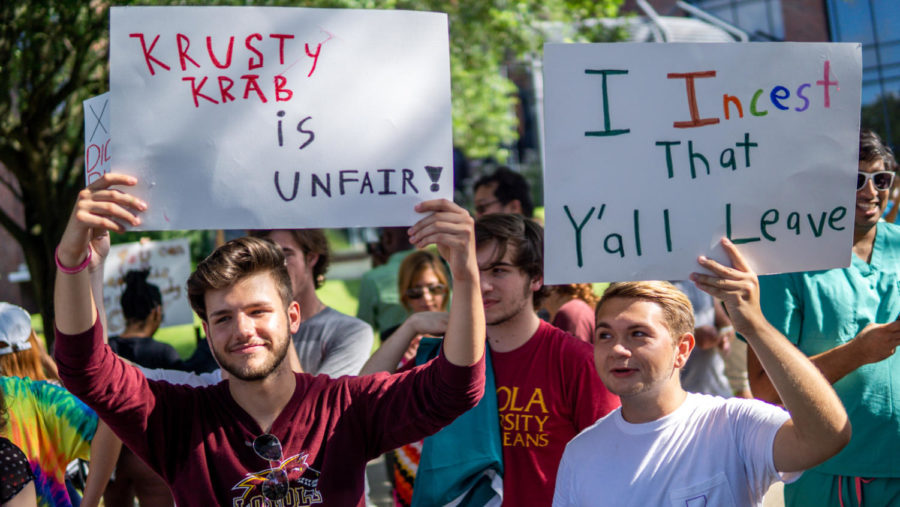 Loyola students and other supporters of the University went out of their way to parody protesting in and of itself, often using puns, pop-culture references, or simple jokes. Photo credit: Jacob Meyer

June 28 is not a date which will live in infamy. No, for those of us in the Loyola community, it is a date which we remember fondly as having welcomed those who purport to bring news of our damnation with open arms so that we could smother them with a message of love and acceptance for all.

The faculty, staff, students and alumni of Loyola University New Orleans and many members of the surrounding community were shocked to hear that to the ‘ministry’ of Westboro Baptist Church had plans to picket at our school in the summer of 2018.

However, a number of curious details accompanied the protest:

2. For an apparently organized protest group, the entourage of four picketers decided to protest an entire block away from where they were supposed to.

3. Ironically, it seems that both Westboro Baptist Church and the LGBTQ+ community share an affinity for outdated New Wave songs from the 1980s, which were sung by the leader of WBC’s picket with modified lyrics.

Indeed, we of Loyola were decadent. We made signs. We freely chose to celebrate each other’s individuality and membership in humanity. We enveloped the picketers and spoke freely with them not to promote their message, but to ourselves understand why they decided to protest at our Jesuit institution.

Most of all, we remained unapologetic. We made no concessions and took no prisoners with our display of the true power of love and the First Amendment. So, as the sun beat down on us and the sweat rolled off of our backs during this rainbow-colored free exchange of ideas, I wondered if it was just the New Orleans summer, or a little piece of our collective soul being spirited away to hell. But then I shrugged, and took another picture of the crowd.