Waldrop takes final vows at Mass of the Holy Spirit 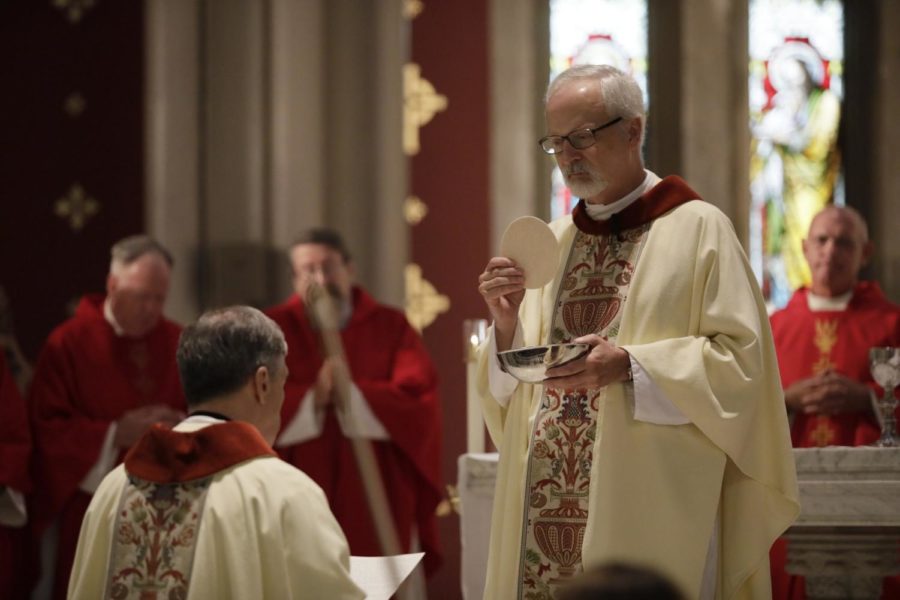 The Rev. Francis Huete, S.J., administers finals vows to The Rev. Gregory Waldrop, S.J., during the Mass of The Holy Spirit on Sept. 6, 2018. Final vows allow for a Jesuit to officially enter the Society of Jesus. Photo credit: Cristian Orellana

For almost 500 years, the Society of Jesus has been ordaining men as Jesuits through the tradition of first vows, but only after years of dedication to the order is a Jesuit invited to enter the order through their final vows.

During Loyola’s 114th Mass of the Holy Spirit, Gregory Waldrop, S.J., took his final vows, officially entering the Jesuit order after 29 years of service on Sept. 6, 2018.

He said his day-to-day life remains the same, but now the Society of Jesus, the name of the Jesuits’ congregation, fully accepts Waldrop into its congregation.

“I’m still teaching and doing pastoral work, I’m still a priest, I still live in the same place. The final vows simply mean that now, after I long ago said yes to the Society, the Society, which has said ‘yes’ to me in countless, provisional ways over the years, now says it definitively,” he said.

The road of full incorporation is a time-consuming journey for a Jesuit. Waldrop recounted his own journey to reach such a momentous occasion.

“I’ve moved around a lot and then also did a long Ph.D. program in art history. Final vows come only after a Jesuit has finished all of his formal education he’s going to do and has worked for a number of years in a particular place. So while it was long in coming, I looked forward to taking my final vows at some point. It turned out to be now,” he said.

Waldrop kneeled before Francis Huete, S.J., who held the Eucharist, the bread and wine Catholics believe is the living body and blood of Jesus Christ, up while reciting the vow formula. Waldrop mentioned how important it was to undergo his vows in front of the sacred sacrament of the Eucharist and the Loyola community.

“There’s always this intimate bond between the Jesuit taking vows and the ultimate sacramental sign of God’s salvific love. Not surprisingly, the Society of Jesus is pretty attached to Jesus,” he said. “There’s no more intense way to be ‘community’ than at the Mass so it was especially meaningful to me to be able to make this public declaration of my commitment at a Mass that celebrates community in a very special way at every Jesuit school.”

Tania Tetlow, university president, also recognized the significance of having the school and community witness the ceremony.

“It was an inspiration for someone to make that kind of total commitment,” she said. “It is really rare in the world today and I think the rest of us can learn so much from that.”

She also recognized the positives of having a Jesuit on campus that underwent his final vows.

“The Jesuits are transformative and being around them and their intellect, their humor and the way they push us, there’s no replacement for that,” Tetlow said. “It’s essential.”